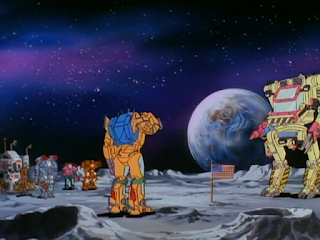 "Defend or perish. We cannot lose. The Terrans must be stopped here. The moon is a dagger pointed at the Earth. It will give them the base they need for an invasion."

One Small Step, aka The Fall of the Neo Sapien Empire Part 1, is the forty-seventh episode of ExoSquad. The title on the screen is The Fall of the Neo Sapien Empire, but the one used for solicitation was One Small Step. I prefer the latter. The ExoFleet launches a full-scale assault on the moon, in preparation for their final liberation of Earth. Typhonus does his best to hold out despite being outmatched, but he only needs to hold out for a few hours. Phaeton launches the bulk of Earth's E-Frames against the ExoFleet, a desperate gamble that pays off for him... until a dying DeLeon impersonates Typhonus and plays to the tyrant's fears. Believing his troops are surrendering, he initiates a self-destruct and the Neo force goes up in smoke. DeLeon also convinces the lunar Neos to surrender before expiring. O'Reilly, Marsh, Weston and the squad mourn their fallen comrade. 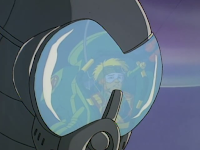 What Works: Wow. Everything. There's so much strong about this episode. Starting with the elephant in the room, DeLeon's death. It's an interesting choice, pairing him with O'Reilly for his final scenes. Makes sense to put the two techies together given what he accomplishes, but moreso it makes her feel more a part of the action. Plus, "tell [J.T.]. I never told Maggie," is a great bit.

The character moments fly fast and furious. Nara and Marsala kick things off. She's understandably apprehensive about what's to come. "No one knows what the future holds. We can only live it as it comes." He also observes that "the perception of time is relative. A lifetime can be lived in three years." They also sneak in a bit of foreshadowing, Nara's worry about what might happen next.

Things continue in this vein. There's an undercurrent of nervousness that's making everyone a little philosophical. Simbacca and Winfield commiserate on being the ones to send young people into battle. DeLeon thanks Bronski for saving all that art while making eyes at Weston, Butler gives his people an appropriate pep-talk ("there's no atmosphere and the gravity's low, so try not to bump your head on the ceiling."), as does Marsh. It only takes a few moments, but it helps ground the episode.

Speaking of kicking off the episode, we open on a flashback to Neil Armstrong, 1969. It's a nice way to kick things off, and plays into the final scene when Torres rights the American flag at Tranquility Park, knocked over in the battle. It's clever to juxtapose the human accomplishment of first walking on the moon with the military accomplishment with taking it back and opening the door to Earth... 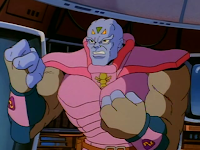 A fact of which Typhonus is well aware. Of all the wonderful lines in the episode, I chose to give the opening of this review to his. He understands the tactical importance of the moon, and incidentally lays it out nicely to the audience. What's more interesting is, his speech works. The Neos under his command battle tenaciously, and this is as tough a fight as any in the series. The Neos are consistently shown as giving as good as they get if not better. 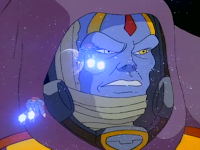 Phaeton's gambit has just the right mixture of desperation and brilliance. It's never spelled out that this is basically him throwing everything but the kitchen sink at the ExoFleet, but I think the idea comes across.This has the feel of a kamikaze mission, troopers sent to battle a space fleet without capital ship support. It leaves Earth vulnerable, but then so does losing the moon. Phaeton cannot allow Winfield to achieve the uncontested high ground of space. Had he succeeded in wiping out the ExoFleet, Phaeton could rebuilt his army faster than the ExoFleet could. Had they merely driven them off, Winfield would still have lost the bulk of his ground troopers and there would be a stalemate.

And what a battle it kicks off! The level of carnage hearkens back to season 1. Neos get toasted, sure, but along the way they're destroying e-frames and capital ships galore. Had the episode not been titled The Fall of the Neo Sapien Empire, one could easily have imagined that the season was going to end with the ExoFleet repulsed. 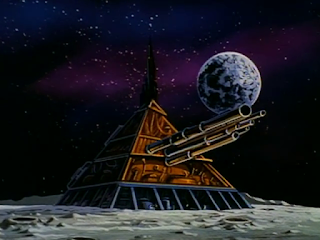 The storming of Typhonus' headquarters is well done, especially Butler's reaction to the news that the e-frames were needed in space. We also get the last bit of Weston/DeLeon banter here, the echo of an  earlier "why, DeLeon, I didn't know you cared." Oh, so sad.  I also love the design of the Neo lunar bases. 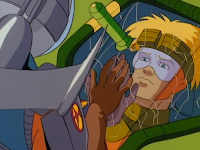 The directing is also fantastic this episode. One aspect I noticed was glass. Many scenes feature a reflection in glass, or hands pressed against it. It gives the episode a nice intimacy.

I'll end things with an amazing speech by Phaeton, I do believe his last. "Of all the creatures who have occupied the earth, it is we, the Neo Sapiens, who have proved most fit to rule. The door to our future is opening, and beyond that door lies the road to greatness. Life is a journey. Every action we take, every decision we make, large or small, is a step on that journey. Only when we take the last step is the final destination revealed. But you have chosen your future! You will not take your final step in darkness, but in the brilliant flash of ultimate sacrifice. As your enemy crumbles before you, you will know that your journey was not made in vain!" The images that accompany it are terrific as well. 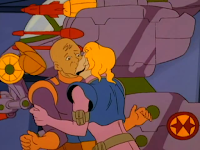 What Doesn't: The fleet isn't expecting action? When Phaeton's thousands of e-frames rise up from the Earth's surface, the episode shows people scrambling from showers, mess halls, etc. They're in the middle of a massive assault, everyone should be ready for action. 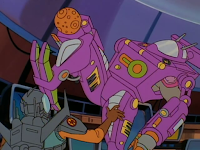 Typhonus decides to, in the middle of the decisive battle of the war, take time out to crush a jump trooper with his foot? If he'd just shot her, the Neos would have won the war. And it looks incredibly awkward. Note that Alec attempting (and failing) to disable Typhonus' frame makes a lot more sense. Presumably the reason they're doing a ground assault on this base as opposed to orbital bombardment is to capture Typhonus alive. 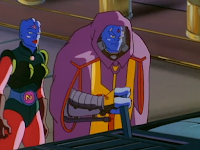 The self-destruct mechanism is too cartoony to me. By this point in Phaeton's degredation, I can just about accept that he might be tempted to use such an option, but it's too big a stretch. And logistically that means that every e-frame has this device built in and no one knows or cares. Also, would activating it really be as simple as pulling an enormous lever?

I mentioned preferring the One Small Step title. This episode feels very much like a stand-alone, unlike the next four which all go intimately together. The overall effect makes it feel as if someone in marketing said "hey, can we end on a five-parter" and thus the odd disconnect between this episode and the next few. This one, in my mind, fits in much better with The Price of Courage and Dark River, making a little trilogy of Phaeton's generals. (Oh, and Phaeton has a terrific line regarding that: "Is it my fate to suffer the idiocy of incompetent generals... Typhonus, Draconis, Shiva... and now Typhonus again!" There's some unintentional comedy here.) 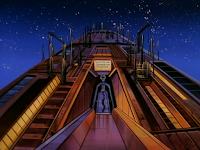 Watch for: Phaeton's bunker shows up here. You can just barely read the words written above the door. They'll show up more prominently in the future. 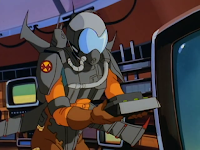 A biggie is Alec's black box, introduced back in Trial by Combat. He makes a big point of having O'Reilly give it to Weston. It will be back. 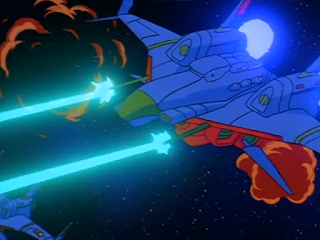 Did'ja notice that, among the combat aircraft, a couple of Pirate fighters were in the mix? We haven't seen them since early season 2, but it's a great touch. There's no point in holding anything back at this point. 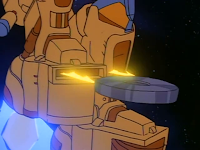 During Phaeton's terrific speech, on the "the door to our future is opening," line, Longfeather fires five explosive disks from his foot to blow a hole in Typhonus' base. If that felt like an odd detail to include, wonder no more. That was one of the action features of his toy.

One of the big scenes in the aforementioned scramble to launch the reserve e-frames is a trooper showering. (One can't help but muse that if this were Japanese anime, the towel would go flying off while the trooper was still in frame.) What's slightly less obvious is the same trooper a few moments later, running to her frame... while tugging on her uniform. Cute touch. 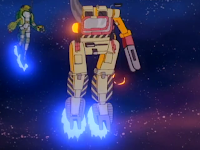 The arm of Weston's frame gets blown off. Five minutes later (and for the rest of the episode), she's fine. That's some mighty fine field repair 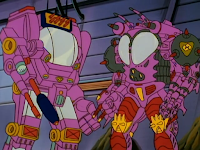 Oh, and I was wrong. Pelligrino's bio was not the only place with a generic version of the Draconis frame, several of them show up here. So much repaint potential, squandered. 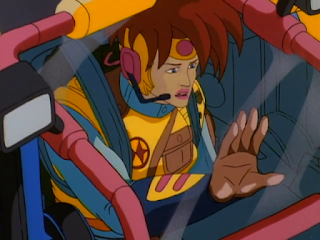 Overall: Wow. This is one of Exo-Squad's best. From the historical context of the opening through the character development to the exciting and costly battle to the lamentations and grieving at the end, it's solid. The big flaw, Phaeton's self destruct, is pretty big, perhaps knocking this from an A+ to an A-, but it's forgivable given the emotional cost to the characters.

Next up... well, it's pretty much in the title. The Fall of the Neo Sapien Empire kicks off in earnest next week.
Posted by Jimtron at 10:00 AM

Pelligrino's bio was not the only place with a generic version of the Typhonus frame, several of them show up here. So much repaint potential, squandered.

This was indeed one of the best episodes in the series. DeLeon's death was certainly a punch.