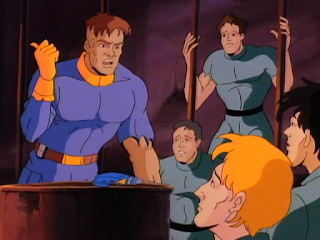 "Come on, it's time we got even! You can sit here and be scared, or you can help send those Neos back where they belong. What'll it be? We've been putting the Neos' weapons together long enough. Let's start takin' 'em apart!"

Fifth Column, A.K.A. The Fall of the Neo Sapien Empire Part 2, is the forty-eighth episode of Exo-Squad. To my mind, despite the title, this is part one of the four-part Liberation of Earth saga.  The Exo-Fleet is ready to liberate Earth, and it's the job of the Resistance to pave the way. Every Resistance cell on the planet is given a target, with a simultaneous start time of 1800 hours CST. The fleet is set to launch their assault, the real assault, two hours later. Tension is high in the fleet as they get ready for what is possibly the final major action of the war. At the appointed hour, the Resistance commits their forces. The Neos are pressed back; they know an invasion is coming, but have little choice but to engage with the Resistance. Napier's cell liberates a Neo Tank factory in Detroit, with the help of the disgruntled slaves, and convinces many of them to take the tanks on a run at Phaeton City Chicago. They get bogged down along the way when the Neo's stage an ambush. Meanwhile, Praetorius feeds Galba information about a possible Neo doomsday device. Galba, obligingly, contacts the resistance to warn them but it's too late; Winfield has committed his troops. 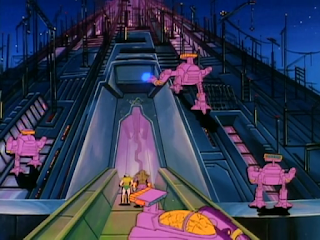 What Works: This is an exciting start to what promises to be the climax of the show. Starting at the beginning, Phaeton is in good form. "I will never leave my bunker again," he declares, as he supervises the final touches to his bunker. (Including the carving of "LASCIATE OGNI SPERANZA VOI CH' ENTRATE" over his door, a slight continuity flub but we'll forgive it.) Livia, perhaps in denial, perhaps in the grip of fanaticism, observes that that won't be necessary once the Terrans are crushed. Phaeton then hears bells ringing in the wind, and goes on an epic rant. "Ask not for whom the bell tolls... it tolls for you Winfield, and you J.T. Marsh. I will destroy you all. Not even a handful of dust will remain for the wind to blow away!" These words will take on an ominous significance a few minutes later... 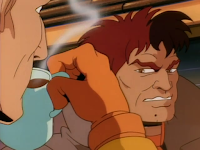 We cut to Winfield, who explains the title of the episode. (This is a kids show, after all.) It's a solid strategy. This, in turn, kicks off a round of tense waiting. The attack is coming, it's coming soon, and everyone in every faction knows it. My favorite moment is probably Wolf & J.T., chatting over coffee and chow. J.T. is perceptive, quickly picking up on Wolf's uncharacteristic worry--not for himself, but for "someone special" in the Resistance. 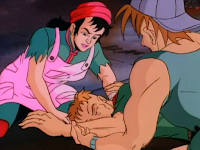 Just before the Resistance assault, we see what Hanley's cell is trying to accomplish--taking out a Neo Tank production facility and securing / disabling the material within. We get a last little bit of Neo cruelty when a worker collapses. "Replace that labor unit" the uncaring facility manager barks. It's interesting  to see them continue to dehumanize the enemy, even at this late stage in the game.

Next comes the fight itself. The  focus is the tank facility. It's a decent fight, and the high point is when one of the slaves leads the other in open rebellion. He even gets a name, Kates, probably the last named character to get introduced in the show. 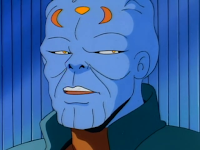 It's right about now that Galba gets played by Praetorius. He feeds him information about a Neo Doomsday device, letting him know that Phaeton would rather blow the Earth up than let the Exo-Fleet have it. Galba may be smart but he doesn't pick up on the fact that Praetorius suspects him. It's nice to see that these characters weren't forgotten about. And this Doomsday device idea is intriguing. A bluff? Something more? 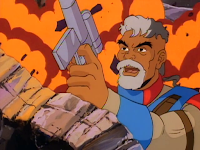 Though the focus of the Resistance storyline is the tank facility, we do get to see fighting in Paris and Sydney as well. It's a nice touch, definitely helps sell the global scale of things. 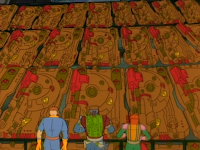 With the Tanks secured, Napier is faced with the problem of what to do with them. Katez lets him know there's no easy way to disable them, but also that they can be operated without a cyberjack. Napier proceeds to rally the slaves, leading them to attempt to liberate Chicago, the Neo capital. I think the Tanks are pretty neat, so it's cool (and a little surprising, given that there were no toys of them made) to see them get a spotlight so late in the game.

Little detail but once the Tanks get on the road, Eve blows up the "Phaeton" in "Phaeton City" on a road sign. A fun little bit of catharsis there. 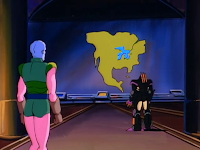 Phaeton seems utterly uninterested in a column of Neo Tanks advancing on his capital, telling Livia to deal with it with a maniacal laugh. He's gone... or is he? Her subsequent ambush gives the episode a little more action, not that it needed it, and the last we see of the local Resistance is them in a pitched battle between Detroit and Chicago. 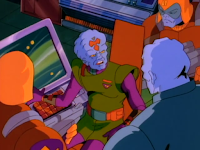 Finally, Galba warns the Resistance, but it's too late. The attack has already started. If this was a bluff, it failed. If not... well, if not, then we're in trouble. Galba is also outed. It certainly took the Neos long enough, but then, he is a genius. "We should have destroyed you with the rest of your brood," Praetorius spits. Great line, and great cliffhanger. Structurally, it's obvious the Neos can't win this fight. They're encircled, and despite their greater production capacity, hampered by their low numbers. We see what happens when the slaves rise up with even minimal support. By introducing the possibility of the destruction of the Earth out of spite, the stakes are kept high even while acknowledging that realistically the final battles in a war are not generally toss-ups. It's really rather clever. 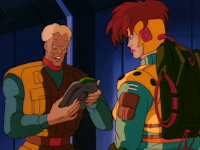 What Doesn't: Ummmm... not too much problematic here. Weston/Algernon exchange is awkward. She gives Algernon Alec's black box, notes that it contain's Alec's memories, and asks him to keep it safe. It's a weird beat. (I'll talk more about it in a few episodes.) 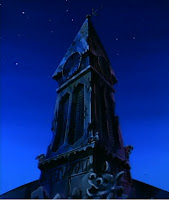 Watch For: The bell tower that sets Phaeton off will show up again, in a completely different context.

Alec's black box, of course, will show up again. 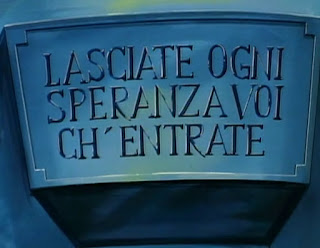 There's a nice lingering shot on the sign over Phaeton's bunker. This is, of course, the sign over the gates of hell, as depicted by Dante. (This image was my screensaver for most of college, btw.) 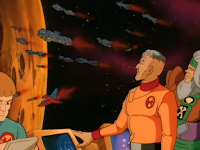 Winfield and Simbacca have another moment, during the waiting. He remarks that he wanted to be a veterinarian, due to his love of horses. That line will get some payoff. 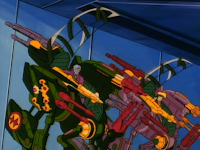 Nara is seen getting into a Rapid Assault Light Attack E-Frame, i.e. the Marsala type, right before the big attack at 2000 hours. She'll be back in her Reconnaissance E-Frame next episode. Also, Weston's in her normal uniform, no helmet. Next episode, that'll change. 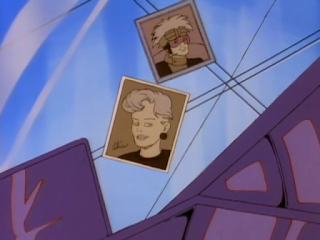 Finally, as JT and the squad get ready for combat, you see that he's affixed a picture of Alec inside his frame next to Noretti. That's a nice little bit of character continuity.

Bio: Nara. Again. This should have been a resistance member, but I don't think there are any.

Overall: Great episode. There's really nothing wrong with it and a lot right with it. Lots of bits of past episodes pay off here, and surprisingly we're still setting bits up for the future. Great way to kick-off the final major storyline.