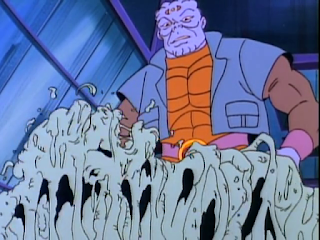 "The last thing to develop are intelligence and wings. You don't need wings to fight... or intelligence."

The Last Jump, aka The Fall of the Neo Sapien Empire part 3, is the forty-ninth episode of Exo-Squad. It backs up a bit from where the last one ended, to a briefing with Able Squad and Charlie 5 platoon. We learn that their target during the liberation of Earth is the Neo Lord breeding complex. As the squad gets ready to deploy, we see a few flashbacks and character moments, before launch. Shortly after the engagement at the Pentagon begins, Able Squad is summoned to the Resolute II to deal with the Doomsday Device situation, leaving C5 to fend for themselves, again. They try to hold out for an evac shuttle, but when it goes down they have no choice but to make a run for it. Cornered by hordes of partially developed Neo Lords, they make a stand at the remains of the Washington Monument before Wolf Bronski rescues them in the Admiral's personal shuttle. Butler get seriously injured during the evac. What Works: The strongest moments in the episode are the characters ruminating right before the big fight. Everyone gets a brief something. Nara clutches her arm (injection sight of Dr. Ketzer's... whatever) and winces. Takagi and Torres share a look. Wolf eats. (No burping)

And then there are the flashbacks. One is quite effective, Weston ruminating on Alec's death with all-new animation. This is especially effective, as it sets up the Butler/Marsh tension coming up in a few minutes, and I love the angles chosen on the Neo pyramid base. The other flashback, not so much.

Galba and Praetorius continue to work wonderfully together. Galba is now Praetorius' prisoner, ordered to the capital to face Phaeton's personal wrath. Praetorius' gloating quickly turns to rage when Galba taunts him rather effectively. His slap is brutal and unexpected, and quite effective dramatically. I rather like how close a thing it is, the shuttle with Galba and all fully-developed Neo Lords getting out just as the assault commences.

Wolf gets shot down in a rather gut-wrenching moment. After Alec's death, and keeping in mind that the series only has a few episodes to go, one thinks that they might actually off him, if only for a second. 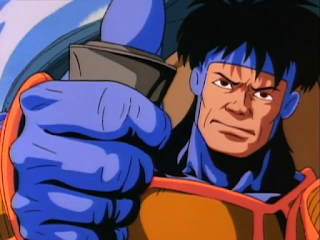 The animation is unusually strong. There are lots of great close-up shots of faces emoting. Here is a particularly nice shot, Kaz doing his ace thing.

The Kaz/Bronski relationship is again shown, when Kaz immediately flies down to Bronski's defense. Bronski, choking on the flames of his own crash landing, mutters "you're the man," recalling The Art of War. Bronski may be the junior partner now, but it's a comfortable relationship.

Butler and Marsh have a brief, but tense, exchange when Marsh is recalled to the ship. I love the play of emotions across Marsh's face when Butler calls him out. "You guys sure don't stick around." He goes from surprised to upset to resigned, all in a matter of a second. You can't blame him for any of it, since he knows he's screwing Butler's people.

As Able Squad flies to the Resolute II, we are treated to a brief view of a few of the Exo-Fleet ships bombarding parts of the planet. One presumes that the total domination of space would be an enormous advantage, and it's nice to see it used.

Praetorius activating all the Neo Lords, regardless of their developmental readiness, is a fun element. Though the squealing Neo Lords aren't nearly as effective as the fully-developed ones, they certainly give the episode a horror-movie like quality. It's a pretty audacious move, sacrificing potent power tomorrow for mediocre power today, but then Praetorius has correctly judged that this is the final battle. Neo Lords in the future count for nothing. 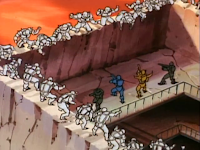 The last stand on the Washington monument was pretty neat. The whole second half of the episode, you got the strong sense that Charlie 5 was screwed, and the final moments, surrounded on top of a tower, pretty much confirmed it. This was, of course, slightly undercut by the audience knowing Wolf was on the way to bailing them out. 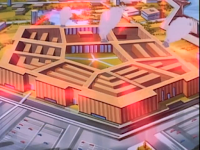 Speaking of monuments, I like that the Pentagon was a Neo facility. The use of real places and structures was always a strength of the show. 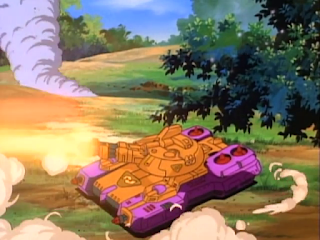 Real places like... Battle Creek, Michigan, where we see another couple of moments in tank battle between Resistance and Neo Sapien forces. What a perfect name for a giant battle.  And I do love me those Neo Tanks. Kates gets name-checked again.

What Doesn't: Though there are many, many great details in this episode, as evidenced above, the overall pacing feels off. With the three flashbacks in the beginning of the episode and all of the Able Squad character development in an episode that seems to want to be about Charlie-5 platoon, the whole thing feels a bit like filler. The stakes are pretty low, just the lives of the Jump Troopers, and you don't really think the named ones are in much danger. At least, I didn't. Obviously I was wrong, as Butler does get injured, though oddly off-camera. We hear a scream but don't really see what happened. 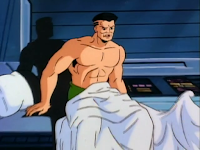 The Marsh flashback to The Perfect Warrior is especially egregious. It's long, it has no particular payoff, and it ends with him waking up in bed, a shot stolen from Ultimatum. Not only is the reuse of this shot odd, but it messes with your timeframe. When exactly was the briefing he was giving? Poor marks, Exo-Squad.

Marsala's flashback is less pointless but has an awkwardness all it's own. I won't ding them too much for him shifting back and forth from wearing a Neo Sapien uniform to his Exo-Fleet uniform. But when exactly is this supposed to have happened? Phaeton is wearing his modern clothes, and he's flying in a modern Exo-Wing. If this is the first rebellion, the details are all wrong. But it's awfully specific to have taken place during season 1, which has a rather tight timeline. Moreover, it serves no discernable purpose that I can see.

Wolf borrowing the Admiral's shuttle telegraphed the rescue too much, and had an awkward feel to it. You'd really think Winfield would have bigger fish to fry.

Watch For: Galba is bound with some kind of energy cuffs. I thought this was slightly odd, as this show doesn't normally go in for that kind of tech. 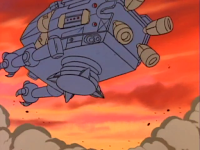 I like the reappearance of the S1-style shuttle. Sadly, it will change into a regular shuttle next episode.

Butler, in pain as the shuttle speeds off, tells O'Reilly "It's your platoon now, " which doesn't augur well for him and his injuries. Don't these troopers just look like they've had the snot kicked outta them? 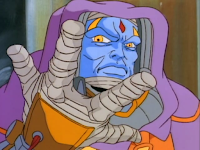 Bio: Typhonus. Our last new flashback. It would have been perfect just two episodes back. Here, it's a little awkward, as neither Phaeton nor Typhonus is in the episode. On the other hand, it's new information, and Phaeton contemplating how Typhonus is his right hand, and lamenting that he can't grow a new one, is a pretty nice beat. This episode also reminds us that Phaeton can grow new generals made-to-order, which will become important next episode.

Overall: Sadly not one of the better offerings. As I noted above, there are many strong elements, but they don't build to a coherent whole the way one would hope. It's by no means bad, but mostly serves as a bridge between the prior episode and the next. I suspect you could cut it out and not miss too much of a step. I get what they're going for; this four-part series examines the war from the perspectives of the Resistance, the Jump Troopers, Able Squad, and finally Phaeton's inner sanctum. I just think this episode didn't have quite enough story, and the reused footage does little to dispel that notion.
Posted by Jimtron at 12:10 PM

Maggie wasn't wearing a space helmet during her last words with DeLeon in One Small Step, but it appears in the flashback of this episode.

Marsala's memory involved an Exofighter with THREE Neos jumping out of it, like one of those clown cars.

At the beginning of Exosquad episode Fall of the Neosapien Empire Part 3 , the original destroyed Resolute is seen in perfect condition near the Resolute II. Was that magic from Samantha Stephens’ because today I had a vision of her in the main control room of the Pirate Clans’ Flagship?