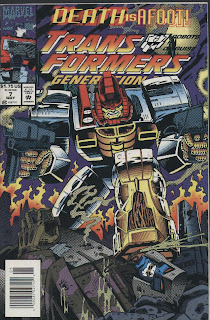 The seventh issue of the US G2 Marvel Comics run of Transformers once again contains two stories; New Dawn and Tales of Earth (part 4).  Both were written by Simon Furman, colored by Sarah Mossoff, and lettered by Richard Starkings with O'Neil.  Manny Galan penciled New Dawn, which was inked by Jim Amash.  Derek Yaniger was the artist on Tales of Earth, as well as the cover.

The cover is mostly fantastic.  Jhiaxus stands with his foot planted squarely on Megatron's neck, guns blazing.  It's another fantastic Yaniger cover, and in fact if I could have any one piece of his original artwork this would be the one.  (Sadly, this one is not in my collection.)  The only thing that mars it slightly is the pun on the cover, "Death is Afoot!"  Ugh.  It's like adding a big dollop of ketchup to a perfectly cooked steak.

The story starts off with a bang, as Megatron's new generation of Decepticons assault Tykos for its precious, precious rheanium, a gas that renders metal ultra-dense.  Are these new warriors the new dawn heralded by the title?  We get four pages of toy ads here, which really isn't so bad for the seventh issue of this series.  A particularly nice ad is Darkwing, based on the Dreadwing toy.  Didn't Galan do an outstanding job with this pin-up?  Sadly, I don't think we'll see this design again anywhere in G2.

It's not all toys, though.  We get to see Megatron be hard when a mechanoid attempts to surrender to him and is promptly blown away for his troubles.   We also get a bit of characterization, when Starscream reacts to a menial assignment with paranoid.  Then again, is it paranoia if Megatron really is planning to off him at some point?  In any event, all this carnage is merely a prelude.  A Deceptiocn shuttle sent to investigate the K'Tor Cluster and Jhiaxus' forces returns, but so badly damaged that it burns up on reentry.  Thus challenged, Megatron has little choice but to respond in kind, and rallies the troops for some blood - er - oilshed.  The story is slick, mixing in action and character development and some new toys and some plot advancement.  The set-up of the previous six issues is starting to pay off. 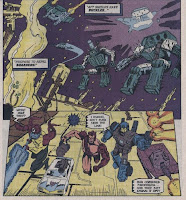 As the Warworld engages the Twilight, we swiftly learn how outmatched our 'heroes' are as the G2 Decepticons seemingly effortlessly dispatch Megatron's motley crew.  I like how diverse the original Decepticons are in comparison to the forces of Jhiaxus.  You've got werewolves and octopus-men and purple tanks and white cars on the one side, versus beings with a much more uniform look and feel to them, spikey and white / green cybertronian forms.

Despite Starscream urging retreat  Megatron refuses.  He only has eyes for one being, the enemy commander.  We get a nice close-up on Jhiaxus' mouth, similar to the one of Megatron's from the last issue.  The battle will take a similar course as well.  With the same apparent ease that his troopers dispatches those of Megatrons, so does Jhiaxus thrash Megatron about even as he lectures him on his lack of a place in the cosmos.  Megatron is knocked off the ship and can only watch, helplessly, as Jhiaxus transforms and blasts him down onto a planet below.  The narration is nicely poetic: "In seconds he is a fading speck in the upper atmosphere, passing the terminator... night becomes day."  It seems that the new dawn is not Megatron's bolstered army, but rather a reference to this battle, and it belongs to the Cybertronian Empire.

But surely that can't be the end of Megatron.  The ever-loyal Soundwave leads a search party for his remains, which they eventually locate in a crater.  Incredibly, Megatron has survived his descent, and there is only one thing on his mind... revenge!  It's a powerful ending, and the understated surprise on Soundwave's silhouetted face is also very nicely rendered.

This, the main story of the issue, was very well done.  Megatron really does seem like some kind of dinosaur here, refusing to grasp the reality of the situation before him.  The dawn metaphor is nice, partially because it's pretty subtle.  One mention in the cover, and then a bit of payoff right at the climax of the Megatron-Jhiaxus battle.

Moving on to the backup story, Tales of Earth continues.  The story has shifted from the Decepticons to the Autobots.  Optimus Prime is being repaired after the drubbing Megatron handed him.  His metaphysical musings about what the loss of the Matrix means to him are well done.  What really does it for me, though, is three pages (including a lovely two-page vertical spread) of flashbacks to Metatron over the years.  We get reference to issues 1, 4, 8, 24, 25, 59, and 70, all fit together rather perfectly. 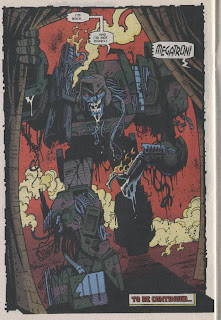 Of course, all this is going somewhere.  Megatron is here, looking like he might fall apart at any moment.  (Derek Yaniger has said that this image of Megatron was his favorite piece from this run.  I can't say I blame him, it's fantastic.)  It seems that Megatron has reconsidered Optimus' proposal for an alliance. The artwork is lovely, but there's a subtle touch that I appreciate.  When Megatron shows up, Optimus Prime's line is "at last..."  How apropo.

Once again, the Tales of Earth were short but punchy.  We're starting to build to the idea that the war without end between Optimus and Megatron is a not just a political tragedy but also a personal one.  It's a great idea, one that is surprisingly intuitive.  These sorts of themes wouldn't really be explored again until Alex Irvine's Transformers: Exodus.

Taken as a whole, we're again given a tale where the primary and secondary stories play off of each other, and both are stronger for it.  In fact, this is probably the first time in the G2 run where the result is actually better with a one-two punch than it would be as an integrated story.  Each story climaxes in a very satisfying way.  G2 #7 kicks off the moderately out-of-print titan collection,   Transformers Rage in Heaven, available at Amazon used.  It's quite good, so check it out if you haven't done so.
Posted by Jimtron at 12:19 PM

One of my favourite issues from one of my most favourite series. I would describe Jhiaxus' guns as "smoking", rather than "blazing", though ;)

Manny Galan seems to be getting into the groove here, but Derek's art was still my favourite. I wonder what the pages would have looked like if Galan would have been allowed to draw in his own style.

Like another poster said though, these comics do show he actually cared about the premise, as he obviously researched which robots he was to show in the comic. All the appearances of all the vast amount of Transformers that were around in G1 and G2 were acurate to their cartoon models.

another issue I couldn't find in newsagents at the time. I'm kind of kicking myself I didn't managed to find this in back issue boxes, but as was mentioned after an earlier review, retailers were under ordering due to a general drop in interest for TF's (or anything comic related).

Story wise this was the point they seem to have shifted away from G1 and set a course from which anything you still clung to about the old continuity was forgotten. I know previous issues tried to alter the tone, but characters like Bludgeon and Fortress Maximus, still maintained strong links to Furman's swansong, now all but a childhood memory.

As a teenager I found the art work ugly, and as an adult I've not grown any more fond, but I can, now, at least appreciate the tone fit the direction of the story at least.