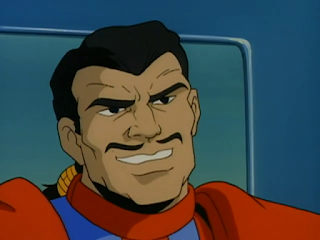 "We Pirates hold the balance of power. Without us, Exo-Fleet cannot win. With us, the Neo Sapiens will surely win. Simbacca traded away our help for a miserable existence on the desert of Mars. Phaeton has promised us Venus!"

Fire Ship is the thirty-fifth episode of Exo-Squad. When Exo-Fleet intelligence uncovers evidence of a massive complex on Mars, two ships are dispatched to investigate. Unfortunately, Barca is the captain of one of them, and the operation becomes a massive ambush. Pressing their advantage, the Neos give Barca a monitor-class ship that he ostensibly captured, with an eye towards using it to destroy the Resolute II and destroying the remnants of the Exo-Fleet. Able Squad is captured, but Hollis manages to spring Nara (after capturing her in the first place) and thwart Barca's plans. He blows up with the monitor, though Hollis suffers serious injuries in the process. 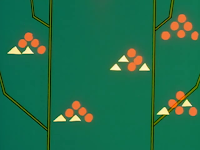 What Works: The ambush is suitably brutal. The Neos know the Fleet is coming and take full advantage of that fact. I rather like Commander DeSoto and the Pirate captain watching their guys go up in smoke. (But see below.)

This is the last major Pirate-focused episode. We haven't had one for a while, and this feels like a decent time to have one. Barca's absolutely right in his analysis about how important the Pirates are, they're the key to the whole war. 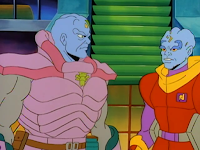 Typhonus is back, for the first time since we saw him cloned. He is recognizably the same, yet slightly more subdued. Or maybe I'm reading into it. He certainly has no objection to working with his Neo Mega, Ixion. (Not named this episode I don't think.) They have some great exchanges, notably Ixion advising Typhonus against giving Barca Venus, and Typhonus' casual reply, "the only part of Venus that Barca will ever see is a six foot hole in the ground." 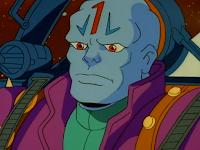 Marsala gets several chances to shine this episode. His regret at once again leaving Mars, his home, is understated but palpable. I rather enjoy both his attempt to break out of the Monitor-class ship's brig, and then comfort J.T. when such an attempt proves futile. And man, he sure does go down hard when the Pirate ambush comes. 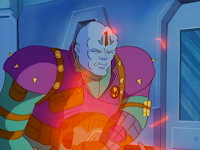 The Pirate ambush was also nicely done, with the squad taken down in four pieces. J.T. gets captured on the bridge, Weston in the infirmary, Takagi and Bronski on their way to the mess, and the rest of the squad relaxing in a common area. 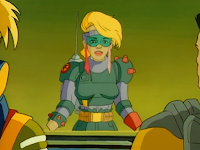 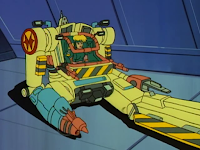 Weston's injury was nice, and lent a bit of extra consequence to the ambush, AND set up her e-frame to be damaged and therefor available for use by Nara at the climax of the episode. Slick writing. (though, see below.)

What Doesn't: Big picture-wise, the baddies make a lot of mistakes in order for the plot to work, which feels like a cheat to me. The big three variously, are: 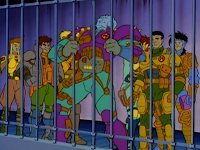 1--Why was Able Squad kept alive, only to be put in an elaborate death trap? If Barca was prepared to kill them, just shoot to kill and be done with it. Hell, if they were shooting to kill, rather than stun, then they'd probably have gotten Nara. Marsala basically shielded her with his body and took 10-12 shots. 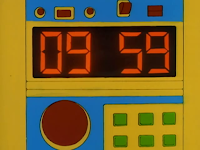 2--Why use a timer at all on your bomb? Far better, surely, for one that's remote trigger-able. How could the be sure when the Resolute II would be in range? Also, Barca wouldn't have needed to trigger it at all, and thus saved his life. Saved it for a summary execution, no doubt, but saved it none-the-less. 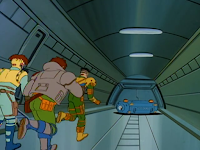 3--Why have life pods on the ship that you've packed with explosives? I'd have pulled out every air filter and working piece of electronics, let alone auxiliary vessels. 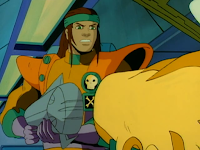 Hollis' betrayal of Nara, followed by him helping her out, is overly complicated and doesn't seem to be motivated by anything in-story. Rather, it's a way to fake-out the audience, and not a very effective one. It never feels like his heart is really in it, which I suppose it isn't. 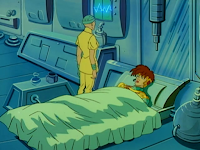 Remember how I liked Weston's injuries? Well, there's an Exo-Fleet medic on board, who never shows up again. What, did they just off her? And if so, why not do that to the rest of the squad? Come to think of it, while casualties were heavy, they weren't close to 100%. There should be a bunch more troopers running around. 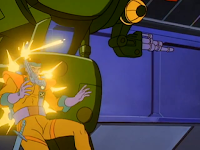 I'm having a hard time buying Hollis' injuries being quite so life-threatening as the episode makes them out to be. Sure, he gets shot, but so did everyone else in the squad. Hell, Bronski took one to the gut back in S1. There's no clear reason why this shot to him is quite so bad. At least when Simbacca's life was threatened back in Inner Dark (by Hollis, as it were) that was an e-frame blast. This is a hand weapon. 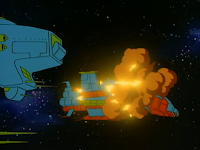 I'm also a bit skeptical that Barca would blow up a Pirate vessel. While he's motivated by personal ambition and greed, he does seem to have a legitimate love of his people. Had it been an Exo-Fleet vessel, I'd have no such compunctions. 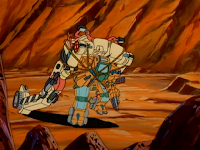 Minor gripe, but Torres' mech hauling Weston's into orbit seems unlikely. Bigger gripe, why did Marsh take his squad down in the first place? It was against orders, he got one of his people grounded, and they didn't recover any useful intelligence. All in all it was an odd beat, and felt particularly out of character for Marsh. Not that he'd never disobey orders, clearly he has. But it's always been for a good reason, and there didn't seem to be much he'd be likely to accomplish this go. 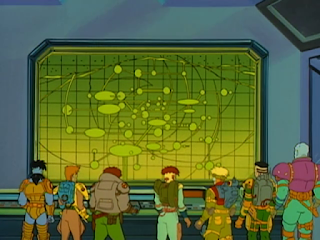 Watch For: That ginormous compound they found? We'll see a lot more of it, and soon. And yes, it really is that impressive. 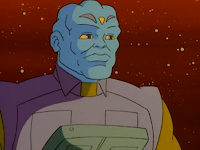 We'll also learn more about the Neo we see at the beginning of the episode next time. I rather like that his involvement wasn't included in the intelligence briefing. Need to Know and all that, which as it turns out, kept their asset safe from Barca's machinations. 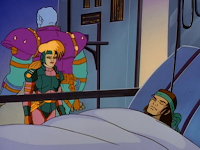 Hollis will be back, and my grumblings above aside, he will have real consequences from his injuries.

Overall: There are a lot of little things that don't quite work about this episode. Nevertheless, it's a solid addition to the story... provided you don't spend TOO much time analyzing it.
Posted by Jimtron at 9:24 PM