War of the Worlds: The Series -- TV Zone Magazine Article 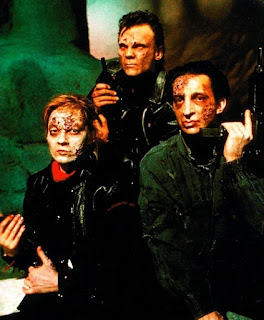 It's been a good, long while since I've done a War of the Worlds: The Series post. And that's probably understandable, after all, it's not like they're making new ones, amirite? But thanks to our newest commentor, Scott Larson, I'm happy to share with you two TV Zone articles covering the production of the series. The Season One article is decent, to be sure, but it's the Season Two article that really wows. It touches on some new potential reasons for the cast changes (there needed to be a Canadian main character to keep their funding) and mentions that Mancuso tried to bring John Colicos' Quinn back as a main character for S2. Huh, who knew? So, if you enjoyed the series, head on over and take a gander. It's an interesting tale of the behind-the-scenes production of both seasons of the show.