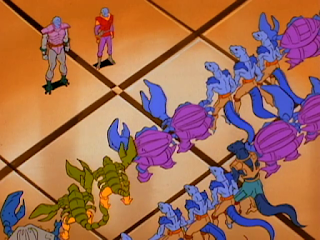 "Neo Sapien Warriors... Freaks! Beasts! They are an affront to the genetic superiority of the Neo Sapien Race."

The Lost Patrol is the thirty-seventh episode of Exo-Squad, and continues the Return to Mars storyline. This episode's plot is almost entirely given over to Torres' encounter with the Exo-Scouts, and the Lord of the Flies-esque society the six boys have become. She assumes command, via combat, and starts to lead the troop to Olympus Mons to rendezvous with her squad, but gets ambushed by a group of Neo Lizards along the way. She saves them all, even the boys who tried to murder her. Meanwhile, while searching for the presumed Neo underground base, Bronski stumbles upon... something! Something potentially not built by any branch of humanity.

This episode introduces five new characters quickly, along with their gear, and does a halfway decent job of making you care about them. (But, see below.) The kids are: 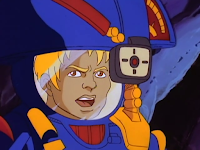 Pirate--the villain of the piece. He's got a longstanding rivalry with Red, and is constantly attempting to exert control. He obviously gets his name from his e-frame, with its prominent sensor display approximating an eyepatch and a hook hand. He's the one who knocks Torres into a ravine when the opportunity presents itself. 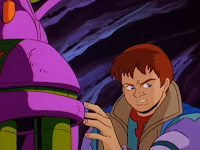 Cruiser--a bully, he tries to grab Rabbit's frame after Torres commandeer's him. He's slightly chubby, not in any way that matters but enough that the others rib him for it. He teams up with Pirate to remove Torres, but one gets the sense that he's just eager to assert himself, especially after she steps in between him and Rabbit. 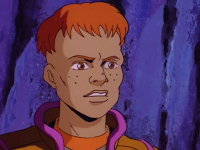 Red--Pirate's main rival. He's a ginger, but he also has a red e-frame, so the name works on multiple levels. He seems like an overall decent kid, grasps right away the advantage that having Torres represents. 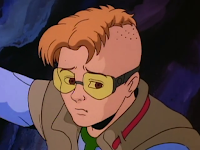 Doc, named because he's got a merit badge in first aid. He's definitely a follower, not a leader. As the first character Torres interacts with, he fills her in on the exposition and in some ways is the everyman of the group. 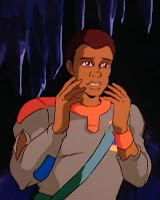 Rabbit, whose moniker clearly come from being the most nervous of the bunch. He's a natural target for Cruiser. I would have liked to see exactly what it is he's good at, since having him exist just to get picked on seems lazy. Then again, there's only 22 minutes to tell this whole story, so I suppose him winding up a cipher is somewhat inevitable. 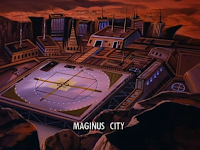 I like getting another look--a last look, I do believe--at Maginus City. It still looks awfully small to be the capital of Mars, but I do like to see it explored, however briefly. 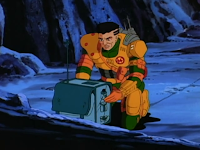 Marsh's report back to Exo-Fleet is a decent way to deliver the exposition of where they are and why. We also learn the name of the four member of Kosari's squad who dies; Davis, Grogan, Blake, Mendel. At first I was going to chalk this up to an error, since we only saw 3 e-frames explode, but then I remembered one was a two-seater.

What Doesn't: I don't think the premise here works wonderfully. It's hard to buy these kids surviving on their own for two-plus years on Mars. OK, sure, they're near an open body of water, which probably means they have enough to drink and perhaps even eat. But this is a planet of five million Neo Sapiens. 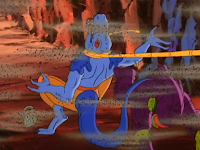 The Neo Warriors, who took point-blank hits just a few episodes ago and never slowed down, get easily dispatched by Torres in a toy e-frame. She garrotes them, knocks them off the cliff face, and collapses rocks on them. Now, I actually think that this is a pretty appropriate power level for them... but it is absolutely not what was established in the Australia plotline. 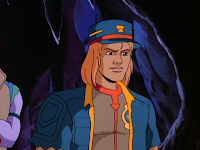 I mentioned six Exo-Scouts, but only went through five. That's because there's this guy. He never gets a name that I caught, nor is there one listed on any of the online resources I can find. He doesn't have any lines that I can tell. Maybe there's a name written on his frame, but I don't feel like going through and freeze-framing.  He does seem eager to watch Torres fight Pirate for leadership of the group, but I'll try not to read into that too much. He is, after all, about thirteen and at least partially feral. The episode is already crowded, having a single red-shirt is pointless. Why not just have five Exo-Scouts and be done with it?

Watch For: One of the lizards talks, albeit in broken English. That's because he's second brood. The idea that the Warriors are a work in progress will continue to get explored.

Typhonus calls the Exo-Scouts "half-formed Terrans." He won't be the last. 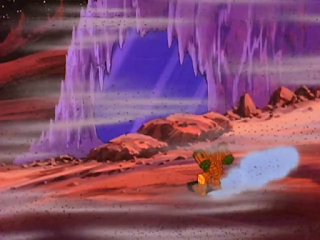 I shouldn't have to say that the underground compound Bronski finds at the end of the episode will get a thorough exploration in the very near future, do I?

Bio: Marsalla, and with no new footage. This would have been the perfect time for a Torres bio. Ah, well.

Overall: I never completely bought into the idea of the episode. The execution is about as good as can be expected, but overall it adds little to the mythos that I can see. You could cut this one, except for a few seconds, and never miss a beat. That it's in the middle of a really jam-packed storyline only underscores how out of place it feels. Not their best effort.
Posted by Jimtron at 4:08 PM

Notice that Rita's original e-frame, which was blown to little bits in 'Martian Luck', looks surprisingly intact in this episode? Perhaps the production team didn't have a continuity editor.