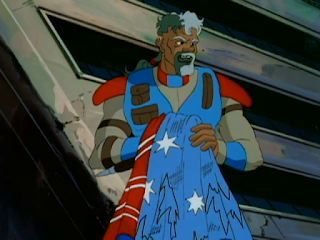 No Surrender is the thirty-forth episode of Exo-Squad, concluding the Neo Warrior Australia plotline. Shiva has the resistance and Able Squad boxed in, but unexpectedly gets his hands tied by Phaeton demanding Marsh be captured alive. This forces a frontal assault (as opposed to artillery bombardment) and gives the forces of light just enough time to scrounge up a counter-attack from space. Charlie-Five platoon manages to nab Shiva by outflanking his forces and he reluctantly agrees to call off the attack, enabling the resistance to retreat to the mountains. 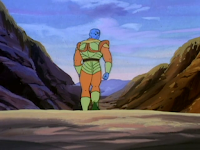 What Works: Shiva. Oddly, he's the stand-out character of this episode. He's always been portrayed as mostly fairly brutal, but this episode brings out a new side of him, that of the reluctant leader. "I am a soldier. Right or wrong, Phaeton is my commander." He also seems to genuinely care for his troops, expressing dismay at Phaeton's illogical orders that many lives be sacrificed to ensure the capture of Marsh. 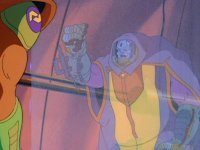 Phaeton. Though he's only in the episode a bit, he remains a powerful presence. He confirms what we must all have suspected, he is suffering from Auto Mutation Syndrom as a result of his battle with Marsh. He also has a great exchange with Livia, where he tells her she's a lousy general. 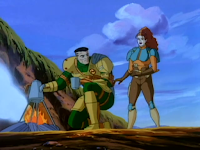 The Marsh / O'Reilly relationship gets another light nudge, which is nice to see.

Per the opening image and quote, the flag imagery continues to be utilized effectively. The flag, getting progressively more tattered last episode and this one, is finally torn off its pole by a Neo Bat, only to be retrieved by Tyree as the resistance flees. Very effectively done. 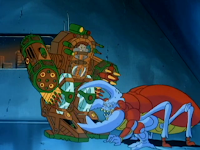 We get to see another new Neo Warrior bodytype. This time, it's a Neo Beetle. They burrow, which could of course be incredibly useful in a fight. 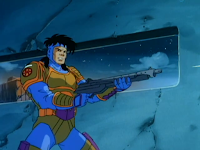 Takagi, who lost his Exo-Wing last episode, here shows off his infantry chops, fighting alongside the resistance as they make their desperate last stand. 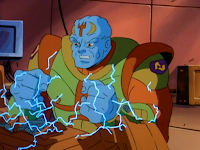 After last week's "like MacArthur" (repeated here), the WWII reference of this episode is "Nuts," Tyree's answer to Shiva's surrender demand. This, of course, echoes General McAuliffe's answer to a similar ultimatum from a German General. 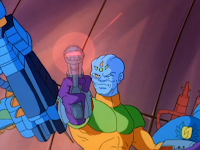 Neo Megas are back. Since Draconis had his executed, we haven't seen them around. Shiva has one, unnamed unless it slipped by me, and he's about as likeable as all of the rest of his brood. Shiva, at least, has made his peace with their presence. It was neat to see him with a similar weapon to the one Barca used back in Expendable, 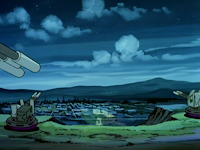 What Doesn't: Marsala and Napier seem to spend forever just meandering about the Neo camp before remembering that they can fly. Now, MAYBE they're doing recon, which makes a little sense, but given Marsala's stance on capturing Shiva (too risky, don't want to put Napier at risk) one wonders why. And even when attacked, they STILL don't fly away. All in all, the first four minutes of the episode are them tromping around in an invisible e-frame. Very awkward.

The way the story reads, Shiva calls off the attack to save his own life. Given the direction the character seems to be going and the high regard he has for the welfare of his troops, it's odd they didn't use this angle to convince him to break off the attack.

Alec and Maggie getting all the way back to her e-frame and then having it be operable seems like a stretch. As far as we know, the Aboriginals don't have any means of transportation besides walking, so the timeline doesn't really work. On the other hand, Alex looks AMAZING flying into battle clutching the e-frame and then blazing away, so points for that.

Watch For: Phaeton's obsession with Marsh is introduced here. As recently as Under the Skin, Winfield was correctly identified as the primary threat to Phaeton's dominion. As his disease worsens, though, he's starting to zero in on Marsh. 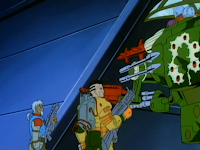 There are a number of animation flubs this episode. Last episode, Marsh and Tyree were in frames when they saw Napier off. This time, just hand weapons. The Neo Mega's Command E-Frame changes from Phaeton black to standard blue. Oh, and he occasionally has 4 fingers, though usually they get it right and give him 3.

Shiva's arc has more to go, and we'll be seeing more of Marsh / O'Reilly.

Bio: Nara Burns, again, though she's a bit player. No new animation to sweeten the pot either.

Overall: A satisfying conclusion to a slightly odd arc. Neo Warriors are definitely creepy, and as portrayed here are potent weapons of war. They have slightly toned down the overpowered aspect here, which is good. It's also nice to see unrest among the Neo Sapien leadership. Losing Venus had to have taken a toll, and having your brilliant and handsome and charismatic leader turn into a shambling wreck can't be easy either.
Posted by Jimtron at 8:56 AM