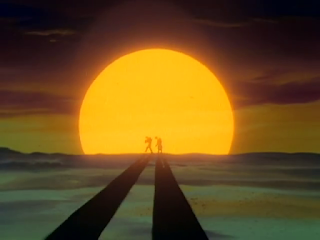 "Once, I was commanding general of all Earth forces. Now I am a zookeeper."

The Dream War is the thirty-third episode of Exo-Squad, the mid-point of the Neo Warrior storyline. Picking up right where we left off, Tyree's forces along with Marsh, Marsala, and Napier are holed up in Parliament House in Canberra. They make a break for it, but are quickly forced back inside after taking heavy losses. Even the arrival of most of Able Squad isn't enough to turn the tide. Meanwhile, DeLeon and Weston are a hundred kliks away trying to get his bird in the air when they are beset by Neo Lizards. They total Weston's frame and they retreat on DeLeon's, only to have it sputter out after cresting some mountains. Fearing, correctly, that they might be pursued, they take his fusion pack and continue on foot, linking up with an aboriginal tribe. After experiencing prophetic dreams, they wake to discover the tribe is under attack, and with their fusion pack manage to finally defeat the lizards. Meanwhile, resigned to their fate, Marsala suggests attempting to at least save Napier using his e-frame's stealth abilities. The attempt begins as the episode ends.

What Works: Despite an odd episode structure (basically Canberra material bookending Maggie and Alec trekking through the Australian outback) this episode manages to basically hold together. The Australian mysticism manages to engage without being too corny. The use of cave paintings of Neo Sapiens, as well as Neo Lizards pursuing two troopers, is slightly hokey but also kinda cool. And I love Maggie's dream... 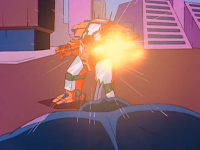 The Neo Warriors are freaking terrifying. We meet a new one, the Neo Rhino. I absolutely love the POV shot of one charging Torres. Even our unflappable sergeant gets, well, flapped (then flipped onto her back) by one of them. We also get another dose of Neo Crabs emerging from the water for just long enough to drag under hapless resistance fighters. The writers certainly have a strong understanding of how to touch upon visceral fears. (But, see below) 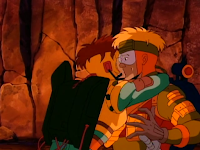 Weston and DeLeon kiss, paying off some of the gentle flirting we've seen between them. Their relationship will continue to play a role over the course of the series. It's subtle, we're hardly in the melodramatic territory of a Robotech here, but probably more realistic in many ways.

It's a subtle thing, but we see, twice, that Alec's e-frame has a busted Cyberlink, with him needing to manually connect and disconnect. I love that level of attention to detail. 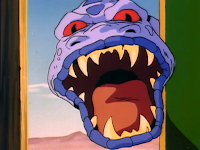 The relentless nature of the Neo Lizards, "they weren't bred to give up," comes across rather well. The scenes of them, hours later, retracing Maggie and Alec's steps is well done. 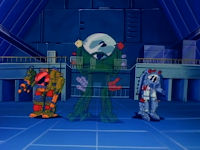 And, in the Canberra plotline, I like Marsh quipping that Napier will return "like MacArthur." This is, of course, a reference to General MacArthur's escape from, and subsequent liberation of, the Philippians from the Japanese occupying forces. It's also rather nice that Tyree has come around so completely. No one is quite as fanatical as a convert.

What Doesn't: The Neo Warriors still feel overpowered, especially the acid. Twice, we see Neo Lizards spray acid and hit a machine somewhere on the periphery, only for the machine to subsequently smoke and spark and sputter out. They also still seem to be more-or-less immune to blaster fire, which I still have a really hard time buying. 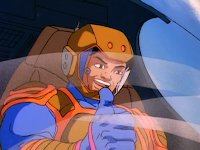 Nitpick... why is Takagi wearing his helmet? They never wear helmets? Not a huge deal, but definitely a visual inconsistency, and there's no plot reason for it.

Watch For:  During Weston's prophetic dream, she experiences an explosion, "bigger than anything before." It's just a few frames of animation, but she's dreaming of a map of the solar system, and the explosion originates at Mars. This is some key foreshadowing right here. They pass it off as presaging the fusion pack explosion in the caves, but it'll be much, much, MUCH bigger. 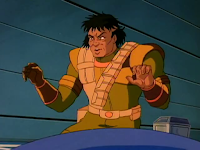 Shiva's dissatisfaction will play into the next episode as well. 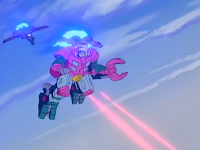 Bio: It's Marsh this time, with some new animation. Nothing too special, but there's a blink-and-you'll-miss-it shot of Nara in a new e-frame. Slight spoiler I suppose, though not nearly as bad as Simbacca and the Resolute II. 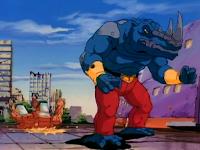 Overall: A step up from last time. Putting the main plot on hold for most of the episode to follow Weston and DeLeon is a risky choice, but it pays off. Their plot didn't need a full episode, but did need the 15 or so minutes it got. Meanwhile, the tension in Parliament House keeps getting raised. The episode starts with the resistance and a couple of troopers trapped, and it ends the same way, only with half the resistance dead and most of Able Squad stuck, many without their birds. Looking forward to the resolution.
Posted by Jimtron at 1:48 PM