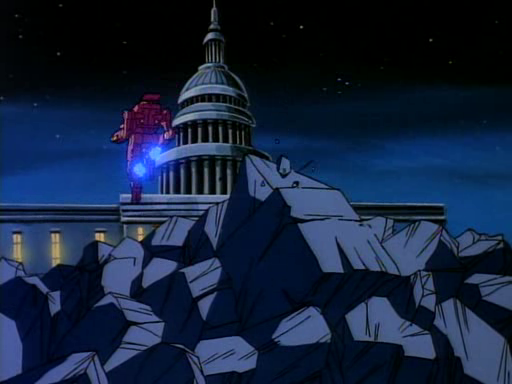 "We're beaten. And where's the Exo-Fleet? Off chasing pirates while the Homeworlds crumbled."

We're up to episode 4 of Exo-Squad, Blitzkrieg, and finally (just about) everything works. The A plot is the conquest of Earth, accomplished through complete air superiority on the part of the Neo Sapiens. Organized opposition crumbles in mere days, and the population is brutally and efficiently enslaved. Sean Napier, a microcosm of humanity, has his hovercar shot down, attempts to flee Chicago on foot, is captured, works in a slave labor camp, escapes, hooks up with some fellow survivors, and begins the first stirrings of the Earth resistance.

The B plot features our heroes attempting to return to Earth from Saturn. They've been traveling for two days and still haven't heard anything more from the Homeworlds. Tensions are high; Marcus snaps at several crewmen and Nara hurls a fusion pack against a wall. When Maggie Weston manages to reestablish contact, their worst fears are concerned. Marcus orders the fastest ships in the fleet, the six Exo-Carriers, to full speed, to stop the massacre of humanity. Marsh attempts to belay that order, arguing that going up against a superior force with only half the fleet was suicide, only to find himself arrest for mutiny. He and Marsala attempt to use his trial to convince Marcus or some of the other high-ranking officers to contravene this disastrous strategy. It fails, and Marsh is sentenced to die. While being lead to his execution, the Exo-Carriers fall under Neo Sapien assault. To be continued!


What works: Irony! Phaeton gives another great speech, waxing poetic about the wonderous empire he is founding. Juxtaposed are images of slaughter and refugees and flames. Really very well done.  "The reign of the old humanity ends this day. We, the stepchildren of mankind, are now its rulers. Think, typhonus, what the rule of Neo sapiens means. Justice at last. Logic at last. Order at last. Our laws will prevail. What glories the homeworlds will see governed by our even hand. " 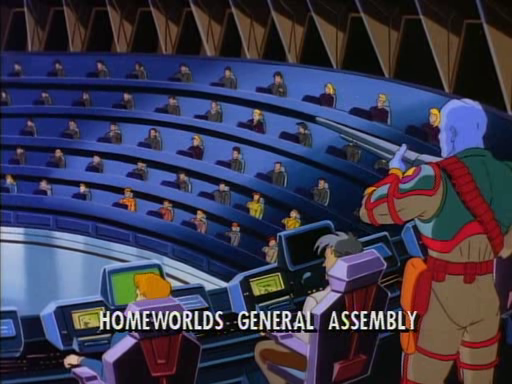 The politicians. Phaeton is in this for history and seeks to legitimize his conquest. Hence, we get treated to a scene of the Homeworlds General Assembly surrendering to his rule. Lest there be any mistake about who's in charge, armed troops survey the representatives at gunpoint.

The tension. I love how those in the Exo-Fleet, still days away from being able to help their loved ones, are all at each other's throats. One might think that folks would all be pulling together, pitching in, but one would be wrong. 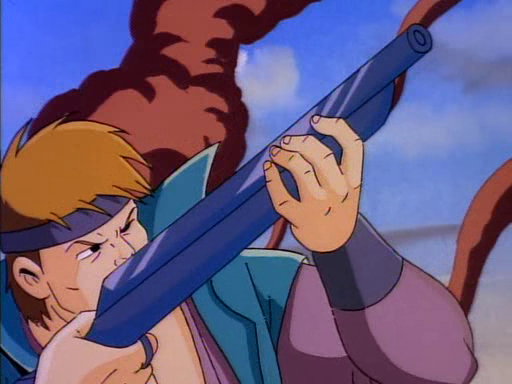 Earth resistance. This is sort of the pre-resistance that we'll meet in the coming episodes, but despite the Neo Sapiens being able to effectively obliterate any target from orbit, individuals continue to fight back. We see aircraft go up against vastly superior e-frames and lone folks with rifles shoot futile at Neo Sapien y-wings. We also hear tons of explosions, the background a cacophony of violence.

Winfield. The audience is reminded a few times that Marcus is only in charge because Winfield is in sickbay. I also like the Neo Sapien nurse, the other Neo Sapien we see in Exo Fleet besides Marsala. She's never very important but I'm glad she's there.

Body language. This show continues to examine the human reaction. Observe the slumped shoulders of the Chairman of the General Assembly as he surrenders, the sweat on Marcus' brow, or how Marcus gets literally red-in-the-face when Marsh challenges his authority.

Mutiny! It doesn't feel like that's what Marsh is doing, but technically of course Marcus is right. Marsh made a critical blunder by contravening Marcus' order in public, making it difficult for him to back down even if he wanted to. A private conversation might have gone oh so much better. But then Marsh is under as much stress as anyone. I like that the tribunal, presumably other ship captains, found Marsh guilty as well. That feels like a more real choice then having Marcus' orders overturned. 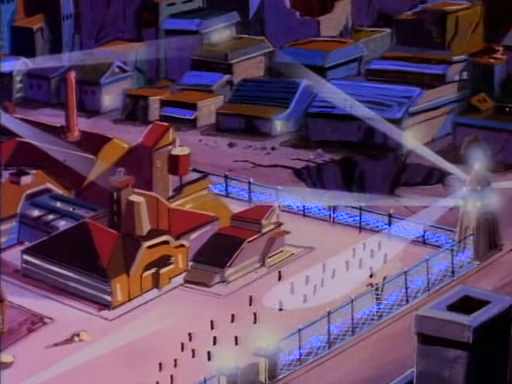 Imagery. This is dark material, and the producers don't shy away from mining the material for drama. "...we have a permanent solution to the human problem," barks one prison guard. We see work camps with electrified fences and guard towers, monuments crumbling, refugees trudging out of town with babies in tow. Bold stuff for a Saturday-morning cartoon.

What doesn't: Very little doesn't work. Marcus is acting within the established parameters of his character, and frankly getting some force back to Earth as quickly as possible is an entirely understandable decision. The intelligence they have was sketchy at best, and the Exo-Fleet and its carriers had been the dominant military force in the solar system for generations. I can see being skeptical that a space fleet constructed in secret would be able to stand up to it.

There are a few animation errors. Typhonus is shown attacking the Capitol building in D.C. while he's in the middle of a conversation with Phaeton. Later, Draconis and Phaeton enter the Homeworlds Assembly only to have Typhonus and Phaeton deliver an ultimatum, the switch back to Draconis. Nothing that can't be forgiven.

Watch for: Phaeton muses that "the birth of the Neo Sapien age is a thing of beauty. It would be unthinkable not to witness the most important event in history! The moment Neo Sapiens sieze their destiny." This won't be the first time he uses this phrase.

We'll also see some of the politicians again in early season 2. 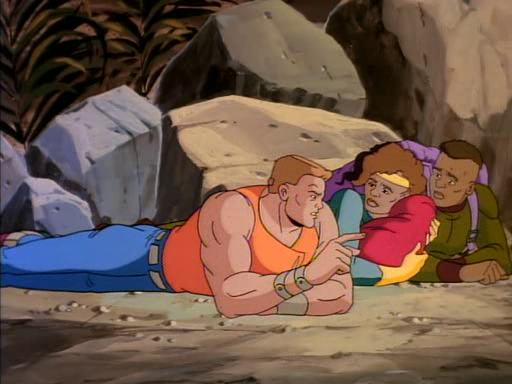 Overall: This is about as good as American animation gets. Dark, really dark, but with wonderful language and fantastic imagery. The allusions to the Nazis are subtle enough to slip by but obvious enough if one is paying attention. You also get the sense that Phaeton genuinely believes what he's selling, which is nice in your genocidal bad guys. The episode has an odd structure and pace to it, but cutting between the distant fleet and the poor saps of Earth gives it a great tension, even if the action is lopsided and comes in odd spurts.