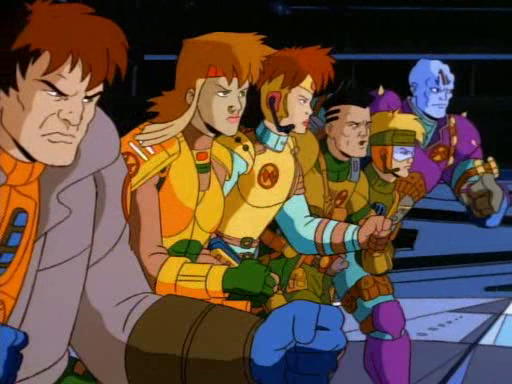 It's been a few years since I've done a regular review feature, and I've been itching to get back into the swing of things. A series of fortuitous events has occured that made Exo-Squad a natural candidate. First off, I read the James S.A. Corey book Leviathan Wakes, an excellent space opera that takes place entirely inside the solar system. I love the space opera genre, but it's rare that you get a good one that makes the solar system feel so large and interesting. This aspect in particular reminded me of Exo-Squad. I also have finally found a decent copy of the second season. Prior to this, I've been running off digitized versions of old VHS copies I taped during my freshman year of college.

(Flashback to 1994: me, laboriously carrying my VCR from my dorm room to the common area, because that was the only cable jack on our floor. Hooking up the machine to the wall, and then to the TV, plopping in a tape and hitting record and editing out commercials on the fly. At 6:00 AM. Every weekday morning for the better part of two semesters. Impressively, I missed only one episode of the entire second season the first time it aired, though the one I missed was a critical one.)

For those of you who don't know, Exo-Squad represented an attempt by Universal Cartoon Studio to break into animation syndication in the early 90s. It's one of the last of the Sunbow-style American/Japanese hybrid styles of attempting to have it all, tons of motion and tons of detail. Consequently, it suffers from the same kind of quality control issues that similar cartoons saw. Nonetheless, it's ambitious scope made for some great mecha and spaceship designs, nuanced characters and sympathetic antagonists. Some of the "good guys" aren't all that nice, and plenty of the villains have understandable motivations. They also didn't shy away from death, giving a sense that even main characters could buy-it. For the most part they don't, but killing off some of their rich second-stringers gave that illusion. I'm a huge fan of the show, and I thought an episode-by-episode examination would let me see it in a new light. On to Episode one!


"That's just a sneak preview folks. Next time, we're coming back for real." 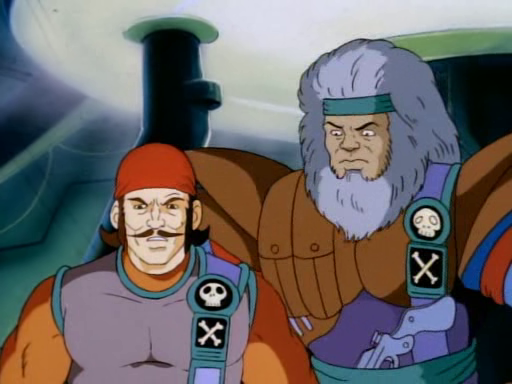 The Pirate Scourge is our first introduction to the universe of Exo-Squad, and it starts off not with a bang but a whimper. We get some brief exposition in the form of a documentary, touching on the Neo Sapien rebellion of fifty years prior, before witnessing a freighter ship on its way to the inner solar system get ambushed by pirates. Our heroes, stationed in orbit around Mars on the Exo-Carrier Resolute, are dispatched to investigate and trigger an ambush, costing a shuttle of engineers their lives. In response, the Homeworlds' Senate, instigated by the Neo Sapien delegate from Mars, Phaeton, authorizes a vast armada to hunt down the pirate scourge. We end on another pirate ambush, this time on the Exo-Fleet itself. 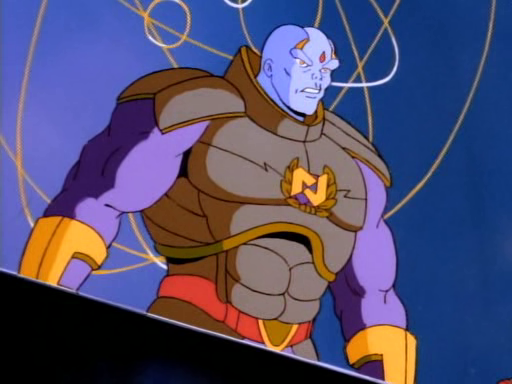 What Works: There are some very nice bits and pieces in here. Phaeton's speech to the Senate is rather nicely delivered, though probably a bit too transparently motivated by something sinister for any venue other than a kids cartoon. In this context, it works well.

Perhaps my favorite line in the episode is delivered unassumingly, Nara Burns talking about how the videogram she's sending will take over an hour to get to Venus because of the distances involved. That kind of attention to physics grounds things and feels very real and lets the audience know what the rules are without being too ham-fisted about it. 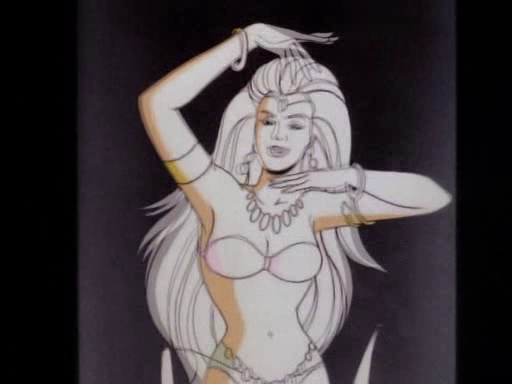 I love that the freighter crew has a hologram of a dancing, scantily-clad woman. Anime influence showing for sure. I also love that it bounces around the derelict ship as Able-squad investigates.

Overall the introduction to the various members of Able Squad is solid. Not amazing, but gets the job done. You get names, functions, a sense of personality. Obviously we get more, much more, over time, but this is foundational material and works as such.

Bronski getting an injury and trying to shrug it off was a nice character moment.

What doesn't: Sadly, the whole is less than the sum of its parts in this episode. It's hard to put my finger on why, but it's just kind of boring. There is a big space battle, but they reserve it for the last few minutes of the episode. Things that could have been played for action (mostly the pirate machinations) are instead played for tension. I think finding some way to open on a battle would have helped a lot. This isn't a persistent problem, more a symptom of deciding to open with a slow burn, but I think it could have been avoided. 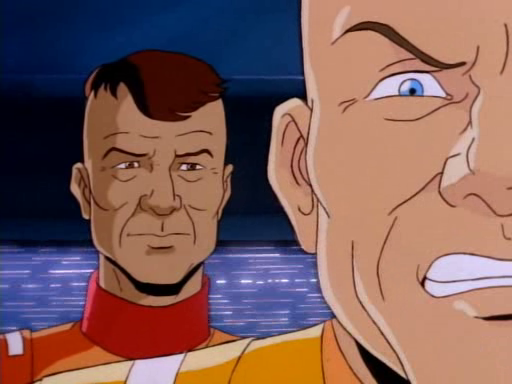 I don't like how incompetent Marcus is. Even for a force that's been at peace for a couple of generations, it seems unlikely that the flagship would go to an officer who is less than able. If there's some reason for it (politics, let's say), it'd have been nice to see it. But moreover, for a show that goes out of its way to make the villains have legitimate grievances (pirates and Neo Sapiens both), I think you could have had Marcus as a capable officer and still be a foil for JT and Winfield.

A shot of the fleet flying past the camera is used twice. Clumsy. And another shot of the fleet entering an asteroid field seems to show a density of rocks so close to the ship as to be ludicrous. I can accept a bit of poetic license, but this seems like 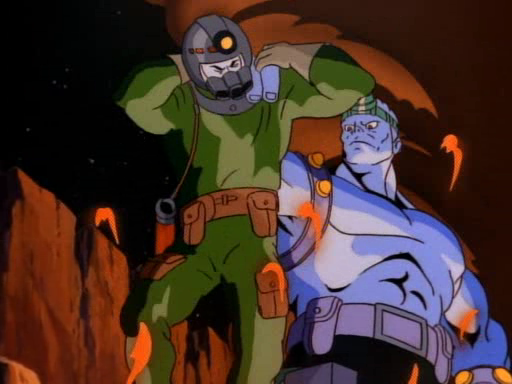 Charles McKenna isn't as interesting as the writers think he is. The opening info-dump wasn't really necessary to understand anything in the episode, and his haranguing of JT and Takagi didn't add much. Nice visuals though. Much of it winds up in the opening credits (which I'll get to after the episode review.)

Things to watch for: I love the fractional sneer Marcus gives when Winfield orders him to launch e-frames.

Nara addresses her video to mom, dad, and James. All will be important as the series progresses.

Overall: A weak start, though with some interesting elements mixed in. It only gets better from here.

Aside: I mentioned the credits. The version I'm watching this time out uses the S2 opening credits for the whole series. This isn't horrible, though it does have you wondering who Butler and O'Reilly are for a good 20 episodes. Certainly they're exciting, and probably not wasting time on exposition is the right choice.

However, the original airing did something rather clever. Given the slow burn nature of the reveal of the Neo Sapien threat, the main S1 credits didn't work for the first three episodes. They created an alternate set, just for those three. Sadly, I don't think this has shown up on any high-quality source; neither Hulu, the DVDs, VHS tapes, or even LDs used the aired credits. I've included a copy here of the S1 early opening. I apologize for the quality, I was pulling off a 20 year old VHS tape. It's nice that they don't give away the game in the opening.

Love that you're reviewing ExoSquad. I still have fond memories of the series, warts and all.

Something to point out re: the hologram dancer. The music she is dancing to is from the Captain N cartoon. Its a reworking of the Super Mario Bros underground music

Seconded! I really enjoyed the show the first time it came out, and this has inspired me to re-watch the episodes.

Looking forward to reading these reviews.

I'm glad you folks are enjoying the reviews. Please, pipe up in the comments section about your own thoughts, memories, and especially anything I say that you disagree with. We had a great dialog going by the end of my War of the Worlds series and I'd love to get something similar going here.