The Ark Addendum - Sureshot's Transform (and even more Farscape) 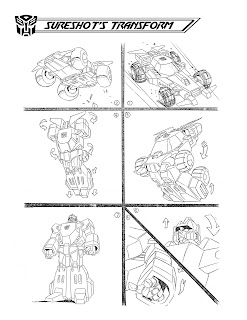 The Ark Addendum marches on!  I'm honestly not sure what I'll bring you next week, but this week I finish off the last of many partial sequences I've been through, the transformations for the Headmaster characters.

Sureshot's our boy this time.  I'd say my favorite image is probably step 1, just showing the car zooming along at high speed.  It's nice that they didn't just reuse the basic car model.  It's a bit odd that they violate the 180 degree rule from that shot to the next one, though.


Farscape Geekwatch also continues!  The wife and I are enjoying plowing through the show as a nice break from my work and her studies.  It's my second, MAYBE third time watching it, her first.  It remains mucho fun, mainly for the rich characterization though the arc episodes are quite well done.

S03E02, Suns and Lovers continues with the Zhaan dying plotline. The gang just happens to be in the wrong place at the wrong time, when some religious zealots target the station they're resupplying at.  The only genre reference of note is Scooby Doo.  John calls the gang's heroism "Scooby time" and then name-drops Scooby snacks.  Non-genre references include John calling D'Argo Heavy D, after a rapper. 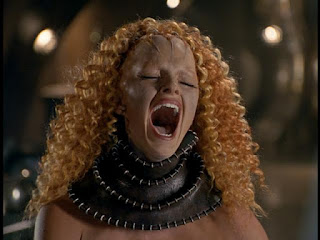 S0E03-04, Could'a, Would'a, Should'a, introduces Joolushko Tunai Fenta Hovalis (aka Jool), writes Zhaan out (Virginia Hay was having a bad time with the make-up), and gives us an inside look at Wormholes.  Many fans seem to hate Jool, and I can see why.  My first exposure to her was from mid-S3, when she was a contributing crew member, but in her first few appearances she was annoying as frell.  That was probably a bad choice, and probably why they'd write her out in early S4.

Sci-Fi and geek references include another Trek reference (John to Jool: "Welcome to the Federation Starship SS Buttcrack.) and Aeryn, of all people, asking if a broadcast clip John saw was 'Yoda of Dagobah.'  Also to Jool, he expresses some sympathy as he knows that "this trip to Krugerland was not on your itinerary," a Nightmare on Elm Street references.  Non-genre references include infamous defense attorney F. Lee Bailey ("can it, F.Lee", he quips to Rygel), Adam-12 ("One-Adam-Twelve, guys."  Adam-12 starred frequent Farscape guest star Kent McCord, aka Jack Crichton), and Hogan's Heroes (he calls one of the aliens Colonel Klink.)

is available for purchase on Amazon, and if you don't own it, buy it now now now!

Hurrah! And I look forward to you surprising me with whatever you come up with next.