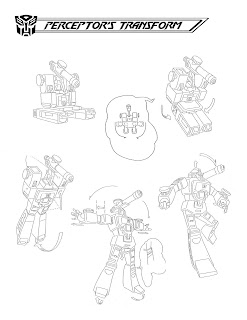 Hey, y'all!  Sorry I took a week off, moving from LA to Albuquerque is taking up much of my time.  I found the time today, though, to share a fun model sheet... Perceptor's transformation!

Oddly, I don't have too many of the American transformation sheets.  Most of what I had I shared in The Ark, albeit small.  I acquired a few more, when I got the model packs for Webworld and Madman's Paradise.  Perceptor was among these.  (As was Sludge, so expect to see him and no other Dinobot at some point.)

I like step 4... I wonder if it didn't, many years later, inspire the rather excellent Vitruvian Man Perceptor cover to All Hail Megatron 15 by all-around cool guy Casey Coller.

Can't neglect my dozens of Farscape fans either, now, can I?  Let's see, where did I leave off?  Oh, yes, early Season Three.  (I'm up to S4 now, so I've got some catching up to do.)  S03E05, Different Destinations, is Farscape's take on time travel.  True to form, the gang just makes things worse and worse, and while things don't wind up at their nadir, they leave history worse than they found it.  One geektastic reference here, when Crichton gives Stark the nickname Astroboy.  Gotta love it.  Other pop-culture references include Scarface ("Woah, Tony Montana") and The Andy Griffith Show, when he calls the peacekeeper hero "Opie."

S03E06, Eat Me, kicks off one of the best storylines in Farscape, bar none... the two Crichton arc.  On board a dying leviathan, the gang encounters a madman who can 'twin' people.  Two copies, both equal and original, though repeated twinning can result in degradation and brain damage.   The biggest geek reference in the ep is John calling the degraded, too-often twinned Peacekeepers "Night of the Living Dead."  Hammer Films is also name-checked.  Other pop-culture references include additional nods to The Wizard of Oz ("ding, dong, the pod is dead") and Kentucky Fried Chicken ("it's finger-lickin' good.")  Oh, and John mentions Abbot & Costello again.
S03E07, Thanks for Sharing, continues the ramifications of two Crichtons running around, and introduces Aeryn's mother Xhalax, as a recurring villain.  The main story, about local intrigue as the gang tries to fix Talyn, falls a bit flat though.  Geek references, there are two.  My favorite is this: "I know it's not as bad as the last time. It's not the Cro-Magnon copy or the Alien Nation reject, but you can tell I'm the original, right?"  Alien Nation, a terrific sci-fi show, was created by Rockne O'Bannon, one of Farscape's creators.  I also enjoy the continuity nod to the last time we had multiple Crichtons running about. The other geek reference was to The Dark Crystal, when John lists the Skeksis among people Crais might have pissed off.  Non geek references include Captain Crunch as a nickname for Crais, the Gotti family as a nickname for the ruling family on the planet in question, and A Few Good men ("you want the truth? you can't handle... aw, let's cut the crap."

S03E08, Green Eyed Monster, starts off the format of the season.  Half the episodes take place on Talyn, with Crichton, Aeryn, Rygel, Stark, and Crais.  Half take place on Moya, with Crichton, D'Argo, Chiana, Jool, and Pilot.  Monster is one of the former, and involves Talyn getting swallowed by a living budong (See Home on the Remains.)  Only one Geek reference, but it's lovely.  "That's no moon... That's a budong!" (If you need me to explain this, then why are you even reading this blog?)  Other less geeky reference include the obligatory bible reference when John calls Crais 'Jonah' and the famous Apollo (mis)quote, "Houston, we have a problem."

S03E09, Losing Time, is a Moya episode. The gang takes on a couple of energy beings who can possess them, and hilarity ensues.  PLENTY of geekdom here, so it's a good one to end on.  One of the incorporeal beings he addresses as Casper.  In a nice Exorcist nod, John argues that he can't be the one possessed, because "If I'm Linda Blair, why am I telling you guys anything?" John also informs a DRD "All right, we don't understand the R2-D2 crap. We're going to use the Star Trek system: one blink for yes, two blinks for no. You understand?"  This is a beautiful Star Trek/Star Wars reference.  One blink for yes, two for no comes from The Menagerie two-parter in the original series of Trek.

is available for purchase on Amazon, and needless to say is well worth the money.

Is anyone aware of there ever being separate comic and cartoon variant model sheets for Blaster (as The Ark book showed there were for Broadside and the Dinobots)?

The TF Universe book showed a non-visored Blaster as appeared in the cartoon and UK comic (who presumably used TFU as a reference), but it clearly wasn't the model sheet the Marvel US artists were working from.