After a blazingly rich Geekwatch last time, Farscape gives us a bit of a dry spell, at least as far as geek references go.  S02E16, The Locket tells the tale of Aeryn and John growing old together due to a time anomaly.  No geek or pop culture references of note. On the plus side, hey, Stark is back! S02E17, The Ugly Truth, likewise features no references of note.  It does borrow its structure from the classic Rashomon, as each crew member recounts a disastrous meeting between Crais, Talyn, and some arms dealers.  Oh, and Stark buys it!  Easy come, easy go. 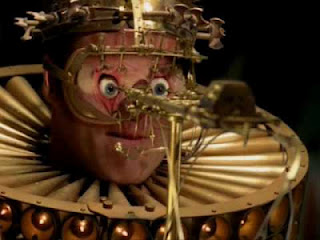 S02E18, A Clockwork Nebari (the title, of course, a reference to the Kubrick's amazing sci-fi dystopian tale A Clockwork Orange) features a bit.  The geekiest reference is Crichton asking if his captor's actions violate "the Nebari Prime Directive," which can only be read as a Star Trek reference.  Also notable is the fact that John has named his pulse pistol Winona.  Not sure what that's a reference to, possibly Winona Ryder (great actress, staring in such genre films as Beetlejuice and Alien Resurrection) or Wynonna Judd, singer.  Other pop culture references include Blondie (not only is the villain called "Debroah Harry", but Crichton says she's gonna "getcha-getcha-getcha,") the $100,000 pyramid, Jim Belushi ("you're gonna Belushi out" he tells Rygel") and a pastish of western refereneces, ("I'm bringing Miss Kitty back from the O.K. Corral.  Any word on Aeryn or Doc Rygel?")  Oh, and isn't the Nebari method of drug induction, by a patch on the optic nerve, creepy as hell?

is available for purchase on Amazon, and it's amazing.
Posted by Jimtron at 8:37 AM