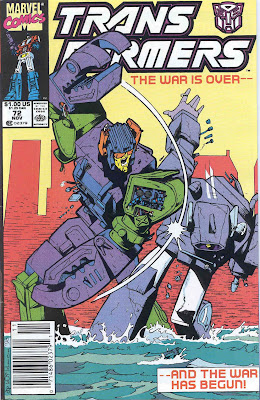 The seventy-second issue of the US G1 Marvel Comics run of Transformers is titled ...All this and Civil War 2.  It features an unchanged creative lineup for the third issue in a row, and you can feel the creative cohesion.  For those keeping score, that puts Furman as the writer, Wildman as penciler, Baskerville as inker, Parker as letterer, and Yomtov as colorist.  Editior Rob Tokar and Editor In Chief Tom DeFalco are credited as 'conscientious objectors.'  The cover is also by Wildman.

The cover is perfectly serviceable, with a damaged Scorponok whaling on Shockwave against an abstract city background. "The war is over--and the war has begun!", it teases.  It's perfectly representative of what the book is about, and the characters are rendered well enough... but it somehow leaves me flat.  Maybe I'm spoiled by the more esoteric covers we've been getting recently, but this just doesn't have the same level of creativity as, say, the extremely powerful Surrender cover from last issue.  It's a sort of solid B, amid a string of As.

Thankfully, the issue itself goes from strength to strength.  It opens amid the ruins of Scorponok's base, with Shockwave's rag-tag band surveying the carnage.  Starscream gloats, Shockwave theorizes that Scorponok might well be alive, and Mindwipe & Triggerhappy want to get while the getting's good.  Starscream's bravado quickly turns to panic when Scorponok emerges from the rubble and engages these newest foes.  The headmaster almost effortlessly deals with Shockwave's minions before grappling with Shockwave and plunging into the North River.  This sequence gives great characterization all around, from Starscream's rapidly shifting confidence to a mindless strike by Ravage to Mindwipe's hesitant "Us?! Destroy him?!", even though they had Scorponok outnumbered six to one.  Neither Starscream nor Shockwave has instilled much passion or fire in their minions.

Within the base, Autobot and Decepticon alike attempt to rally themselves.  Prime bemoans the possible death of the alliance, as well as the possibility of massive human casualties in the 'settlement across the river.'  That settlement, of course, is New York City.  Said inhabitants watch the battle as it comes closer and closer, and calls begin to trickle up the chain of command.  Eventually it reaches an oddly caricatured President George Bush (senior, of course), who calls... G.B. Blackrock!  More threads are being drawn together into this narrative tapestry, as the events of issue #68 take on new significance. And speaking of threads drawn together, we're treated to three pages of interludes.  On Cybertron, Galvatron has tracked down Emirate Xaaron, who is determined to die like an Autobot.  Galvatron wants nothing of the sort, though.  His goal is to defeat and humble Unicron, and he hopes Xaaron holds the key to achieving this goal.  Xaaron tells Galvatron of the legend, that all of Primus' children united as one can stand against the Chaos Bringer, prompting Galvatron to seek out Primus to accomplish this gathering.  There's also a great moment when Galvatron realizes that he's badmouthed Unicron too strenously, and waits for his punishment.  His trepidation turns to elation when he realizes that Unicron can't reach him within the core of Cybertron, and then his anger returns.  The rapidfire emotions make the character seem delightfully manic.

The other interlude is a one page tale on Hydrus Four, where Grimlock and the revived Dinobots tank up a shuttle full of Nucleon.  Grimlock gloats to himself about how his decision was right and Prime's was wrong... at least, he does until his leg locks up.  Ominous!  The Action Master storyline continues to advance, and surprisingly it's not at all awful or stupid.  It's a testament to Furman's skill as a writer that he could take these lemons and make lemonade with them. 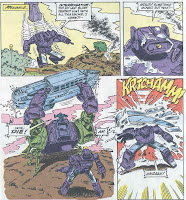 The book races relentlessly to its conclusion as Scorponok and Shockwave reach the shore of Manhattan Island.  Their battle is both visually and emotionally exciting, as two very different commanders duke it out.  Shockwave accues Scorponok of lethargy, and Scorponok declares Shockwave to be a dinosaur, ready for extinction.  Despite the risk his actions pose to the alliance, Optimus interposes himself between the two combatants, unwilling to allow humans to get caught in the crossfire.  As Scorponok prepares to cut through Optimus to get to Scorponok, a fourth faction enters the arena... Blackrock's super hero team, the Neo Knights.  Just when it looked like the tension couldn't get any higher, we introduce this new element, and the story kicks it up to the next level.

And that's the end!  Once again, Furman et al have left us wanting more.  The Decepticon/Decepticon fight looks to have only just started, with plenty of mayhem yet to come.  Galvatron spins his plans, Grimlock seeks his vindication, the Neo Knights are about to get in the way, Prime is learning what he will and won't do to preserve his tenuous alliance... what terrific material.  Wildman's expressive faces are used to good effect here, especially on actors like Starscream, Scorponok, and Galvatron.  The great writing and great artwork combine to make a superb story.

Next issue, "Unicron's on the last leg of his journey to Cybertron, and that means that just about everyone is OUT OF TIME!"  OOOOhhhh, I'm so excited!!! ...All this and Civil War 2 is available in IDW Publishing's  Classic Transformers, Vol. 5. Go on, pick it up, you know you want to!
Posted by Jimtron at 10:42 AM

This remains one of my favorite issues, if for no other reason than that it was the first issue I received via subscription (remember those days?) and it arrived in my mailbox on my birthday.