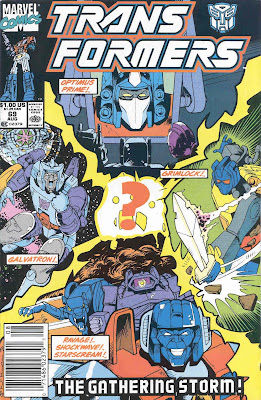 Eye of the Storm is the sixty-ninth issue of the US G1 Marvel Comics run of Transformers.  It features another superlative script by Simon Furman, terrific artwork by newcomer (to the US) Andy Wildman, Rick Parker lettering, Nel Yomtov coloring, and some perfunctory inking by Harry Candelario and Bob Lewis.  Don't worry, the inking's about to get a whole lot better.  The cover is by Andy Wildman.

I've got mixed feelings about the cover.  On the one hand, it's perfectly thematically appropriate to the issue, itself an odd collection of vignettes.  On the other, though, it's not a very appealing image in and of itself.  There's not much composition.  The eye is drawn to the question mark in the center of the page, and it's not at all clear even after reading the issue what the question is.  I suppose the first thing that springs to mind is what ties these characters together... that's not it, though.  The narrative threads introduced in this issue won't converge until issue 75, half a year away.  Still, it can't have been all bad, as this issue was what got me into Transformers way back in the 1990s.  I guess just knowing that all my favorite characters were in it was enough for me.  On reflection, this is a bad image, but a good cover.

The issue itself just moves from strength to strength.  Given the many disparate narrative threads begun here, I won't attempt to go page by page.  The main backdrop is the Autobots on the ark, recuperating after their recent trials.  The title of the book, Eye of the Storm, is particularly apt.  We've had some momentous events in the past, largely the Matrix Quest, and we're about to head full-bore into the Unicron War. The main plot points of the issue include:

Grimlock's frustration with both his inactivity, and his inability to defeat Thunderwing.  Waverider catches the Dinobot tearing up his quarters and attempts to talk some sense into him.  He nearly gets his head taken off for his troubles.  Grimlock then violates Prime's orders by taking the inert bodies of his Dinobots to a shuttle and blasting free of the ship.  He's going to Hydrus IV, to attempt to use Nucleon to revive his fallen comrades.  One of my favorite bits is his confrontation with security chief Kup.  Kup yearns to let Grimlock go with his men, but his sense of duty is just too strong.  Grimlock tricks him with a transparent ruse, and Kup's expression at this is priceless.  There's a wealth of emotion in that one look; it's clear to me that Kup realizes what's up, and makes a conscious decision not to turn back to Grimlock.  The next instant, Grimlock decks him.  It's a powerful story moment, perfectly in keeping with the characters of both Kup and Grimlock.  Remember, not that long ago Grimlock was the Autobot commander.  It must chafe him terribly to be beholden to Optimus Prime, especially when Prime is denying him permission to apply potentially life-saving (but dangerous) medicine to the Dinobots.

Optimus, meanwhile, is having issues of his own.  He sees the levity among his men as a problem, a false calm.  Worse, he suffers some kind of attack, doubling over in pain for reasons unknown.  As he prepares for a desperate step to unify the Transformers race to stand against Unicron, he first has Nightbeat work on a personal matter; Ratchet's body was never recovered from the wreckage of Megatron's tower.  Nightbeat theorizes that Ratchet may have been blown through the dimensional portal and trapped in unspace, and dispatches a probe to find him.  He then makes his momentous announcement; the Autobots will surrender to Scorponok's Decepticons... unconditionally!  It's a shocking moment, and underscores just how seriously Optimus is taking the threat of Unicron.

Cut to Scorpponok, who's having difficulties of his own.  Mindwipe and Triggerhappy desert their commander, unhappy with Scorponok's decision to allow Starscream to rejoin the Decepticons and Starscream's subsequent disappearance.  Ironically, Starscream forces them to land, where they are recruited by Shockwave and Ravage.  I love Wildman's interpretation of Starscream here.  He looks so sinister; there are so many schemes behind his eyes.  I also like the return of Ravage.  Shockwave seems to be gathering up all the strays, forming his own little army.  (A minor nitpick.  Mindwipe is surprised to see Ravage, as he got dropped down a mine shaft.  If the 'Cons knew that... why wouldn't they just come get him?  Just a quibble, though.) 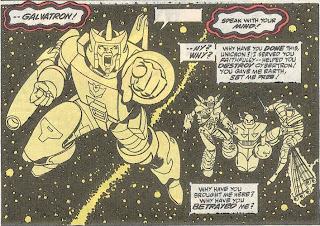 And speaking of gathering an army, Unicron is gathering up his own.  Galvatron is furious at having been plucked from his proper timeline.  He's dispatched to Cybertron, along with Hook, Line, and Sinker, to hamper the Cybertronian resistance.  I love Parker's lettering here; Unicron's voice seems much larger than life.  I also enjoy the 'speak with your mind' bit.  The yellow coloring also makes the whole thing seem very moody.  Furman's dialogue is so spot-on that I can effortlessly imagine Orson Welles reading it.

Page twenty arrives all too soon.  The pacing is such that, even though almost everything that happens is set-up, you can't stop turning pages.  There's one last twist, though, and it's the most shocking of all.  Nightbeat's probe has found something... the horrid twisted fuzed form of Ratchet and Megatron, and amalgamated horror that should never have come to be.  The eye of the storm has passed, and the torrent begins! 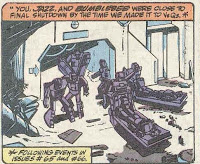 It's an incredible issue.  Wildman's expressive artwork allows Furman to really cut loose with the melodrama.  I can't imagine a better collaboration for this issue.  There are so many subtle details.  I love how, on VsQs, Bumblebee and Jazz are carted away, but Grimlock manages to limp out under his own power.  I love the lettering on the first page, and the game of Cybertronian chess (Quarg takes vig -- fullstasis!), and the toy dinosaur on Grimlock's desk, and Galvatron's silent scream in space when Unicron tortures him, and the shadow Galvatron casts against Unicron's light, and the flash of lightning that underscores Starscream's declaration of war.

This issue, more than any other, was what got me into the Transformers comic.  After getting it at a newstand while I was waiting for a ride from my dad, I hit comic shops and got up-to-date on the latest issues (I think that 70 was already out and 71 was just a week away) and started tracking down every back issue.   This issue works on nearly every level, and sets off the events that will end with Unicron's arrival with aplomb.  It's one of the best there is, and heralds more strong stories moving forward.

Next issue, The Price of Life!  Don't you dare miss it, the last page declares.  It's not exaggerating, you won't want to miss it.  Eye of the Storm is available for purchase in IDW Publishing's Classic Transformers, Vol. 5 , and comes highly recommended.
Posted by Jimtron at 10:29 AM

The only thing I personally hate more than Wildman's Transformer faces is Figueroa's Transformer faces in the IDW ongoing. Wildman's faces are too much like humans wearing a helmet. Full musculature and teeth and tongue. The only way you know they aren't human is because they are in inhuman colors, pupil-less eyes, and no eyebrows—which only makes them super-creepy.

I was glad for the relief when I got to Senior's issue.

I guess we'll have to agree to disagree on that. I thought that his faces were wonderfully expressive without looking like anything other than Transformers.

Indeed, the question mark & electrical "blob" on the cover looks very out of place, it really didn't need that. Or the names by each character for that mater. But then again I'm prejudice about text and bubbles mucking up artwork in general, so my opinion might be off on that one.

On a silly note, Galvatron's pose is somewhere between a football player scoring a touchdown, and Tiger Woods' victory arm pump. :P

And even sillier, Starscream's grin has an uncanny resemblance to.... Rosie Perez.

No really, it does! Google it and see for yourself!

My take on the cover is this: the electrical "blob" at the center of the cover clearly has the outline of the fused Megatron/Ratchet's heads. You can clearly see their (round) eyes and mouths, too. And the question mark basically says: "what's this?".
They come from a space between spaces, so that's why they cast bolts throughout all the different places/spaces seen on the cover. They are everywhere and nowhere on the same time.
I think this cover is great, anyway :)

As for Ravage, they probably couldn't find him because he managed to get out of the mineshaft before they arrived to pick him up, I guess? :)

I always use the last page of this issue and the first page of the next issue (these pages are side by side in the Titan collection "All Fall Down") to show people what kind of difference an inker can make. Stephen Baskerville not only put a great line on Wildman's pencils, he also added lots of detail. It's basically the same Andrew Wildman drawing in those two issues, but the effect couldn't be more different. And it's all in the inking.

I loved the insane amount of detail in the artwork. Todd McFarlane was drawing Spider-Man at this point, so it was all the rage in the early 1990's. The expressiveness of the faces certainly managed to bring across more emotions from the Transformers than ever before.

Ok dude, you have a very good eye there, that certainly HAS to be Ratchet&Megs in the center. Wow, I'm sure there's not many who have ever noticed that. Perhaps it would be more apparent without the question mark, it obscures it pretty well.

As for Ravage, Hound would be happy to remind you how the Decepticons don't care for anyone - even their own. :)

Wow, never noticed that. Yeah, that is what we're looking at. I still think it's not a great image, but it's a terrific cover. Those two usually go hand in hand, but this time the paths diverged.