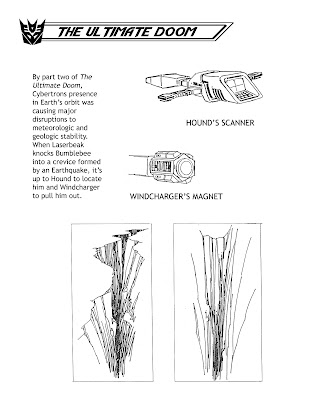 A very busy week for me!  I've been having trouble finding the time to blog, though I hope that this week I'll get all of my usual features (reviews of the Marvel TF run, reviews of War of the Worlds, the series, and of course an Ark Addendum) up.

To that end, The Ark Addendum!  Let's circle back to The Ultimate Doom.  I'd previously covered the first episode with three sets of background models.  Now, we're up to the second episode of the trilogy.  There's a scene where Bumblebee has to change his tire (with a little help from Spike) and falls into a crevice formed by an earthquake.  Naturally, Laserbeak happens along at about this point and knocks him in.  Fortunately, Hound has a nifty scanner to locate his diminutive companion, and Windcharger swaps out his arm for a high-tech magnet to pull him out.
Posted by Jimtron at 9:57 AM

Different design was used for Windchargers magnet in the episode.