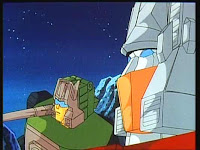 Twincast: My God! What is that?
Zarak: At last, it is finished. My work of art – Scorponok.
Mindwipe: Incredible!
Zarak: Come aboard.
Mindwipe: It's amazing!
Zarak: Wait, there's more to come. You're about to see something even more amazing!

Here is the exciting conclusion to this two-parter revolving around Zarak's plan to destroy Mars in order to collect the plasma energy from the resulting explosion. Fortress Maximus is completed depleted of energy and unable to transform due to the attack which closed out the previous episode, while Highbrow and Brainstorm are recovering from their injuries. Spike, Daniel and Wheelie have been safely returned to Athenia, thanks to the Trainbots. Now there is a waiting game as the Autobots still search the planet Mars for the bomb coordinates, not even knowing how much time they have remaining.

Hardhead monitors some activity nearby, spots a Terrorcon and he and Chromedome immediately charge forth to attack. They are met in battle by the Decepticon Headmasters, however. In response, the Trainbots are ordered to return to Mars in order to assist in the fight. Strangely enough to the Autobots, the Decepticons depart in haste, while we the viewer have seen Zarak command this retreat.

Suspicious of this enemy retreat, Fortress contacts Ultra Magnus at Autobot City on Earth to uncover any information they can from the Decepticons residing there. Magnus dispatches Twincast to infiltrate their opponents' base. We see Twincast stealthily approach the Decepticon Earth HQ, which is currently guarded by Thrust and Dirge. He dispatches Steeljaw and Rewind, distracts the "coneheads" with a direct assault and Rewind sneaks inside.

On Planet Zarak, Zarak is ready for the final stage of his plan and commands a select group of Decepticons converge on Chaar. Soundblaster contacts Sixshot on Earth and informs him that he needs to attend. All of this is overheard by Rewind, who reports back to Twincast. They proceed to follow Sixshot to the Decepticon space bridge, which appears to be the same one at the bottom of that old riverbed from Season One. Admittedly, this was great to see, as were the cameos of Thrust and Dirge. Anyway, Twincast follows Sixshot, using the space bridge to transport him to Chaar.

Once there, Twincast, hidden away in the main Decepticon HQ, witnesses a bold presentation, broadcast from Planet Zarak. We all watch with Soundblaster and the rest (Astrotrain, Blitzwing, the Predacons, etc) as the small planet cracks and crumbles in space, revealing the massive form of Zarak's transtector, Scorponok. The Decep Headmasters, after having fled Mars, are invited on board, before it transform from city mode to scorpion and heads for Chaar. The Decepticons prepare to welcome Lord Zarak but suddenly Soundblaster discovers Twincast and the two long-time, well-matched enemies engage in a fight. Cassettes warriors from both of them are tossed into the mix as well yet Twincast is able to escape.

Fortress is altered of this development while Chromedome and the others are battling the Terrorcons. Highbrow and Brainstorm, fully repaired, join the fray. Scorpnok then appears over Mars, to everyone's amazement, having warped in from Chaar, and easily defeats all the Autobots nearby. He then heads towards Fortress, who is still unable to transform and has no energy.

Fortress: Zarak!
Scorponok: My name is no longer Zarak! I am Scorponok!
Fortress: Scorponok, you say?
Scorponok: Fortress, now you are going to pay for kicking me off Planet Master!

Transforming to robot mode, Scorponok proceeds to trounce the inert Fortress. However, he is informed that the bombs are all in place and instructs Soundblaster to begin the countdown. Soon, the bombs placed at the poles erupt, followed by the plasma charges and Mars is engulfed in flames. The Decepticons retreat and Fortress orders his Headmasters to follow suit. Chromedome insists they save their commander and they rush inside the great battleship. As they find themselves surrounded by explosions on all side, they realize that the energy produced is being absorbed by Fortress Maximus.

Mars is destroyed as Scorponok watches in glee, but he is soon shocked to see Maximus flying out of the flames and straight towards him. He absorbed enough plasma energy to transform and escape and he successfully routes the Decepticons, with a strike of his Master Sword to Scorponok's shoulder. There is rejoicing by the Autobots due to Fortress's survival yet this is greatly tempered by the shocking failure to save Mars from destruction.

Thus concludes the mini story arc following the destruction of Cybertron as we watched Zarak's mysterious plans and construction of his transtector finally come to fruition. Zarak has turned out to be a most dangerous and unpredictable foe, even moreso now with the aid of Scorponok. This two-parter was as tense as the pair involving Cybertron and nicely rounds out the first batch of 15 episodes of the series. There are few sub-par installments in this group, such as "Terror of the Six Shadows" and "The Dormant Volcano Mysteriously Erupts", but overall they provide a fun mix of action, mystery and character, following new and beloved characters.

It's interesting to wonder what would have happened if the US G1 season four had not been limited to three episodes. Here Takara held off on the reveals of Maximus and Scorponok until a dozen episodes had passed, building the tension with shocking crises and major leadership changes on both sides. It's obvious that the US G1 series would have also shown a power struggle between Galvatron and Zarak, as seen in this series, but who knows if the former would have been driven off-screen completely.

I also had a thought about Soundblaster, while watching this episode. Soundwave had always appeared fiercely loyal to Megatron and later Galvatron, no matter who attempted to usurp command. Now remade as Soundblaster, he seems to have become more shrewd, letting his allegiance follow whoever appears to be the final victor for role as Emperor, in this case Zarak. This aligns a bit more with his portrayal in the Marvel comic book, so it's interesting to note this change. Also good to see another showdown between he and Blaster... I mean, Twincast!
Posted by Brian at 11:29 PM

This is one of my favorite episodes. I love that they actually offed Mars. It's also fun that from the death of Mars comes the revival of Fortress Maximus.

Indeed! Small consolation for those of us living in the solar system in the HM series - no more Mars, but at least Maximus survived! :)

This 2-parter is a cool one for sure, I forgot how much neat action & suspense was included in these episodes. Plus - Terrorcons!

Well, not that I'm advocating blowing up Mars, but it's not like we're using it for anything. (Though I think Marissa Fairborne was stationed there in FFoD maybe?)

I seem to recall that there was a Mars base in US season 3, in the FFOD mini-series. Hopefully it not manned at the time of this incident! Marissa might have been promoted to a cushy desk job by them.