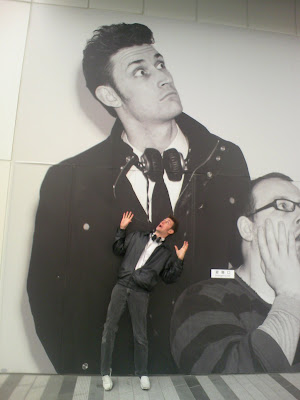 ... to my good friend Hydra. He helped put together The Ark II, providing a ton of models and fact-checking all my assertions about continuities that I wasn't 100% conversant with.  He's also helping out a bit with the Almanac II, so thanks for that!

Anyway, Hydra one of those really interesting people who I feel fortunate to have in my life. He's a permanent resident of Japan, where he stars in film and television.  He's figuratively (and literally - the man is over 6'5) Big in Japan.  He sent me an awesome photo that I wanted to share, depicting him coincidentally bumping into and advertisement featuring himself when out with his girlfriend's family.  Good timing!

So, congratulations on all your success, Hydra!

Finally, my pals over at the moonbase2 podcast scored an interview with Townsend Coleman, the voice of Sentinel Prime, The Tick, Michelangelo, and Must See TV. The man is an all-around class-act, and gives two hours of his time to these gentlemen.  He's insightful, friendly and gives a might "SPOOOOOOOOON!!!!!," so give it a listen. Pay attention at the one hour and eighteen minute (or so) mark.
Posted by Jimtron at 1:04 PM