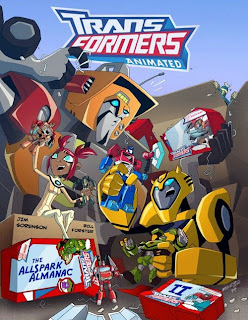 Well, I'm a bit late to this party, but I figured I may as well post the covers to  The AllSpark Almanac II

(preorder it today!) .  Marcelo Matere, my editor Justin Eisinger, Bill Forster and I wrangled back and forth over what exactly the cover should look like for a while. One idea was to feature Decepticons, since season 3 has a darker tone than seasons 1 & 2, and it would mirror the first volume. On the other hand, we wanted to keep the same sense of fun that the first volume had, and not too many Decepticons can pull that off.  We did have an idea about bumbling Constructicons building the cover, which seemed fun, but we also wanted to get some of the core characters into the mix. Finally, we wanted a cover that not only communicated 'season 3,' but also said that we'd be delving into the toy side of things. 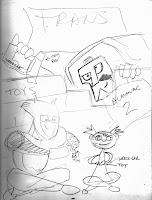 It was Bill who eventually came up with the final idea. He drew a quick, 30-second sketch as proof of concept and sent it to the rest of us.  I think everybody immediately agreed that the idea was a winner. We were especially keen to have Wreck-Gar in the picture, playing with not the toys but the detritus AROUND the toys.

I think it came out just lovely. It did everything we set out to do, kept the tone perfectly with the first book while setting up the differences in the new volume. Marcelo posted the black & white image over on his Deviant Art account, and Priscilla Tramontano (the colorist) posted the color image sans-logos over on her Deviant Art page. Be sure to check them out!
Posted by Jimtron at 9:24 AM

I love this cover the moment I saw it on Amazom.com. I look forward to buying this for my collection.

side note : will there be a section covering the cast and crew of the show ?

I like that the upbeat nature of the cover matches the show and from Almanac Volume 1 too. I like upbeat and fun. To me, Animated was the most enjoyable TF series to date because it was fun and upbeat without dumbing down the audience.

I cannot wait to get it.

Love the cover. Pre-ordered it from amazon so all that's left is to wait for the mailman to try to stuff it in my mailbox. (At least it's soft cover.)

And you still got your Decepticon, with Soundwave peeking in!

OK so Almanac II is toy centric I hope its not at the expence of any of the other character models.

Have you been able to get any pics of any of the prototypes that we haven't seen yet? (not asking for names, just a yes or no)

so are we gonna get a bunch of team char stuff in this one.