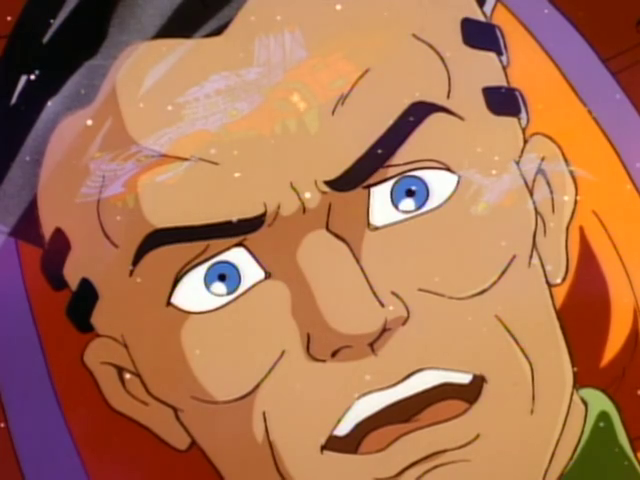 "They have gathered themselves in one convenient place just to make it easier for us."

After the powerhouse that was season one of Exo-Squad, season two has big shoes to fill. The Gathering, the fortheenth episode of the series, picks up at the two year mark. It's been another few months since we last left our heroes. Marsh and DeLeon are dispatched to Saturn to attempt to forge an alliance with the pirates, which gets off to a rocky start when the Pirates take them prisoner. Able Squad is tasked with gathering resistance leaders from Earth and Venus and bringing them back to Io to better coordinate. Typhonus follows them back and locates the Exo-Fleet base, precipitating what could easily have been the final battle in the war. The Exo-Fleet is seriously outmatched, but they've been working on a GRAF shield and use it to force back the Neo Sapiens... though the shield breaks in the process, leaving them defenseless. To make things worse, Phaeton has co-opted a high ranking pirate, Barca, and is well aware of the dangers of an Exo-Fleet / Pirate alliance.

What works: Big-picture-wise, this is a great episode. It's exciting, picks up right where the last one left off (in plot, if not in time), and the tension of the outmatched Exo-Fleet is a great dynamic. Perhaps my favorite bit is the return of Doctor Algernon and the GRAF shield. It makes the Veil of
Doom plotline feel much more relevant to the overall story. That the GRAF fails in the end due to substandard parts is both realistic and dramatic. Dramatic in that the Neo Sapiens think that Io is impregnable when it very much isn't, and realistic in that this was originally presented as a multi-billion dollar project. The idea that cobbling another one together wouldn't work well makes perfect sense. There are hints of Algernon's former arrogance, though now frustration seems to be at the fore. 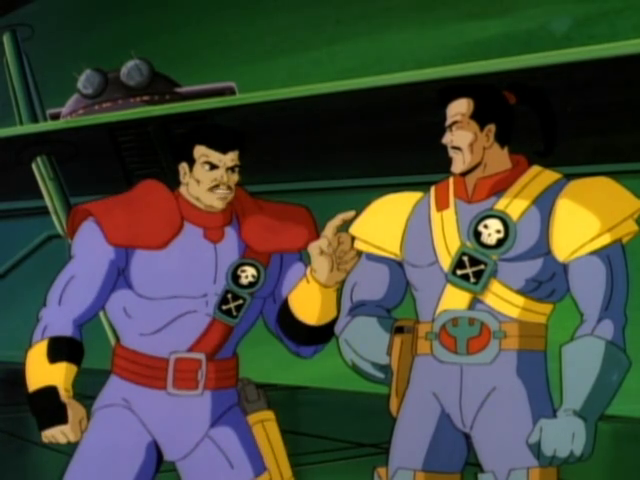 The return of the pirates, though of course brought up last episode, is a welcome development. We get to know two more of them by name, Barca and Chubail. (Spelling uncertain, but Will Meugniot, the Executive Producer, said that mine look about right.) While both are antagonistic towards the Exo-Fleet, Chubail seems to have a strong code of ethics, and Barca seems to be more the opportunist type. Since the potential alliance is shaping up to be an important plot point, it's nice to get more named Pirates to root for and against. 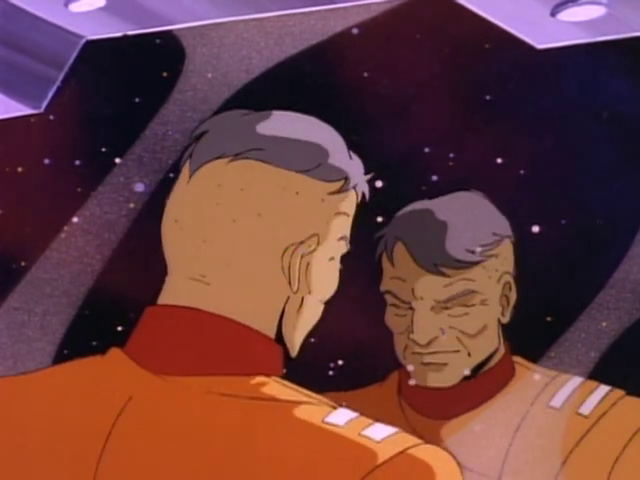 Another plot thread picked up is the strained relationship between Typhonus and Phaeton. "I will have one head or another" threatens Phaeton. Typhonus has apparently spent the last 8-9 months scanning the asteroid belt and coming up empty, which is mostly reasonable, but see below.

Winfield has gone grey. Nice touch. The poor guy has been through a lot. The scene with him giving DeLeon the mission has some nice body language as you see a close-up of J.T.'s and Alec's hands as they hear the news. I also like the compartmentalization of the scene, keeping Marsh's mission to Saturn very much separate from the gathering of the resistance leaders. No need for the left hand to know what the right hand is doing. 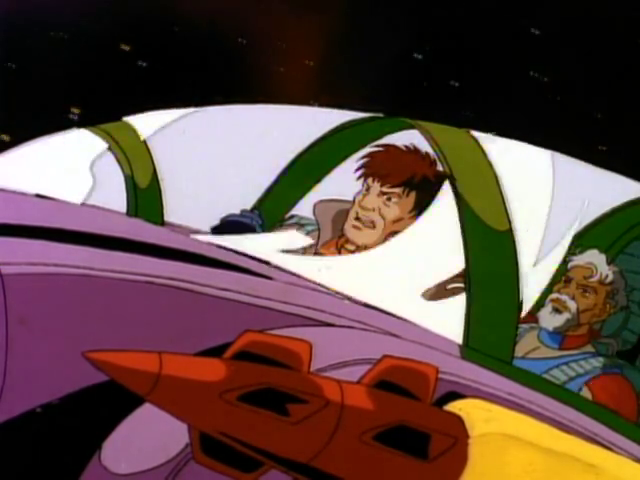 There's another very tough fight this episode, as Able Squad attempts to grab resistance leaders. Bronsky (who is once again in the wrong frame, another recurring theme) gets pinned down by six Y-Wings. Torres and Takagi can barely spring him, though they manage. We also meet Nick Tyree, the Australian resistance head-honcho destined to become another antagonist. 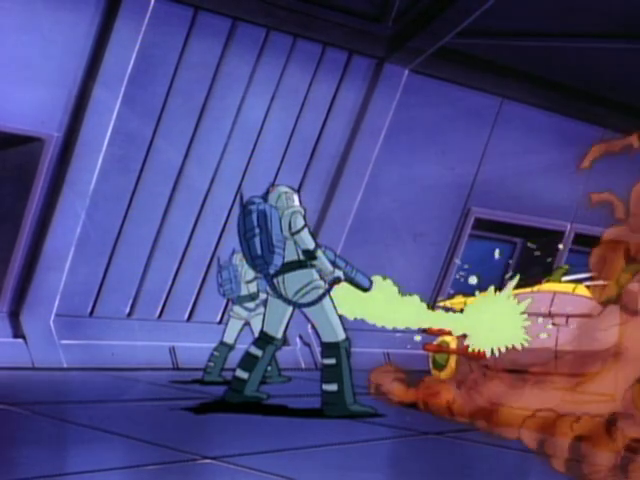 As a measure of how tough the fight is, Bronsky comes in hot and apparently can't get his legs down, leading to a crash landing. DC teams get deployed and everything, which is pretty cool.

I love the moment when Marsh and DeLeon defeat a couple of Neo Sapien scoutships and shout "yes" in triumph, only to have the moment ruined by the decloaking of Pirate vessels. It's a nice way to yank the rug out from under the characters and the audience. 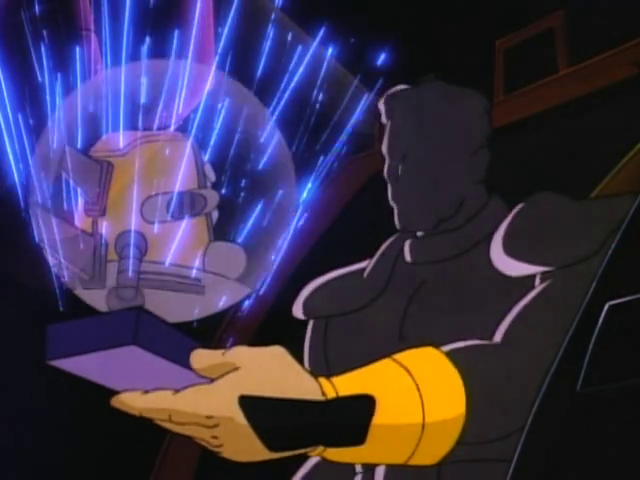 Phaeton remains sharp. He had apparently proactively recruited an agent among the Pirate Clans (Barca, as we learn at the end) well in advance of Winfield's mission to Saturn. He also instantly sees the danger of a Pirate / Exo-Fleet alliance. The Pirates possess a large spacefleet of vessels with unparalleled cloaking technology. The Exo-Fleet possess superior fighter technology and have much more experience in attacking planet-based targets. Putting them together is a real threat to Neo Sapien hegemony. 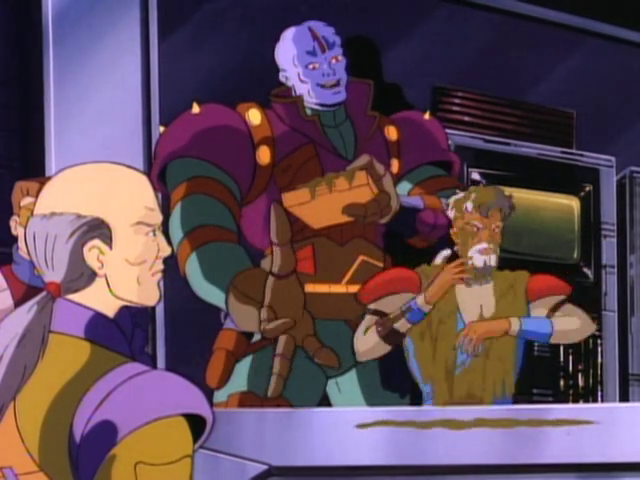 Marsala takes Tyree down a peg when the latter starts to insult Admiral Winfield, which is nice character development for them both, but the real gem is when he makes the excuse that he's "all thumbs." That's legit funny right there.

The new credits are great! I mean, my episodes have been using the S2 credits all along, but if you were watching back in the 90s, this would be your first exposre, and they're fantastic. (But see below.)

What doesn't: Most of  the flubs are pretty minor. There are occasional animation flubs here and there. There's a beeping sound they use three times in the episode that's pretty annoying. I'd have given it a pass, but three times is an awful lot in one episode for the same FX in different contexts. 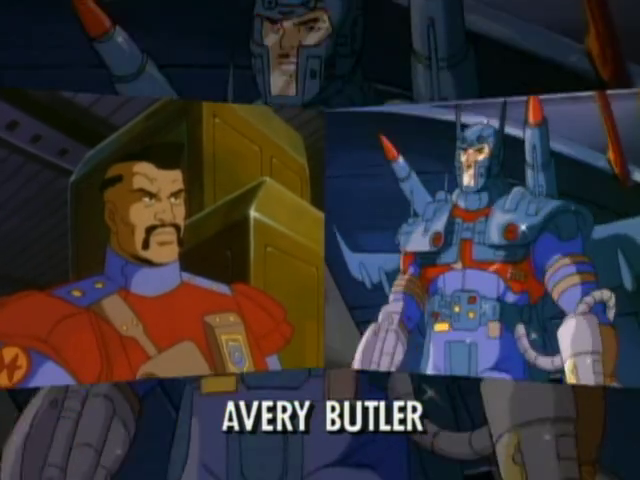 The credits feature two new characters, Butler and O'Reilly, neither of whom are in this episode. Not horrible, but a bit awkward. (What's worse is that they won't be in it until episode... I want to say 7.) Though, other than the two of them, the S2 credits work remarkably well for both seasons.

The time jump is a little awkward. There's some hand-waving to make it work. Typhonus spent months combing the asteroids, but there's a line of dialogue last season about how the Exo-Fleet had been spotted departing the Jovian system. Also, there are only a handful of outer planets, you'd think you'd start by checking them before sweeping a massive asteroid belt. Moreover, it's not really necessary. One can imagine that it took Winfield a few months to make contact with the Pirates and establish some sort of dialogue, but this episode could just as easily taken place at month, say, 16, and nothing would have been any different. 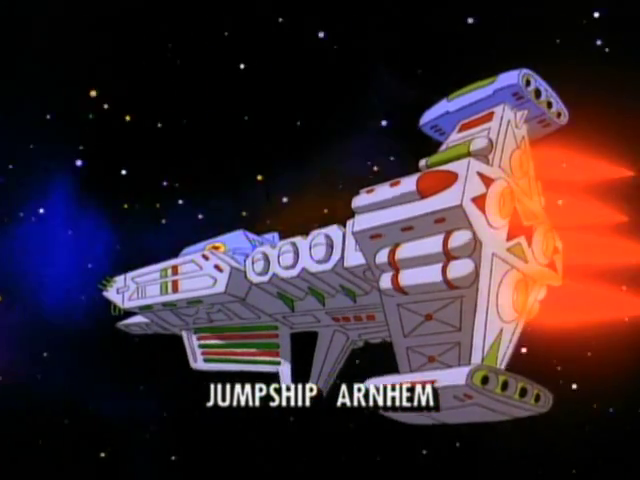 Watch for: The ship flying Able Squad around is the Jumpship Arnhem. (Possibly related to the new jumptroopers in the credits? Yes indeed.) This ship will become one of the more important vessels in season 2, now that the Resolute is out of the picture.

Unsurprisingly, Tyree, Chubail, and Barca will all continue to play important roles as the series progresses.

Overall: This is a great episode, serving as an adequate introduction to the series and a great continuation from what went before. The tension is much higher here than it ever was during season one, in part because the situation has become so dire. One base, severely outgunned heroes, desperate alliances, villains several step ahead. If this is what season 2 looks like, count me in!