The Ark Addendum - The Autobot Run 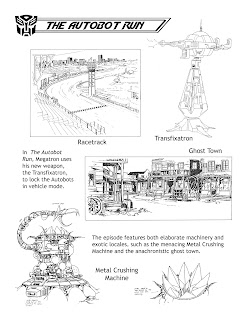 Well, after a couple of months off, I managed to find the time to put together one more of these.  Not too many left, unless I find a new source!

This week (month?), I bring you the models from The Autobot Run.  It's a good episode and it has especially interesting models.  There's the Transfixatron, of course, but I'm especially partial to the model sheets labeled "metal crushing machine."  The wiki makes fun of it as a tentacle monster, but it's really quite a frighting design.

I'm also rather partial to the idea of setting the episode in an old west ghost town. Why? Why not!

Here's a bit of trivia for you, by the by. The Transfixatron was originally called the Satsitron. That could be a typo on the model sheet for Stasitron, or it could just be a flurry of creativity on the part of Donald Glut.  (This trivia note appears on the wiki. Did I put it there? I don't imagine there are too many other people out there with model sheets.)
Posted by Jimtron at 11:08 AM

It's kind of a shame they didn't take greater advantage of the locale then they did. I can imagine a completely different story altogether, here it seems almost a waist.

The jaws/beak/?/mouth and tenta-claws of the Metal Crushing Machine remind me a little bit of the Sarlacc from Return of the Jedi. Possibly yet another 'borrow' from Star-Wars?

What would be disturbing is if the metal crushing machine wasn't a new invention. I don't find it hard to believe that past versions of it on Cybertron were used to mass-execute Autobots, neutrals, and the odd Decepticon.

Any updates on the box art book?

The jaws/beak/?/mouth and tenta-claws of the Metal Crushing Machine remind me a little bit of the Sarlacc from Return of the Jedi. Possibly yet another 'borrow' from Star-Wars?

The Sarlacc didn't have a beak until the Special Edition.

I didn't even know a beak was added for the new CG enhanced RotJ, but that's interesting. George reconnected it to make it more like G1 (kidding)!

Hey, Drmick, nothing I can talk about right now. I recently got a tiny bit of extra artwork. Still nothing on IDW's schedule.

As in book might not see light of day?! Or just a late 2013 at best type of thing? Thanks anyway.

Well, nothing's set in stone, but every indication I've gotten is that IDW wants to publish it and Hasbro has approved it, so it's just a question of logistics. Still, letting IDW know you're enthused about it couldn't possibly hurt.

The ghost town seemed odd or out of place somehow but it also had atmosphere, so I can forgive it this one time for being yet another deserted location. :-)

There’s a bit of western-y music when we first see it that AFAIK was not used anywhere else in the show.