Apologies for my long absence... and Farscape Geekwatch

Well, here it is, January 10th, nearly two months since my last post.  I didn't mean to let it slip this long.  I got busy with the holidays, took a couple of trips to the East coast, got a nasty stomach virus... all the usual things when life gets in the way.

One of the factors is that, believe it or not, I'm running very low on Ark Addendum material.  I've still got some pieces to share, but not a lot, and what I have needs more work.  I'll try to share what's left.  Does that mean no more animation models for you?  No, no, no.  I've got the next Joe animation model book due out in a few months, and after that, anything that didn't make it in (that I'm ethically allowed to share) will start to find a home here.  Yo, Joe! 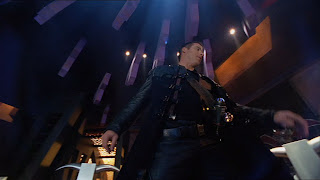 And now, the content!  We're up to the series finale of Farscape on our geekwatch.  The penultimate episodes are the three parter, S04E19-21: We're So Screwed.  This is, incidentally, my favorite sci-fi episode title ever.  The first part's subtltle, "Fetal Attraction", is of course a reference to the movie Fatal Attraction. (We also have "Hot to Katratzi" and "La Bomba".)  Oddly, part one is a bit disconnected from the other two, featuring a raid on a Skarran outpost that results in Aeryn retrieved, but Scorpius captured.  John would, of course, gladly let Scorpy go, except Harvey returns, claiming falsely that Scorpius has wormhole knowledge and John has to rescue him lest the Scarrans extract it.  The other two parts are a more unified whole, featuring John's dramatic rescue of Scorpius.  Crichton's journey is nearly complete. He's gone from a peace-loving scientist in search of truth to a nuclear terrorist, dancing on a table with a bomb strapped to this thigh. The imagery of him actually detonating said device in a strategically important field of flowers is terrific.

There are some hiccups, like the return of Stark.  At first it looks like Stark is working with the Skarrans to torture Scorpius, something that seems totally in character for him given his hatred of Scorpius. We find out it's just another replicant bioloid, albeit one who can use Stark's Stikira abilities to torture. I think that missed a trick, frankly. Still, nice to have him back. 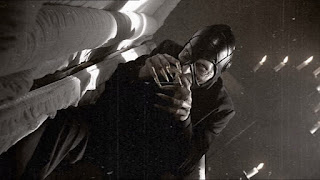 The geek is plenty. When Harvey returns, it's via an extended homage to Dracula. John calls an elevator with drilling capabilities, appropriately enough, a Wonkavator. (It's a silly plot conceit to have it there, but if you're going to have it there calling it a Wonkavator is almost a must.)  In reference to Braca's loyalty to Scorpius, John rattles off "feel the love, Mr. Burns" to Scorpius, once again casting Braca in the role of Smithers.  John describes himself as able to "leap tall galaxies in a single bound," paraphrasing the narration to the old Superman radio serials.  And speaking of super heroes, John calls the secret chamber growing Skarran flowers the 'Bat Cave.' 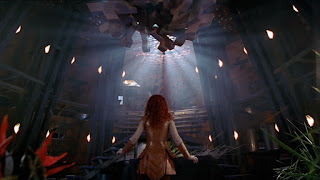 There's lots of other pop culture too.  Much revolves around the bomb.  When he's describing what happens if the bomb goes off, he calls it "John Lee Hooker time."  I had to look that one up, Hooker was a blues musician with a hit called "boom boom." "Get ready to kiss your ass goodbye, Castro," John quips to the Skarran emperor when the latter attempts to heat probe the former, for the Cuban dictator.  "We didn't need no stinkin' code," John sneers, in a nice homage to the oft (mis)quoted line from The Treasure of the Sierra Madre.  The bomb itself John calls Fat Man, the second and, hopefully, final atomic bomb ever set off as a part of active warfare.

The female Skarran war minister he calls Lady Macbeth. That's not the only nod to the Scottish play, when John paraphrases "If it were done when 'tis done, best it were done quickly."  Ahkna is also called Minnie Pearl, the actress from Hee Haw, in reference to her enormous hat.  When trying to convince the Peacekeepers and Skarrans alike that wormhole tech is for sale, he calls it a "blue light special in aisle 3, free set of steak knives and all the tea in China."  The blue light special is from old K-Mart ad campaigns, steak knives call to mind late-night tv deals, and all the tea in china has been a phrase kicking around for over a century.  Finally, John remarks on rescuing Scorpius that "Cadaver and Hutch" are back together, nodding to the classic cop show Starsky and Hutch. 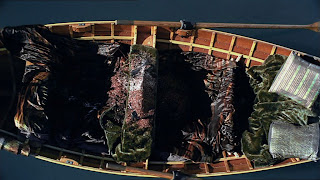 The show's not quite over yet, though.  The final episode, S04E22: Bad Timing, serves as a sort of Coda to the series.  The Skarrans realize that Earth is a potential target for them, due to the special flowers that grow there that boost Skarran intelligence. John has to close off the wormhole forever, denying himself even the possibility of home.  It's rather poignant, watching him have a last conversation with Jack by phone from the moon.  After they collapse the wormhole and toast a Skarran scout craft, the gang rests up on a water world and John proposes to Aeryn, which the gang hilariously misinterperts.  He puts the ring on her finger.  With the series seconds away from ending, things look great... until a new alien comes along and blows Aeryn and John, literally, to hundreds of crystalline pieces.  The End.  I have to admire the producers for sticking to their guns and not cutting out the last action bit, even after they found out they were canceled. Given the very strong Peacekeeper Wars miniseries that ties everything up, it was the right call. 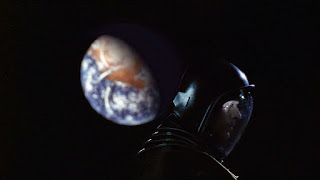 There were some nice moments.  John's last conversation with Jack from the moon was pretty touching.  Sikozu, when she and Scorpius are exiled back to Braca's command carrier (oh, yeah, he came into his own last episode and relieved Commandant Grayza of command.  Good for him!), says of humanity "weak species," echoing what the Skarran spy version of her said in an unrealized reality.  Foreshadowing for her eventual betrayal?  Most of the pop culture centered around that scene.  The Command Carrier is called the Queen Mary, and Sikozu is called both 'Miss Britannia' and Goldilocks.  Later, John complains that he's "not fast enough, smart enough, alien enough, and you know what, there are people in the universe who dont' like me," inverting the Stuart Smalley-ism.


And that's Farscape!  The show, anyway.  I'll have one more geekwatch that covers the Peacekeeper Wars, and it'll be a goodie.
Posted by Jimtron at 10:53 AM