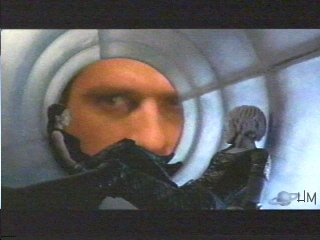 We enter the midpoint of the final season of Farscape with a truly fun episode, S04E08, I Shrink, Therefore I Am.  A gang of raiders wearing mechanical armor boards the ship, leaving John to, in his own words, go "one by one, the Die Hard way" through the baddies. If that and the title (a reference to Descartes famous rebuttal of radical skepticism) aren't clue enough, there are plenty of geek references, nods, and movie titles bandied about.

Dargo is called "James T. Dargo."  Sweet.  John declares "I'm goin'... wabbit hunting!", a lovely Looney Toons quote.  Even better, John calls the head armored baddie "Imperious Leader", after he comms "Paging the head Cylon," recalling the classic Battlestar Galactica.  John utters "Klaatu barada nikto", the famous phrase from the 1951 classic The Day the Earth Stood Still.  (That line itself has been referenced numerous times, from the Star Wars expanded universe to Army of Darkness.)  After the shrinking starts, John declares that he's "gone from Die Hard to Honey I Shrunk the Prisoners," in reference to the Honey I Shrunk The... franchise.  Less geeky but still of interest is John quoting Neil Armstrong, "one small step for man,"  and the "best laid plans", a paraphrase of the Robert Burns poem "To a Mouse."

Another terrific exchange in the "we're not Star Trek" vein is Sikozu's argument with Rygel about how shrinking is impossible.  If the molocules were shrunk, how could they breath?  If they lost atoms proportionately, how could they think?  Rygel shuts her up with the wry observation that they clearly ARE shrunk, so it IS possible, so just deal with it.  Lovely.

There's less going on in S04E09, A Prefect Murder.  The gang needs some gear to survive in Tormented Space, but Chiana's loose ways and a love affair between Sikozu and a native complicate things, especially when the gang lose control of themselves and start bumping off natives.  It's rather forgettable, really.  There's a bit of the geek, when John assumes a Scottish accent and grouses, "I don't knew if I can get the system back on line, cap'n."  That's about it, except for John singing "You take the high road..." from the old classic song, The Bonnie Banks o' Loch Lomond.  (Also Scottish!) 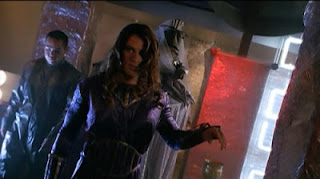 S04E10, Coup by Clam, is surprisingly fun, though I'll bet most fans don't appreciate it.  True, there's a jumbled feminist message that doesn't really work.   But the idea that the crew gets psychically linked together by eating mental mollusks is cute, and seeing the gang cross-dress is silly and fun in a very Farscape way.  I also like the villain attempting to explain the technical specifics of what happened, only to have the crew moan that they just don't care.  There's one fantasy reference here.  John states that he isn't going to infiltrate a girl's only club "as Maid Marian," Robin Hood's sweetheart.

I think I'll end it here.  As we hit the halfway point of the season, we start off on an exciting new plotline that propels the series through to the end.  Much merriment and mirth awaits!