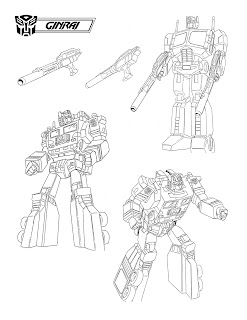 Welcome to another exciting edition of The Ark Addendum!  This week, I give yet another page to Ginrai.  Long-time readers will no doubt realize that I've already given him three pages of transformations, as well as six pages in The Complete Ark.  (I think it was 5 in The Ark II.)  What can I say?  He's the main character in Masterforce, he's got 3 robot modes, a drone, an alternate mode, a human form with and without armor... it adds up!

This will, in all likelihood, be the last time I devote a page to Ginrai, though, as it represents my last unused Ginrai models.  Sure, I suppose I may come across a new cache of material that might include the transformation for Godbomber or GodGinrai, but barring that, this is it.

So, what are we looking at here?  First up, we've got regular Ginrai with a pair of guns.  They look pretty badass on him, mostly because they're sized for his super form.

I also include the UNarmed character model for Super Ginrai.  For some reason, I used his armed version in the book.  I'm pretty sure I had both versions, so I'm not sure why I went with that version.  Usually I used the unarmed version if I had it.  Maybe it just looked better on the page; it certainly has a nice flow.  Maybe it was because I'd already included the stand-alone guns on the Ginrai page, and wanted to indicate that, indeed, he has weapons.

Finally, there's a version of Super Ginrai crouching.  This model partially made it into the book.  I believe that it's mostly there to show what his collar area looks like, so for space I cut off his legs.  Now you can enjoy him in all his squatting splendor!
Posted by Jimtron at 1:56 PM

Nice! Interesting that even the shoulder guns are removed...

Ah, how I miss my Powermaster Prime.