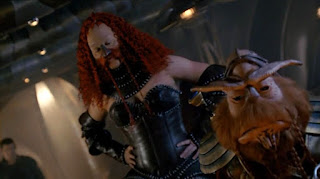 Hola, amigos!  Let's return to some Farscape, when S4 starts to pick up again after meandering a bit unsuccessfully around the question 'how will Scorpius fit in with the crew of Moya.'  (Spoiler alert: not well.)  S04E11, Unrealized Realities, introduces some new plot elements and some much needed energy into what had been an unimpressive season.  John, floating in his space suit outside of Moya, gets sucked into a wormhole and encounters a representative of the beings who created the ancients.  Einstein, as he's dubbed by John, is deciding if John should be executed for the good of the galaxy.  We get to see snippets of alternate realities, more and more strange as the episode progresses. From a world where someone who looks a lot like Scorpius is John's father on a Scarran occupied Earth to a Moya where the crew has all swapped species to a world where John is a Peacekeeper captain and Sikozu a Skarran spy, we see all manner of 'unrealized realities. 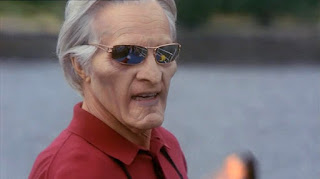 It's quite intriguing, especially when Einstein introduces the idea that wormholes bridge not just space but time.  It makes sense... exceeding the speed of light, in a very real relativistic sense, allows travel backwards in time and upsets causality.  The episode ends with John returned home... to Earth, that is, floating above the atmosphere in his space suit, wondering what exactly this portends.  A great episode, and it was fun seeing Stark, Crais, Zhan, Jool again.  There's also a couple of little pieces of foreshadowing embedded, such as when Stark/Sikozu mutters the word "katratzi" during a trance, or when spy Sikozu calls Peacekeepers "weak species."

Worry not, for it's also probably the geek-heaviest episode in the entire series.  Where to start, where to start.  Well, John, upon meeting 'Einstein' (I won't explain who Einstein is) says "Nanook, Bealzebub," simultaneously referencing Mork and Mindy and Christian mythology.  Einstein repeatedly asks John "time," prompting the responses " 's up", "bandits", "wounds all heels", "rosemary and thyme."  John managed to sneak in Simon and Garfunkle, Groucho Marx, and the cult classic Terry Gilliam movie all in a few lines.  In response to Einstein's philisophical musings on time, John says "very Morrissey," a nod to the indy musician.  The tiny snowy island created by Einstein for the interrogation, John calls the "island of misfit toys," in reference to the Rudolph the Red Nosed Reindeer claymation.  In response to the alternate worlds Einstein was showing him, John stated "now I know how Copperfield got Shiffer," referring to illusionist David Copperfield's long engagement to model Claudia Schiffer. When Peacekeeper Captain Crichton attempts to save spy Sikozu and she expresses skepticism, he echoes Gone with the Wind and quips "frankly, my dear, I don't give a damn." 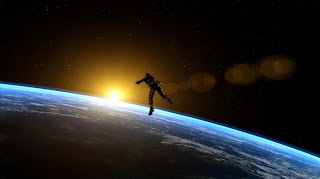 But all of that, lovely that it is, pales in comparison to John's final speech of the episode.  "I am not Kirk, Spock, Luke, Flash, Buck, or Arthur frelling Dent.  I am Dorothy.  From Kansas."  So, Star Trek, Star Trek, Star Wars, Flash Gordon, Buck Rodgers, and even Hitchhiker's Guide to the Galaxy, rejected, in favor of the frequently referenced The Wizard of Oz.  It's a lovely speech, summing up much of what we've come to love about Farscape.

S04E12, Kansas, continues the momentum set up last episode.  Moya follows John through the wormhole and retrieves him, but there's a problem.  It's 1986, and Jack Crichton is supposed to be on the Challenger.  The gang has to keep him from going up, to his doom, while avoiding creating a stir with an early first contact. 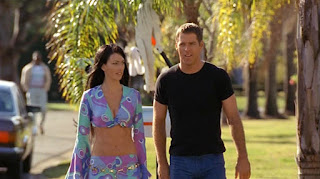 It's light on the geek but heavy on the pop culture.  Of milk, John says it "does a body good," the classic advertising slogan.   Of Aeryn's outfit, he says she "kinda looks like Cher."  When D'Argo wonders why their plans never work, John's response is "Murphy's law."  And when the time schenanigans start to make John fade in and out of reality, he grouses that he's "Casper the freakin' joke."  I also noted that, when Rygel is eating tons of candy, John calls him "Mr. Burroughs."  I'm not sure what the significance of that is.

S04E13, Terra Firma, deals with the team in modern day Earth, and John's reverse culture shock at being home in a post 9/11 world.  His dad seems unrecognizable and he fears what the US government will do with exclusive access to Moya's tech.  I find placing John's homecoming in the middle of a season to be a bold choice.  He's been seeking this for years, but now that he has it, he's not sure he wants it.

It's light on the pop culture, though.  Caroline, John's ex, calls him Buck Rogers, which is cute.  And John does an ET voice and places his finger on his sister's head.  "Don't worry" was the line.

It's a very strong trilogy, expanding the universe and putting our characters in terrifically interesting situations.  John finds Earth, only to have to abandon it.  At least this time, it's a choice.  And now, with that out of the way, John can approach the rest of the season with a lighter burden.
Posted by Jimtron at 10:45 AM