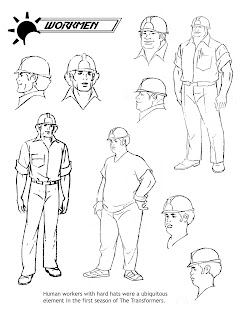 This one is a fun one for me, even though it's kind of generic.  It's the human workers that dot the landscape of season one.  For whatever reason, 90% of humanity in the first season of Transformers were workmen wearing hard hats.  I already had two of them in  Transformers: The Complete Ark

(order it today!) , so here are a few more.  Of course, the first time we meet Spike and Sparkplug they, too, are workmen with hard hats, though their normal models don't show them as such.  That's almost an oversight... battling Decepticons has to be more risky than working on an oil rig.
Posted by Jimtron at 8:34 AM

In short, I have no idea but they do look nice. :3

It's not a mistake, it's just a weird aesthetic.

That and its much cheaper to design. Are their any more workers or generic humans besides these?

Eh? How's it cheaper to design? I don't think any of those were used in more than one episode. :\

If you say so. Actual facial closeups of course their weren't that many, but I remember their being allot of moments in the show with generic hard-hat wearing men. These were obviously intended as stock model-sheets for fill in people.

If I were to assume every worker in the show has it's origins from these sheets, including the other two aforementioned (no way for me to know for certain), then that's allot of moments that Mr. Dery or one of his assistants didn't have to specially customize.

Admittedly I'm assuming these are the only model-sheets created, but who knows. At least that's what I meant when I said it was cheaper.