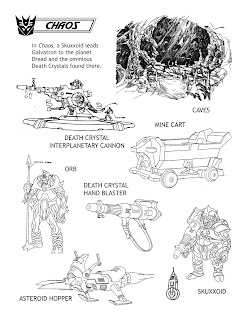 Ahoy, brave readers.  BotCon is now merely days away, so I'll be departing from beautiful sunny LA for... beautiful, sunny Dallas.  If you're in town, say hi to me.  I'll be attending most of the panels and maybe possibly participating in one.  And, at the IDW panel, look for an announcement about my next Transformers project!  Exciting!

But I can't neglect my Addendums, now, can I?  This week, Chaos!  The episode, that is, not pandemonium here on the site.  Chaos is one of just three S3 episodes that I have extensive models for.  Webworld I've already done an eight-part series on, and I'll be doing Madman's Paradise at some point in the future.

Chaos was actually one of the first set of models that came to me after I published the first Ark book.  For those who care about such things, I managed to squeeze a few of the Chaos models into  Transformers: The Complete Ark

(order it today!)  I actually tried to do a whole Skuxxoid page, but the quality of the models were too low and space was too tight.  I got the best Skuxxoid onto the Acknowledgement, along with the monster Chaos himself, a Shrike Bat, and an Ick-Yak. (I really love how Paul Davids added in movie callbacks in this script, giving visualizations to some of the monsters mentioned in an off-hand way in the movie.)  Here are the rest of my models from the episode.  Hope you enjoy them!
Posted by Jimtron at 10:49 AM

I felt sorry for the Skuxxoid when Blast Off skipped right past all attempts to sell him the weapon or the crystals and just stole it from him and intimidated him into telling him the location of the planet Chaos. Those Skuxxoids just can’t catch a break! Or is it always the same one? (Blowing up the Olympic torch, trying to assassinate Octane, finding the anti-electrons.) I assumed “Skuxxoid” is the name of his species since Cyclonus says “Those miserable Skuxxoids!” and Swindle comments they’d sell out to anybody for the right price. (Cyclonus’s reply is funny.)

“Chaos” also makes it seem like an entire EDC base got shot with crystals and crashed on Goo, though when Kup and company arrive to investigate, it doesn’t seem like an entire base, just a ship. In either case, I wonder if that was the Skuxxoid’s doing or Runamuck and Blast Off?