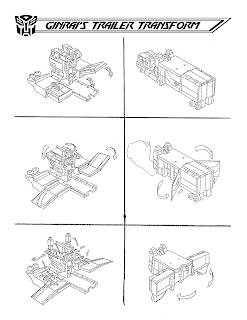 Full disclosure: I don't think this is a particularly interesting model.  It depicts the transformation of Ginrai's trailer into its base mode.  Maybe I find it dull because it's not a character proper.  Maybe It's just that it's really a rather static piece, with no great liberties taken from the toy.  Nevertheless, it was requested, so I figured why not.

Now, the actual Ginrai / Powermaster Optimus Prime toy, on the other hand, is just marvelous.  Ginrai especially, with the retractable fists and metal bits.  As a kid I thought it a bit funny that Prime had a cargo space in his trailer, but nothing to put there.  I would store his head back there, but it seemed like overkill.  I used to try to cram Roller back there too.  I think I could get it to just about fit if I took off all the wheels. 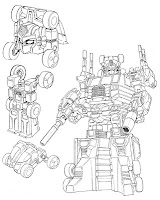 As it turns out, great minds think alike!  How could I know that that trailer space was vestigial? Early on in the design phase, Powermaster Prime was to be a Powermaster AND a Headmaster, with a triple-changing Roller as the head.  It would have been truly glorious.

Godbomber, too, went through some big changes from conception to final execution. (If you don't know, Godbomber is the trailer extension for Ginrai that turns into a robot or an enhancement for Super Ginrai, allowing him to become God Ginrai.) Big differences include spots on his wrist to keep Ginrai's rifles, and a large hand-held cannon instead of a shoulder-mounted missile launcher.  I liked the idea of the wrist-mounted guns so much that I drilled holes in my reissue.

Anyway, a very neat figure, and maybe some day I'll customize up that rifle or even the Roller headmaster.  Don't hold your breath, though, since Joe books are taking up much of my time.  (I came up with a great little eight page block today that lets me use a lot of neat models and have them all feel coherent.) If anyone else out there has done some kitbashing or customizing along this line, chime up and let me know.  Maybe we can do a photo-spread right here.
Posted by Jimtron at 2:08 PM

Your article reminds me that despite uploading that Powermaster Prime image set to the Wiki years ago, I forgot to actually put it on Prime's toy notes. Yet I had it on Roller's. Go figure.

I had heard about the Roller which becomes Optimus's head... but I didn't know he became a robot, too!

I think the wheels might be too big, though... still, pretty neat. someone should make that for the toy.

And I thought I read somewhere that he would have been a Targetmaster, too?