Review: War of the Worlds, the series ep 31 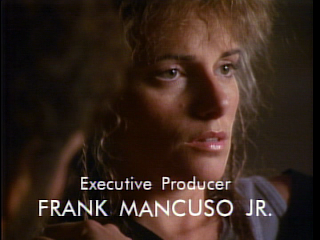 The thirty-first episode of War of the Worlds, the series, is titled Night Moves.  Following its usual formula of parallel story telling, both the aliens and the humans are running low on food.  Suzanne takes Debi to the countryside to live with Rebecca Owen, her mother, Debi's grandmother.  There, they find that the aliens have done the same thing, taking over the farm and using it to incubate alien plants to harvest for food under the guise of working for the Department of Agriculture.  Much alien carnage follows, though sadly Mrs. Owen perishes in the crossfire.  Suzanne and Debi go back to the city, realizing that there's pretty much nowhere to run from the aliens.  The aliens, in turn, find the loss of one farm acceptable; they've got 10 more, with an additional 20 under consideration. 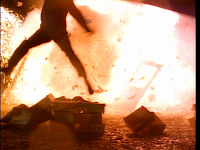 The Good: This is a well paced, well acted, logical adventure with a lot of action.  All around, the quality was quite high.  We even got a nice explosion when Kincaid chucked a grenade at some aliens.

The humans get some good characterization this time out.  When Debi wonders why things always have to change, Kincaid replys that they don't.  It's such a naive view for such a worldly character to take.  He also characterizes her purportedly permenant move as "getting out of here for a while."  He may be tough and world-weary, but he's very immature in some ways.    I also like the drunken brawl that Harrison and John get into in a strip club.  It seems very natural for some healthy male bonding, now that the girls have gone away.

The healthy male bonding through conflict, by the way, is immediately followed up with an ugly physical confrontation between Suzanne and Rebecca, drawing a sharp contrast. Violence is also used well earlier on in the episode, when Debi tackles and then starts kicking a food thief.  The city is certainly making her vicious!  The scene that lead up to Debi's confrontation with the thief was rather fun too, with the barter economy of "Almost Tomorrow" explored.  Harrison wound up trading a pair of boots and a nice knife for some apples. 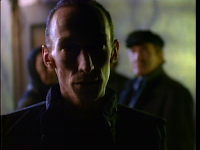 The alien interaction, too, is mostly terrific, though this is no great surprise.  Forest and Disher continue to have delightful tension between them.  I'm thinking in particular of a scene when Malzor asks her when new food will be available, and she dodges the question by talking about her experiments.  He's too shrewd for her, though, picking up on the ploy.  Richings' Ardix, too, gets in a juicy line here or there, especially when he confronts Suzanne's mother.  "Mrs. Owen.  I'm glad you could join us."  It looks so flat in print, but the menace just drips off his tongue!

Well, what appears to be coincidence turns out to be not so much.  Suzanne's family farm being targeted would be a bit much, but if it's just one of eleven...

The Bad: That said, eleven farms, each one of which has some three or four guards, means around 35 aliens devoted to the food-raising operation.  Since it seems like Malzor's forces number, at most, a couple of hundred, this seems like quite a lot. In the aforementioned strip club, we meet a new recurring character; Belinda Metz's Scoggs.  She's a stripper-hacker.  Though I like recurring characters, this seems like pandering to me.  That said, it also seems somewhat ahead of its time in a way, juxtaposing her physical vulnerability and exhibitionism with a big juicy brain.

Paul Fox, the main alien, seems way too human.  He seems to have genuine psychological insight into the relationship between Suzanne and Rebecca, and exhibits none of the alien's characteristic awkwardness.

Alien plants grow awfully quickly!  They seem to have set up the greenhouse and grown a garden in about two days.  More time passing wouldn't have been a bad thing. 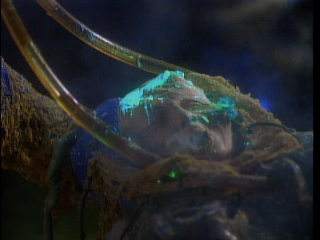 The Ugly: Right at the beginning of the episode, a starving alien made the mistake of ingesting some human food.  He boiled, then popped.  Malzor's reaction to this was fantastic, by the way.  To Mana, he quipped that this saves her the need for an experiment.  Cold, Malzor, very cold!

Overall, a surprisingly strong episode.  Maybe getting out of the city gave the writers a bit more freedom; it certainly feels like a breath of fresh air after the gritty urban stories we've been getting.  It also expands the world, showing that really the countryside isn't much better than the cities.

, will be out on DVD this October and is available for preorder now.
Posted by Jimtron at 10:46 AM

I just saw this one again on the newly released dvd set. I actually enojoyed it even though it was a season 2 episode. The human clones seemed a lot like the aliens from season 1; cold, calculating and uncomfortable around other humans. The dog reacting to John clearly reminded me of the dog reacting to the alien who infiltrated the cottage in season 1. The alien plants were creepy with their strange noises and grabbing vines. No wonder the aliens are tougher than humans, they had to live on a planet where even plant life is dangerous!

I was actually glad to see Suzanne's mom buy it in the end. She should've been dead after spending such a long time in the greenhouse. She just seemed like a continuing nuisance, and her character was not fleshed out well at all.

I agree with the reviewer about Paul Fox however. I mean come on, making out with Suzanne??! An alien? From what information we gathered from the first season, the aliens view humans as fungus. Would one them find it so easy to come into such close contact with fungus? It was totally uncharacteristic of the aliens as a whole, and didn't fit at all with what we know about them.

Paul Fox is probably a flub that ended up becoming more of an unintended item of curiosity for me... why did he behave the way he did?? he seemed to actually have developed some kind of "pet the dog" attachment to Suzanne that went slightly beyond simple deceit. what makes a great contrast to his strangely NON-Morthren behavior is how utterly instantaneously Suzanne turns off all reciprocation once he's revealed (granted, kill one's mum might be a pretty sure fire way of turning them against ya!).

the Morthren's plants were a nice reference to the WOTW film and novel and was appreciated. so, too was the change of locale for filming.

strangely absent is ANY reference to the existence of Suzanne's ex-husband, Debbie's father (then again, maybe i've forgotten a passing reference?). if you're desperate to get Debbie out of the city, why not look up the potentially financially capable reporter who's probably still at least concerned that his daughter is safe from harm...? it seems logical to at least mention in passing dialog WHY Suzanne would write that idea off entirely. it seems he is yet another victim of "forgetting season one."