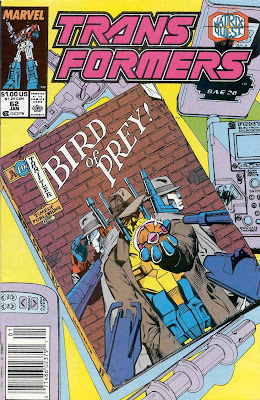 Bird of Prey! is the sixty-second issue of the US G1 Marvel Comics run of Transformers.  The creative line-up is unchanged from the last issue, which helps get some nice creative momentum going.  For the record, that puts Simon Furman in the driver's seat as the writer, with Geoff Senior as the artist, Nel Yomtov as the colorist, and Jim Massara as the letterer.  The cover is by newcomer Rodney Ramos, and marks his only contribution to Transformers.

It's a very clever cover, perfectly suited to the contents within.  Nightbeat, Siren, and Hosehead star in a dimestore detective novel, which lies piled among a bunch of Cybertronian possessions that include keys a microscope, a remote control and more.  It's a clever tonal indicator of what the book's going to be all about.  The Autobot symbol in the logo is also replaced with a new graphical element, proclaiming this to be part 1 of 5 of the Matrix Quest.  The whole thing takes a bit of thought, but it works.  By the way, the book is put out by Timely Publications, a nod to the original name of Marvel Comics, Timely Comics.

The issue itself is a fun detective romp, borrowing liberally from The Maltese Falcon.  It starts out with Nightbeat searching the planet Pz-Zazz for the Matrix, per the last issue.   He's interrogating some well-armed mobsters much bigger than himself, provoking a fight.  They're saved by some mob violence, which dumps a stone bird into Siren's lap.  Nightbeat has found a mystery! It's an exciting alien-centric story, one where we jump in with both feet.  The various Maltese Falcon nods could easily have gotten too derivative, but obvious visual nods like the Humphrey Bogart billboard Senior placed into the second page help ensure the audience that this is a homage, not outright theft. Senior's artwork is a real treat, with slithering critters and ugly mobsters everywhere.  He does a nice job of portraying a run-down seedy alien world, the perfect setting for a hard-boiled detective story.

A brief two-page interlude sets up the reason for all of this; Prime and Xarron are sending out teams to hunt the Matrix, lost to space when Prime's body was loaded into a funeral barge.  It's short, sweet, and to the point, letting us know what's going on and why.  Furman puts in a bit of ominous foreshadowing, when Optimus muses that finding the Matrix might leave them somehow worse off.

Back on Pz-Zazz, Nightbeat is disappointed that his teammates want to focus on the Matrix, to the exclusion of this new mystery, but the arrival of Miss Fatale (heavy handed much?) changes that.  She offers to take them to a sacred, life-giving place in exchange for the bird.  They agree, and do what every D&D player knows you should never do; they split up the party.  Nightbeat goes to retrieve the bird, Hosehead and Siren go with Fatale to find what they presume is the Matrix.  Shadowy figures wonder if they should take out Nightbeat, but decide to instead follow him to see where he leads them.  Ominous.  He grabs the bird and gets into a fight with one of the three big mobs in this city, B'hgdad's boys.Our intrepid hero nearly gets away, but one of the goons gets the drop on him.  All seems lost, until the goon gets shot in the back by a person or persons unknown...

At the top of the pinacle, where the sacred object should be, Hosehead, Siren, and Fatale meet Gutt and his gang, the second mob in the city.  Nightbeat's arrival helps them overcome this obstacle.  He's figured it out; the bird IS the sacred object that everyone is after, not the Matrix.  Fatale tries to convince him to hold on to it, use it for selfish purposes like reviving his deactivated comrades or fighting Unicron, leaving enough for her to live forever.  As tempting as the offer is, Nightbeat replaces the idol and gives Pz-Zazz a second chance.  It's a good ending, warm and bright, helped along by some great coloring.  Nightbeat's sacrifice rings true to the Autobot way. 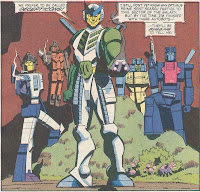 Sadly, for him, the issue isn't quite over yet.  The third major power in the city, the robot mob, blasts our heroes into submission.  They inform Miss Fatale that they prefer the name Decepticons.  Thunderwing, looking awesome, has every confidence that the three captured Autobots will soon tell him all he needs to know about the various search parties scouring this sector of the galaxy.

This is an even better ending, well set up (it was they who saved Nightbeat earlier) and making the next issue all the more intriguing.  We now see that this is not just a stand-alone issue, but legitimately part of a greater narrative thread.  Thunderwing made his debut a few issues earlier, but now he really gets to shine.  He'll only get better as the issues progress.  It's also our first introduction to Nightbeat, Autobot detective.  Nightbeat is a hoot to watch, and Furman will continue to feature him prominently for the rest of the run. 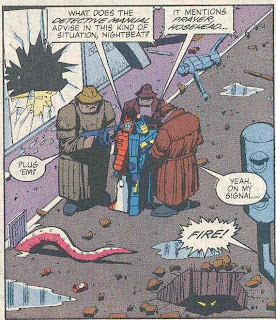 The artwork is perfect for this story.  When I first saw Senior's stuff, I didn't care for it that much, but with more mature tastes I can say that he brings much to the table.  His liberal use of inks create stark, dynamic images. His designs are strange and fluid, while still being very angular.  He's clearly a very talented artist.

Another note: the opening text about what the Transformers are all about has shifted dramatically.  Before, it spoke about the civil war.  Now, it reads "They were the dream--mechanical beings able to transform their bodies into vehicles, machienery and weapons; a last line against the chaos bringer, Unicron! They are at war, heroic Autobot pitted against evil Decepticon, both on their homeworld, the metal planet called Cybertron, and here on our Earth.  They are the galaxy's last hope, they are-- TRANSFORMERS."  Good stuff.  It signals how important the narrative changes introduced recently are going to be.


Next issue: "The matrix quest continues as Backstreet, Override and Dogfight become Kings of the Wild Frontier!"  Sounds like Furman is going to continue to borrow from other genres as this Matrix Quest progresses.  That could be fun, or it could get tiresome.  Looks like we'll have to see which.  This issue kicks off IDW Publishing's  Classic Transformers, Vol. 5

, available for purchase at Amazon.com, and is worth perusing if you haven't already.
Posted by Jimtron at 11:36 AM