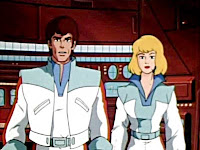 Spike: We're the only ones who can save Planet Sandra. But if we use the energy from Athenia, we'd have to compensate for it on Earth.
Fortress: That's why it's better to ship it straight from Earth.
Arcee: Commander! It's the data on Earth's stockpile. Ultra Magnus' report says the figure at the bottom is the minimum requirement.
Spike: Will this small amount be enough?
Fortress: They must understand our situation.

A call for help from an unknown planet in a parallel universe is received by both the Decepticons and Autobots. The hidden world is critically low on energy and needs assistance.

Galvatron, Scorponok and the Decepticons decide to disregard it, not wanting to get involved in such business, however Galvatron nevertheless dispatches Ratbat to track the Autobots, as he knows they will also have received the plea for help. On Athenia, the message was indeed monitored and Fortress has determined that it originates from a solar system which is exactly parallel to Earth's, planet Sandra occupying a similar position. He discusses with the Headmasters, Arcee, Spike, Carly and Daniel the prospect of sending energy aid to this mysterious planet, but Spike is concerned that their own energy levels are too low.

After double-agent Punch informs Fortress that the Decepticons ignored the SOS, Fortress and Spike agree to send aid from the energy stockpiles on Earth. A rescue party is formed, including Daniel for his first educational trip into outer space. Of course, this activity has been spied by Ratbat and reported back to Galvatron, who feels that all of Earth's energy belongs to only him and thus he immediately heads out to put an end to it. He meets with Sixshot to discuss surveillance on Autobots energy movements in the area.

Following this, we find Ultra Magnus, Twincast, Protectobots and Technobots at the Autobot Earth HQ, loading up the Trainbots with energon cubes, but they are soon attacked by Galvatron, Sixshot, the Terrorcons and Constructicons. There is a great all-out battle that occurs, involving the combiners and Magnus versus Galvatron, while Sixshot effectively brings down the Trainbots. Arcee on Athenia is alerted to this troubling development, confers with Fortress and the rest, who then decide to instead use energy stored on Athenia.

Chromedome: Why are you stopping me? We have to hurry!
Fortress: I have an idea. Athenia's stockpiles are about the same as Earth's.
Spike: Do you want to ship the energy from Athenia?
Fortress: To divert the enemy's attention.
Spike: But then Athenia will have nothing.
Fortress: Galvatron will come in pursuit. Let's move it from Earth to Athenia.
Spike: Good idea. We can rebuild the energy on Athenia.

As the battle still rages on Earth, Galvatron and Sixshot deduce that the Autbots will send energy aid from Athenia instead. Galvatron decides to dispatch Scorponok, noting that occasions like these are why they have him. Scorponok does indeed intercept Battleship Maximus on its way to Planet Sandra, initiating a fierce conflict in space. During the fray, Chromedome and Hardhead transform to vehicle mode but their small robot forms sneak away to the spacecraft carrying the energy aid. Spike, Daniel and Wheelie are already aboard and together they careen through a dimensional rift to enter the parallel universe where Sandra exists. They make contact with the inhabitants and prepare to land.

On Sandra, Spike, Daniel and the Autobots, expecting a planet very similar to Earth, are surprised to find it an almost barren wasteland. In meeting with the administrators, they learn that Sandra once had a thriving culture but the inhabitants used the planet's resources indiscriminately and wastefully. Spike sorrowfully notes that Earth could face the same desolation if humanity is not careful and wise in its use of energy resources. The people of Sandra announce that they have researched new forms of energy and will be ready in seven years to utilize them, which is why they need outside aid to achieve this goal.

Suddenly, they all spy Battleship Maximus in sky, having passed through the dimensional rift, yet it is being pursued by Scorponok. They engage in combat as Galvatron also joins in, battling Brainstorm and Highbrow. Hardhead and Chromedome decide for the moment to stay in their tiny robot forms in order to discreetly plant bombs on Scorponok. He soon erupts in flames, forcing a retreat by him and Galvatron. Soon after, the Autobots agree to assist the inhabitants of Sandra in their research for new energy resources.

This episode I found exciting and fast moving, as it opens with the mysterious SOS, the discovery of the parallel solar system, the battle on Earth which then forces a change of tactics for helping the planet Sandra and finally the sobering glimpse of a possible devastating future for Earth. The animation is solid throughout, especially during the Earth-based scenes, where we get combiner clashes and a killer fight between Magnus and Galvatron, their first since US G1 season three. Spike gets a juicy dramatic scene when he openly disagrees with Fortress. He may be the Autobots' long-time and most fervent human ally, but he certainly is not just a "yes-man", nodding politely at whatever is decided. In this episode and the one that follows, he shows courage in both stating his differing opinion to his friends and going toe to toe with Galvatron.

And speaking of Galvatron, this is first episode following his return where we see back in command of the Decepticons. Scorponok offers his opinion early on, but otherwise fills the role of giant foot-soldier. Again, it's anyone's guess why the writers decided to bring back Galvatron for a short stint and sideline Scorponok, but I actually don't mind so much, still being a fan of seeing the crazy guy mix it up!
Posted by Brian at 2:37 PM