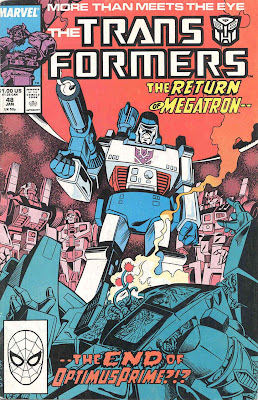 The Flames of Boltax! is the forty-eighth issue of the US G1 Marvel comics run of Transformers, and the issue that I've taken the name of this blog from. It was written by Bob Budiansky, drawn by José Delbo, inked by Danny Bulandi, lettered by Bill Oakley and colored by Nel Yomtov. The cover is also by Delbo.

The cover is intriguing. Megatron stands over a badly injured Optimus Prime with a smoking fusion cannon on his arm.  What could this portend? He's got the Triggercons behind him, though the block coloring ensures that he remains to focus.  "The RETURN of MEGATRON -- --- the END of Optimus Prime?!?" it remarks, which is a tad misleading based on what's actually in the issue.  Still, it's a powerful image, and it is technically supported by the story inside, so I'll go ahead and say that this cover is very strong.

The issue itself is a bit more mixed. It opens with a nicely bizarre alien scene.  Buster runs through a mechanical jungle, complete with plants shooting at him.  Delbo clearly got to let his imagination run wild, and he has fun with it. When one of the plants shoots him square in the chest, he wonders how he can still be here. It turns out, it's Realvision, a hologram. Ratbat is about to watch the contents of the Autobot Cassettes and needed to test out the tech. Buster is sent away before it starts, though Starscream successfully argues to watch the tapes alongside his leader.  Ratbat is clearly distasteful of the prospect, which prompts one to wonder why exactly Starscream is his second in command. Perhaps the newly revived troops liberated from the Ark back in issue 41 feel more comfortable with a known quantity like Starscream.

The show starts, and Delbo's art again carries the day. We get to see a beautiful Cybertronian landscape, which is soon interrupted by the site of an Autobot patrol lead by ... Optimus Prime. A much younger Optimus Prime, with a Cybertronian alternate mode. I rather like this one more than the combat tank we saw for Optimus back in issue #1. This feels a lot more true to the character. Optimus is going to see Boltax, the High Circuitmaster of the greatest database on Cybertron. This is wrong on a number of levels; Boltax is a neutral, and thus off-limits to both sides by mutual agreement. Not only that, but Optimus' actions are putting Boltax and his, ahem, disciples, in danger. He's also endangering his men, the Triggerbots, as the disciples have boobytrapped the surrounding landscape. We get to see each Triggerbot, in turn, show off their prowess against such obstacles as molten mercury mines, a jungle of cables, and collapsing panels above pit traps. Watching the Autobots is none other than Megatron! Do you see where this is going?

Meanwhile, Buster has decided that he needs to see what's on the tapes too, and manages to slip his cell. He overcomes some obstacles of his own to watch the proceedings. Of course, if it was that easy to escape, one wonders why he waited till now, though perhaps security is more lax now that there aren't other humans around.

Starscream and Ratbat continue to watch the show, though Starscream can't seem to refrain from yelling at the screen, so to speak. I certainly wouldn't want to watch a movie with him. "He's behind you, you fool!" Megatron and the Triggercons observe Optimus get past all the defenses, then ignore the warnings of the disciples of Boltax. They promise only termination to those who proceed, which Optimus' men take as a threat but Optimus realizes is merely a warning. He lets his men camp while he proceeds forward. After the Autobots make themselves scarce, Megatron blasts his way past the disciples rather savagely.

Optimus enters the mountain of Boltax, who explains that greater than the database within every Transformer is something more fundamental; the collection of knowledge that underlies all databases. This Underbase is what Optimus seeks, and Boltax allows him to bath in its light. In what is amusingly several levels of voyeurism, Buster watches Starscream and Ratbat watch Megatron watch Optimus. Megatron, true to form, simply blasts what he thinks is Boltax before walking in on Optimus. Optimus explains that the entire mountain IS Boltax, and what was blasted was just a puppet. Optimus claims that there is too much knowledge in the Underbase for any one Transformer to possess; doing so leads only to madness and death. He begs Megatron not to take the Underbase for himself. Predictably, Optimus gets a face full of blaster for his efforts.  As Megatron gloats, Optimus crawls off and debates the merits of destroying the Underbase versus allowing Megatron to keep it. He decides to destroy it, and closes the vents for the flames of Boltax. The energy overloads, prompting the Underbase to shoot out into space. Megatron vows that its power will one day be his, and Optimus bemoans causing Cybertron's greatest treasure to be lost to the ages.

The tapes are over, and Starscream fails to see the value. However, Ratbat quickly realizes that existence of the Underbase has just moved from legend to fact. Moreover, Soundwave has calculated the trajectory of the Underbase; it'll be entering the sol system in less than a week! Ratbat is determined to capture it for himself, though Starscream has other plans. Buster seeks a way to warn the Autobots, but gets discovered. Ratbat muses that he may have seen enough to hear Optimus' warning; too much knowledge leads to madness and even death. 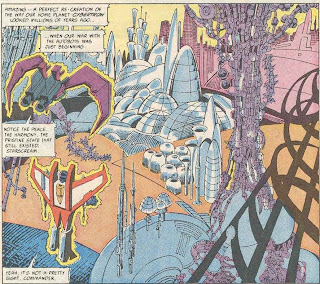 For an issue that's mostly set millions of years in the past, it actually works pretty well. We end on a cliffhanger, wondering about the fate of Buster Witwicky, we got to see a bit of the old Optimus/Megatron rivalry, and we learn what the Underbase Saga is really all about. The artwork helps a lot; Delbo really seems to be in his element here.  His alien landscapes are gorgeous, and help to keep the issue more entertaining than it could have been. I find myself looking forward to the rest of the Underbase Saga, much more that I was after the first issue.

Next month, Decepticon battles Decepticon in the frozen Arctic in an all-out "Cold War!" Sounds intriguing! The Flames of Boltax! is contained in IDW's Classic Transformers Volume 4

, available from Amazon.com.
Posted by Jimtron at 4:33 PM

Ive noticed this comic echoes the first of the modern movies, where Prime fires both the UnderBase/Allspark into deep space so Megatron doesnt get his hands on it, the Decepticons then search it out which leads them to earth! Also note that they are both cube shaped. Perhaps this issue was used as a template for the concept of the All Spark.