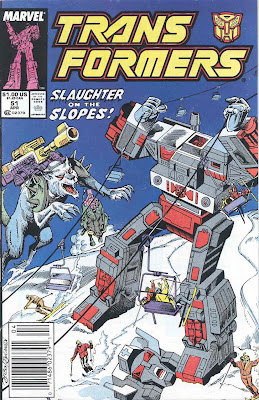 The Man in the Machine! is the fifty-first issue of the US G1 Marvel comics run of Transformers.  The creative line-up is mostly consistent from the last issue; Budiansky wrote the issue, Delbo drew it, Hunt inked it and Yomtov colored it.  Bill Oakley replaces Rick Parker as letterer. José Delbo drew the cover.

I find the cover to be fairly disappointing.  A headless Fortress Maximus holds up the cables to a ski lift, while Pretender Beasts menace him and his head lies in the snow.  Skiers are avoiding him, though they generally don't look particularly panicked.  "Slaughter on the Slopes!" we're promised.  It's fairly lackluster. One interesting detail is that the traditional logo that's graced the comics for the past four years has been replaced with the more futuristic 1989 logo.

The issue opens on an otherworldly scene, with Spike Witwicky menaced by various mechanical implements.  A voice tells him not to resist, that there is no escape, but Spike can't accept that. As he falls towards an abyss, he manages to snag a cable. He pulls himself to freedom, just as he wakes up. It was all a dream, one caused by the proximity of his Headmaster helmet.  We learn that, in the aftermath of the Underbase saga, Buster and Spike have returned home to Sparkplug.  Spike has quit the Autobots, having achieved his objective. Optimus Prime is sorry to see him go, especially with the Autobot ranks as thinned as they are. It's a very welcome, very human development. After all, why WOULD Spike stay with the Autobots? I can completely accept that he'd not want anything more to do with them, after what he's endured.

Spike has no time for breakfast or family, this day, because he's got a ski trip with a friend. He also has an errend to run; disposing of his helmet, which is too much a reminder of his past life for him to keep.  He chucks it into a junkyard and drives off. It won't remain lost for long, though, a pair of Decepticons comes along shortly, hunting for the human bonded to Fortress Maximus. Scorponok has somehow learned that Fortress Maximus has quit the Autobots, and is taking advantage of the opportunity to eliminate (or at least wound) his old rival. Budiansky introduces the beasts a bit gradually, starting with some growling, followed by a lovely shot of them in shadows, and only then revealing their full glory. They find the helmet, and catch the scent of Spike's car.  Off they bound. This development, too, seems eminently sensible. Scorponok is a shrewd customer, and I like that he's moving against an isolated Autobot like this.  Whether Spike likes it or not, he's a potential threat to the Decepticons, and Scorponok treats him as such. 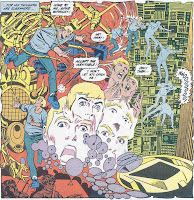 Hundreds of miles away, Spike picks up his klutzy friend Cliff.  Cliff shares some rather heavy-handed advice about learning to accept who he really is. At first, I wondered if this might be an oblique reference to sexuality, though it turns out that he's talking about wearing glasses. Yawn. Spike's not much interested one way or the other.  When he nods off in the car, he's treated to another lovely Delbo dreamscape. This time, the abyss that he plunges towards looks oddly familiar ... I love the wobbly panel borders here. Alien and surreal architecture really plays to José Delbo's strengths.

In the Sierra Nevada mountains of California, Cliff and Spike enjoy some snow. Sadly for our heroes, the Decepticons aren't far behind them at this point.  Soon we're engaged in an extended chase sequence down the mountain. When Spike realizes that it's scent that his pursuers are after, he and Cliff chuck their jackets down the mountain and buy themselves some time. They find a cave and make some fire to keep warm. Spike bemoans the loss of his helmet, and with it the ability to summon Fortress Maximus. Cliff makes the leap that Spike's dream isn't about escaping Decepticons, it's about escaping his former self.  Spike goes into another dream, but this time enters the abyss, the mouth of Fortress Maximus. There, he accepts who he is and, incredibly, summons Fort Max. Oddly, Fort Max looks like he merely steps out of the Ark and plummets down to Earth, and ability that he hasn't demonstrated before or since in this continuity. That part is a bit glossed over, though. Details like that aside, the emotional weight of the story feels right. Running from yourself is never a good idea, as Spike has come to learn.

All that's left is the big fight. With Carnivac and Snarler at their gates, Cliff and Spike zoom off again. Cliff wants to head for the trees, but Spike directs them off a precipice ... into the waiting arms of Fortress Maximus. Even with his newfound connection to the Autobot, Fort Max is clumsy, allowing the Decepticons to bat him around a bit. Spike and Cliff manage to get the helmet back from Snarler, who has it nestled on one of his tusks. With the helmet, he swiftly commands Max to release the rest of his armor. After combining, the Cons are promptly driven off, never to be seen again in the US. (Though, of course, Carnivac would become one of the most important characters in the latter days of the UK.) Cliff promises to keep Spike's secret, but does ask him where he REALLY was during his semester off from college.

Despite a somewhat wobbly cover and an unappealing promo last month, this is a surprisingly strong issue. In some ways, it serves as an epilogue for both the Underbase saga, and the Fortress Maximus / Buster / Spike storyarc.  It'll be the last thing Budiansky writes about either and it's a satisfying way to end things.  It's a very small, intimate tale, and perhaps more importantly it feels completely organic to what had gone before. Furman would later pick up on some of the themes introduced here and use them in his penultimate issue of the G1 comics.

Next month, "They're mean, they're nasty ... and they're hungry ~~ THE MECANNIBALS!" Hmmm ... it sounds like a very Budiansky idea.  I'm willing to give it a go. The Man in the Machine! is included in IDW's  Classic Transformers Volume 4

I like that Delbo keeps track of continuity. The car Spike and Cliff are driving is the same car/model (a 1986 Toyota MR2, I believe) that he drove in issue # 38. Nice little details like that I can always appreciate.

I was also glad to see Seaspray this issue. That made it clear to me there were at least some 1985 bots left :)

As for the logo change, that was to be expected, but I do wonder what Marvel was thinking keeping the Autobot insignia of the former logo. It really looks out of place standing straight up while the rest of the logo was tilted. I think it would have been better to follow the example of the toy boxes (as Marvel UK did, I think) and drop the insignia completely.

I'm confused at the end; Budiansky isn't done yet...

"In some ways, it serves as an epilogue for both the Underbase saga, and the Fortress Maximus / Buster / Spike storyarc. It'll be the last thing Budiansky writes about either and it's a satisfying way to end things." Budiansky has four more issues, but this one ties up the Underbase saga and, especially, his Buster/Spike story.

I just realized something else that bugs me about Furman's run. Here we see Spike clearly accept that he's still part of Fortress Maximus. I would have assumed he rejoined the Autobots, or still kept in touch. Yet, when Furman starts using him, both times (his G.I. Joe/G2 appearance) it's the same theme as this story. He doesn't want to be Fortress Maximus and yet has to be because he is. What was the point?