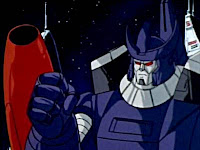 The first episode following the expansive three-part season opener function both as a stand-alone, "threat of the week" story and also as another link in the more serialized structure of this series. The specific bit of continuity which carries through here concerns the demise during battle of both Soundwave and Blaster, as seen in "The Mystery of Planet Master". So without this being labeled as part four of an ongoing story arc, it nevertheless plays such a role, akin to unofficial season three episodes "The Big Broadcast of 2005" and "The Quintesson Journal".

The episode begins with detailed schematics of Soundwave, a revisit of the fatal fight between he and Blaster as well as seeing Ratbat, Laserbeak and Buzzsaw fly away carrying the charred pieces of their commander. We see a new body constructed, informed by the narrator that this is due to the technological skill of Zarak, leader of the Decepticon Headmasters, who obviously learned by building Transtectors on Planet Master, same as the Autobot Headmasters. Soundwave's head is lowered onto his new body and he is rechristened as Soundblaster, much to the delight of his cassette team. His first words as he descends from his CR chamber and towards them are "Sorry to have kept you waiting" – what a dry wit and it's a small, surprisingly sincere moment presented between these fellow Decepticons.

The story proper begins with Galvatron informing Soundblaster that he went through the trouble of reviving him (if only Soundblaster knew the outrage Galvatron displayed upon watching his loyal officer perish!) so that he might help deploy the newly-invented Madmachine. We are not told of its purpose, but it does fall in line with other one-off threats displayed as far back as the days of Megatron, such as the solar needle in "Changing Gears" or electro-cells in "Traitor", so keep that in mind. We next join Sixshot, still the commander of Decepticons on Earth, using Trypticon to attack an oil refinery. Ultra Magnus and Jazz deploy Metroplex to stop him and another brawl between these two behemoths is shown. Suddenly the Madmachine, looking not unlike a blood-red beetle with long antenna, burrows up from underground and fires on Metroplex. I love Ultra Magnus's casual "What the Hell?" statement when he first spies the device! It immobilizes Metroplex completely, but this has expended all its energy. Galvatron considers this a successful first test and orders Sixshot to withdraw, revealing that he will increase Madmachine's power, which disrupts computer circuitry, and use it to control Vector Sigma.

Rodimus and his team deduce this plan with Chromedome insisting that they must attack Charr directly. Rodimus instead advises gathering information first on weaknesses in the Madmachine and so enlists Blaster's cassette force, who are still despondent after his demise. In fact, they refuse to Rodimus in this mission, explaining that they have no confidence in their abilities anymore. Chromedome expresses anger at this, Daniel defends them and soon Rodimus tries to console them all. He reveals that Blaster will soon be revived, thanks for the technological skill of Fortress, mirroring the skills of Zarak. Blaster is reborn as Twincast and immediately put to work (what, no welcome back party?), while the Headmasters are sent to Cybertron to protect Vector Sigma.

In the following sequence, Twincast enlists the help of Springer (yes, Springer makes an appearance!) to help him infiltrate Trypticon on Earth. There is a battle involved the triple-changers on both sides, the Combaticons and Arielbots, Bruticus and Superion. Twincast and his cassettes sneak into Trypticon, but as this occurs the Madmachine is transported to Cybertron, escorted by Weirdwolf and his team. Of course they encounter Chromedome, his Headmasters and the Throttlebots. Meanwhile, back on Earth, Twincast discovers that Madmachine is being controlled by Soundblaster on Charr. He informs Rodimus and immediately races to the Decepticon space bridge, which looks to be in the same dried up river bed from way back in first season episodes. He quickly dispenses with the Constructicons guarding the location, transports himself to Charr and fights his way through Decepticon HQ. In a move that is simultaneously brazen and asinine, Twincast surprises Soundblaster, Galvatron and Cyclonus and effortlessly blasts the controller in Soundblaster's chest. He then waves farewell and happily exclaims, "That's all for now, folks!"

On Cybertron, the Autobots, who had been pinned down, now find the Madmachine out of control and easy to destroy. There is then a happy reunion of all Autobots, with Twincast reminding Daniel not to call him Blaster anymore. I remember when I first watched this episode how much it did remind of those aforementioned season two episodes, when Megatron would roll out a threatening weapon or energy gathering device, soon disabled by the Autobots. These stand-alone can still be great fun to watch, although the ease with which Twincast infiltrates Charr and destroys the device controlling Madmachine is pretty unbelievable. Essentially, the writers knew they were resurrecting Soundwave and Blaster, which is the only integral aspect of this episode, but didn't bother to add much to the episode's overall threat. Time is of course spent on the reintroduction of those two well-loved characters, leaving less time for plot. There is still some good action, Soundblaster and Twincast both display their own unique sense of humor, one dry, one effusive and Galvatron is surprisingly still bent on controlling Vector Sigma.

And yes, although Zarak was mentioned earlier in the episode, the viewer has so far only heard such references and has not yet actually seen or heard from this character directly, only Weirdwolf and his gang. The mystery surrounding is slowly and successfully revealed over the course of first third of the series. Next up, in "Rebellion On Planet Beast", we will see further aspects of his grand plan…
Posted by Brian at 7:21 PM

I'm really enjoying reading these so far. I've had copies of these episodes on tape for years and years, but I've never understood Japanese (and I only have a handful of the English-language dubbed episodes) so I wasn't able to fully appreciate what was happening. This is good stuff!

Just a little FYI... tfcog recently dubbed this episode into English: it is available at tfcog.com