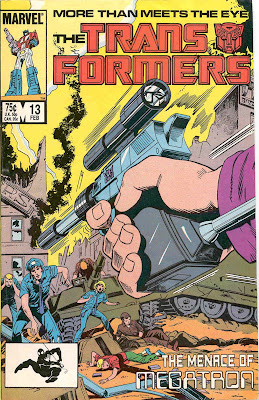 Shooting Star! is the thirteenth issue in the Marvel US G1 Transformers series. As usual, it was written by Bob Budiansky. This issue was penciled by Don Perlin, inked by Al Gordon, lettered by Janice Chiang and colored by Nel Yomtov. Perlin also did the cover.

All told, it's a pretty decent cover, true to the spirit of the book while also a dynamic image in its own right. Megatron is clutched in a human hand, presumably belonging to Joey Slick. He's thrust forward, aimed at some tanks and some police officers who are staggering about. Black smoke bellows forth from the silencer. 'THE MENACE OF MEGATRON", the cover states, and Megatron is written in a computery font. It's a pretty good teaser image, gives a sense of action. Perlin decided to go with the fully decked-out version of Megatron's gun mode for the cover, which was a better choice. It lets him have the glass in the scope be cracked and allows Megatron to go off the page. In the interior, Megatron is merely the pistol, without silencer, stock or scope. One missed opportunity was the Autobot symbol in the logo. Since no Autobots appear in this issue (except for Ratchet, in flashback), a 'Con symbol would have worked better.

Once inside, we're treated to the offbeat tale that last month promised us and this month reiterates. It seems like Bob (or his editor) knew that this was so different that what went before, and wanted to set audience expectations appropriately. We start on the title page, with Joey Slick running through a ditch while two goons are shooting at him. Our sympathies are firmly on his side, right from the first page. As far as Transformers splash pages go, there are better ones, but this is quite appropriate for such a human story.

Immediately on the next page, he trips over an oddly colored rat and lands face down with a "PLISH" (nice lettering by Chiang, as always). This allows the goons to corner him and express their intentions - Joey must die, since he's absconded with mob boss Jake Lomax's money. They (literally) kick him around a bit, but this proves to be a mistake. Under some shallow water, he spots a gun: Megatron. As they get ready to shoot him, he swings it around and pulls the trigger! 'Clik", nothing. The goons look suitably shaken for a panel, as they weren't expecting Slick to fight back. When it's evident that the gun is a dud, they exchange some nervous laughter. One of them even tells the gun to blast them . . . which it does, much to everyone's surprise. Joey notes that he didn't even pull the trigger, but runs off from the injured men.

Slick eventually finds a barn and asks the gun what it is. It reveals itself to be Megatron, and gives some brief exposition about the series, and his battle with Ratchet in issue #8. Alas, Megatron's higher brain functions have been disconnected, so he's quite obedient. This gives Slick some ideas.

Lomax, meanwhile, is furious that his improbably-still-alive thugs have failed, and sends them after Slick again, this time with some extra help. Slick has hitched a ride back to his home neighborhood, where he is apparently beloved. An Asian grocer, some multi-racial kids and his hispanic landlady are all glad to see him back. It's a sequence that feels a bit dated, but it's clear that Budiansky is trying to show that Slick is not only accepted by those around him, but a somewhat multi-cultural fellow. Once inside his dumpy studio apartment, he wallows in his despair for a moment until he hears footsteps coming up the stairs. A quick glance outside confirms that someone who doesn't belong is here. He quickly flees up to the rooftop, but Lomax's men aren't far behind. Desperately, he orders Megatron to knock them out, which the insensate Decepticon does. Joey gets a nice boost of confidence from this.

Not so much confidence that he wants to face Lomax again, though. Slick heads out of town, but realizes that he doesn't have even enough cash for a fleabag hotel. Still blaming Lomax for his trouble, he decides to use the gun to do something about his finances. He robs a convenience store without having to fire a shot, though he does have to stop some police cars who come after him. When he blows up an overpass to stop some cops, he seems to fully grasp exactly what Megatron can do. 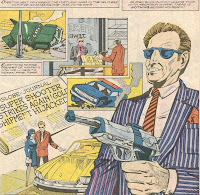 Thus begins Joey Slick's stardom. Using his super gun, he robs banks, jewelery stores, gold shipments and presumably more. He decks himself out with fancy clothes (80s style!) and fast cars. Even the national guard can't stop him, as he effortlessly blasts through soldiers and tanks. All this makes Lomax furious. Apparently every west coast gang boss is laughing at Lomax because this guy is still walking around. That doesn't' quite track, to my mind.

Joey, meanwhile, is getting tired of the parasites who are leaching off of him. He's got his own gang now, though he's really the one doing all the work. Craving someone to talk to, he commands Megatron to transform and has a heart-to-spark with the mindless automaton. He feels that all of his success is empty, so he tries to go backwards. You can't go back home, though. His grocer friend, Mr. Kim, is terrified of him, while the neighborhood kids all want to be bank robbers now.

Realizing that this all started with Mr. Lomax, Slick decides that that's where it will end. He drives to the Lomax mansion and announces himself, saying that he's here to discuss some business. Lomax sends his goons out again, and Slick effortlessly deals with them a third time. Lomax begs Joey for his life, prompting Slick to toss the gun aside. Thus, mano-a-mano, Joey decks Lomax and pays him back the money he owes the mob boss, $600.

However, Megatron looms large. The impact of tossing him aside reconnected his higher brain functions, and he's none too thrilled with his status as Joey's tool. Joey, though, accepts his fate. Lomax was his nightmare, and he faced him down. Megatron's vengeance won't change that. Megatron finds this mix of courage and fatalism appealing, and decides that Slick is deserving of life. Off he tromps, a war to win! Slick is pleasantly surprised to be alive. Police, responding to reports of a wrecked mansion, apprehend him, and he seems happy to go along with it. When asked about the departing Decepticon, Joey informs them that it used to be his, but it just wasn't his style.

This is one of the least-Transformery tales in the G1 Marvel run. Surprisingly, it works pretty well. I actually cared about Joey and his plight, far more than I cared about Megatron in this issue. Even Joey's sanguine acceptance of his arrest at the end seemed like a happy ending. He's not a loser, because he faced his fears unaided and came out ahead.

Perlin's art got the job done well. Joey, in particular, goes from shlumpy to slick (lowercase s) very nicely over the course of the story, while remaining recognizably the same character; same crooked nose, same high forehead. Gordon's inks are likewise servicable, though I though he did a very nice job on the panel of Megatron crouching. Chiang's letters, as always, subtly enhance the story.

A quick word on the title. Bob seems to be having some fun here with the double meaning. Certainly, the rise and fall of the super gangster Joey Slick would qualify him in the idiomatic use of the term 'shooting star'. But consider, clearly Joey is the star of both the book and, for a brief while, the media and his old neighborhood. And he does it with his magic gun, that shoots . . . get it, a shooting star?

After this unconventional little tale, the teaser asks us "what happens when the biggest rock star in the world meets the biggest robots in the world? Find out in -- Rock and Roll-out!" It's a not-particularly enticing pun for next week. Fictional rock stars in comics don't seem like a huge dramatic potential. Especially after a story that breaks format like this one, a more conventional teaser might done a better job.

Overall, a good story. Unusual, compelling, a nice breather from the 12 issues of non-stop machinations. It didn't have to be a Transformers story, but I'm glad that it was. Shooting Star! is available from IDW Publishing in this anthology: Classic Transformers Volume 1 (Transformers)

Take a shot every time you see off-model Megatron. :)

I have a very vivid recollection of the first time I saw this issue of the comic. My mom had taken me shopping at the mall, and when we stepped into a clothing shop I went back to their little kids' corner spotted it amongst all the coloring books and things. (I was not a fan of the comic as a young kid. The story premises were just so goofy.)

I see a face in the scope on the cover, I never thought it was cracks but figured it was a subtle way to show a small bit of Megatron's face. You spelled the word studio when describing the apartment. Great review once again.

This was my very first issue ever of the TF comic when I was a kid. And at the time, I really didn't care for it. It came in one of those grocery 3-packs with the following issue, and one other, and they just didn't hook me. It wasn't until I saw the Headmasters series advertised on TV and my dad brought me the first part of the Scraplets two-parter by mistake instead that I was hooked.

But later on, I did come to appreciate this story in the grander scheme of things.

Zob> Megatron did turn into a human-sized gun on a couple of occasions in the cartoon.

It wasn't a bad stand alone story, something that I imagine became more difficult to do as the roster expanded.

I definitely remember Megatron being actual size at least one time in the cartoon (Day of the Machines), but with all the mass shifting that went on I can understand the confusion.

I never considered that the scope might be showing the corner of Megatron's face before, but now that I look at it, I totally see it. Good call!

I always liked this Megatron - the one that had respect for a human that stood up to him. It seemed way more honorable than how he was made out in the cartoon, which makes him better villain.

Awesome. I never noticed Megs' face in the scope before. I always thought it looked like stickman diving to the left.