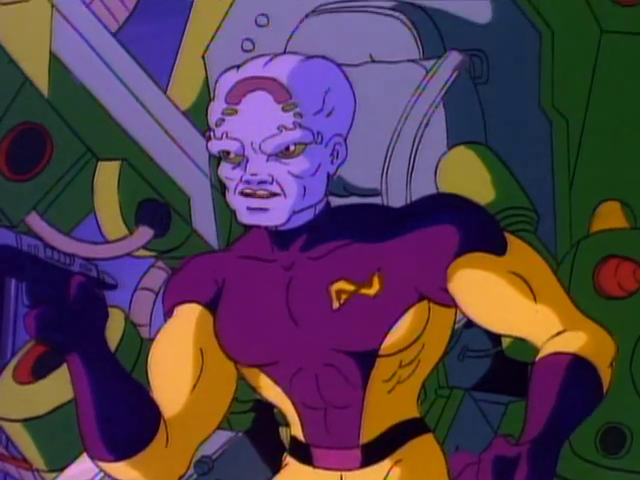 "Neo sapiens were an improvement upon mankind. Neo megas are man perfected. We are new force in the universe."

The Last Man is the twentieth episode of Exo-Squad. Occuring at approximately the same time as Mind Set, it introduces Charlie-Five Platoon, the Jump Troopers under the command of Captain Avery Butler. He, Captain Colleen O'Reilly, Sergeant Ramon Longfeather, and Corporal Vince Pellegrino are the representative members, though many other members (each with their own unique suit of armor) are present. They attempt a diversionary thrust at Ceres, a seemingly unimportant Neo outpost, only to suffer massive casualties in a seemingly too-elaborate trap. The reason for this is the presence of a very special Neo brood center, creating the next step in Neo Sapien evolution, the Neo Megas. Standing slightly smaller than their Neo Sapien cousins, these three-fingered Neo Megas are more intelligent than normal Neo Sapiens and capable of creative thought. One is captured during the battle and fakes his own death, though he perishes while attempting to escape the withdrawing Exo-Fleet forces.

What works: The (re)introduction of the Jump Troopers works well. While it would have been really nice to see some hints of these guys in early S1, it's good to see another side of the fleet than the fighter pilots. These guys, the boots-on-the-ground forces, come across as tough, capable, and a little more serious than the members of Able Squad. That's probably fair for infantry versus the air support, though in the 22nd century environment there has obviously been considerable blurring of the lines between the two roles. It's nice that we get different armor not just for our four main characters, but for all of the different members. 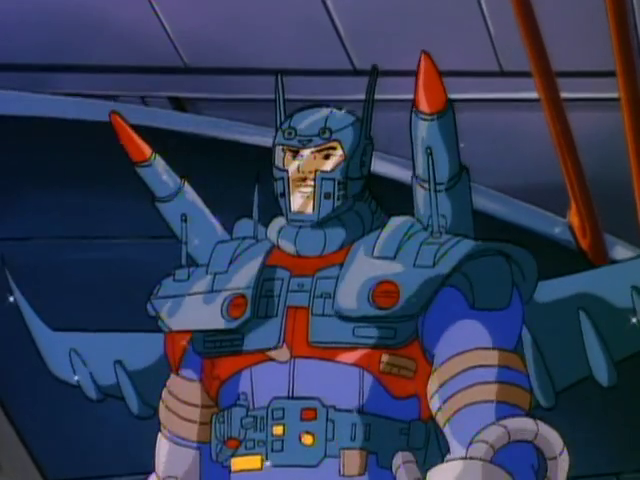 Since this episode almost serves as a new pilot, let's look at who we've got:

Captain Butler is probably the weakest new character. He suffers a bit from leader-itus. He comes across as no-nonsense, competent... and that's about it. We never really see his human side. I do like that he starts off his missions with the rallying cry, "any heroes on board?" "No, sir!" "Good! The only heroes I ever saw weren't breathing." That's probably the best bit of insight into him as a man that we see.

Lieutenant O'Reilly easily gets the most characterization of any jump trooper. Her main contribution is her realization that the Neos have cracked the jump-comm system, and so she'd devised her own. She plays well with Weston, the other techie chick in the series, and indeed we've seen them working together in O'Reilly's first cameo back on the GRAF shield. It's clear that the writers enjoy her, we'll see quite a bit more of her in the future. 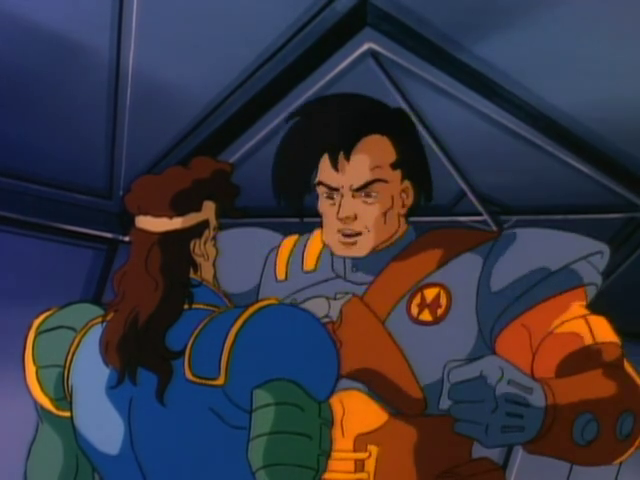 Sergeant Longfeather barely registers as a character. If he didn't get an action figure, I don't think I'd have noticed him in this episode at all. He gets quite a few lines and even breaks up a fight between Pelligrino and Bronsky, but somehow barely gets a chance to shine. I do like that the guy is a freaking mountain, though. His best characterization was probably his arm-wrestling after the battle, though even then O'Reilly steals the show. 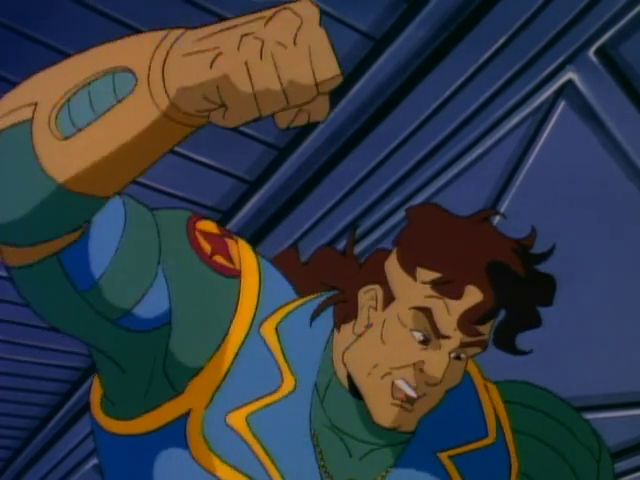 Corporal Pelligrino gets strong characterization as well. His big thing is his rivalry with the e-frame pilots. Again, this is the kind of thing Exo-Squad does exceedingly well. Even among good guys, there's tension and conflict. (Bad guys, too, have rivalry, but that doesn't feel quite as innovative.)  I love Bronsky's quick, savage punch when pushed too far, and that Pelligrino quickly gains the upper hand. I wouldn't go hand-to-hand with a jump trooper if I was an e-frame jock.

The other big thing this episode introduces is the Neo Megas. Having established a new status quo with the end of the Pirate Alliance plotline, the writers are quick to shake things up. It makes sense that the Neos would attempt to close the creativity gap they have with terrans, and that they'd turn to genetics to do so. The two Neo Megas we see in this episode are smarmy, brilliant, and immediately make you want to strangle them. Well done. 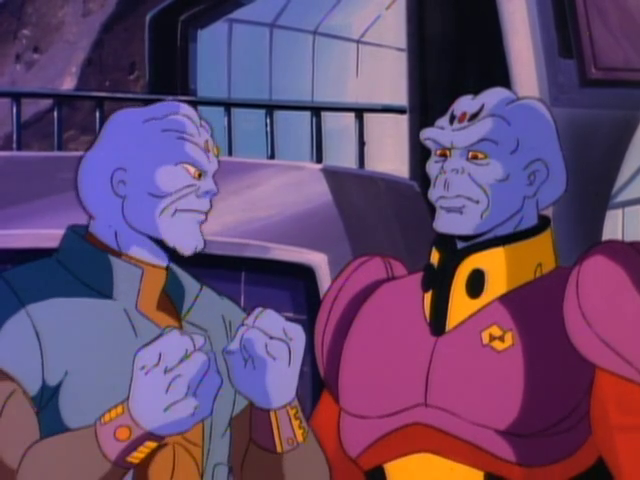 We also continue the tradition of Neo Sapien generals dressing in their own unique style. We meet General Drusus, who makes the monumental blunder of using the Neo Megas as front-line combat troops. He'll pay for that.

Drusus has a brief argument with the as-yet-unnamed Praetorius, the Neo Sapien genetics minister. He's one of my favorite minor characters, so it's nice to see him here. 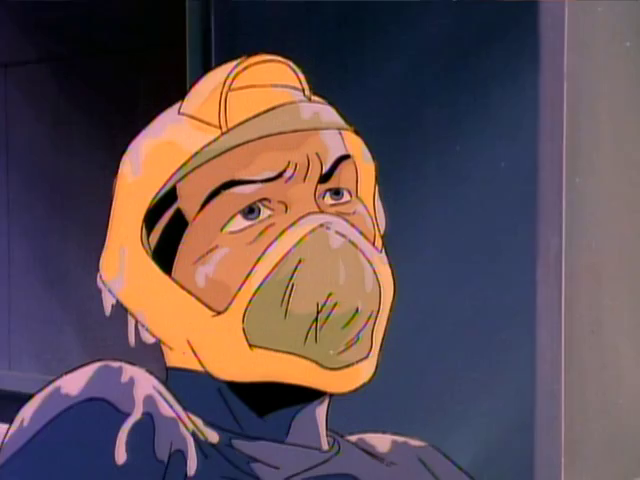 The Neo Mega's murder of the Med Tech is some delightfully creepy imagery.

DeLeon macking on O'Reilly was a nice bit of characterization for him. We've seen him flirt with Weston before, maybe he's got a thing for brainy ladies. 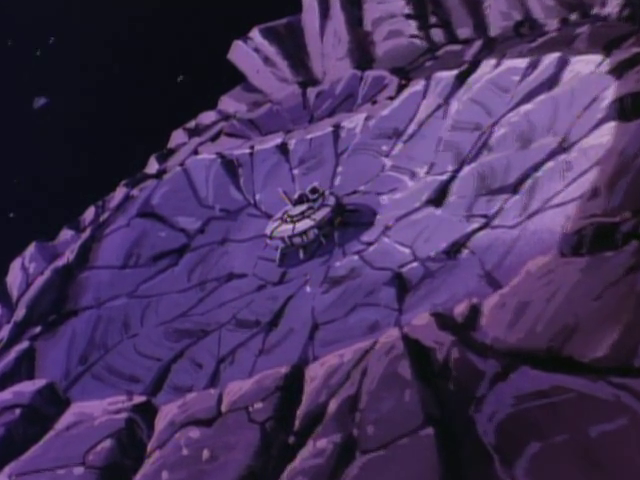 About two-thirds of this episode take place on Ceres, the largest asteroid in the solar system. I enjoy that the series continues to tour around the actual local real-estate of space. I also like the reasoning for the attack, to divert the Neo's attention to Mars and away from Winfield's real target. (We'll find out what that is in a few episodes.) 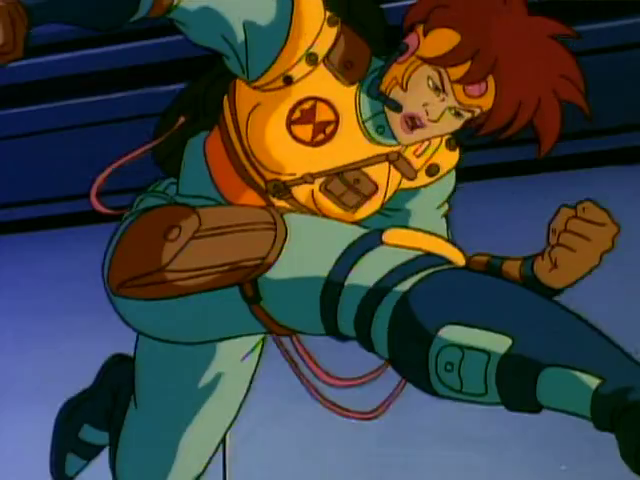 Weston busts out some pretty bad-ass moves versus the Neo Mega. That he then got the better of her does a good job of showcasing just how tough these little (7 foot tall) critters are.

What doesn't: The title of the episode, doesn't seem to work on either a literal or literary level. There's no clear last man in the episode, and the Mary Shelly novel features a post-apocalyptic world devastated by plague. No clear connection.

Where's Nara? This episode is taking place while J.T. and Marsala work with the resistance on Earth, so Nara really should be in command of Able Squad. Minor quibble, but there it is. 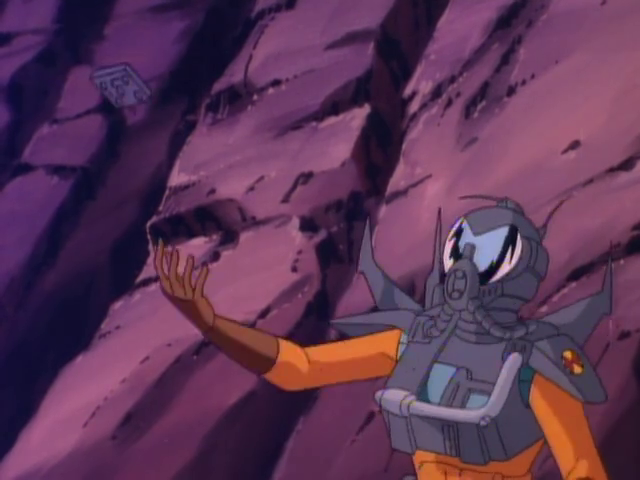 O'Reilly using the old comm to communicate misinformation was clever. Her blowing up her own chip seemed rather melodramatic.

The final scene in the airlock didn't quite work for me. Weston throwing a wrench against the escaping air strained credulity for me. Also, one would think that there would be a few failsafe mechanisms in place. I get that the writers wanted the Neo Megas to remain a mystery and didn't want the Exo-Fleet to have a body to autopsy, but it's a bit clumsy how they achieved it. 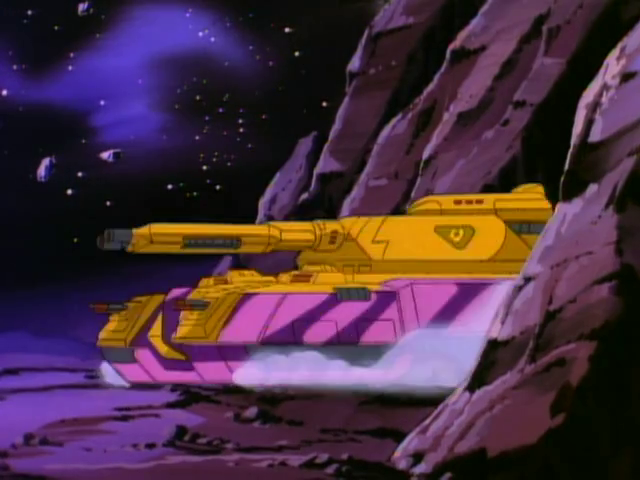 Watch for:  Neo Tanks make their first appearance. They'll show up several times in the future, and will play an important role in the final storyarc. (They're also damn cool, and would have made a great toy.)

Neo Megas won't be the only instance of Neo Sapiens tinkering with their own genetic make-up to attempt to gain advantage in the war. 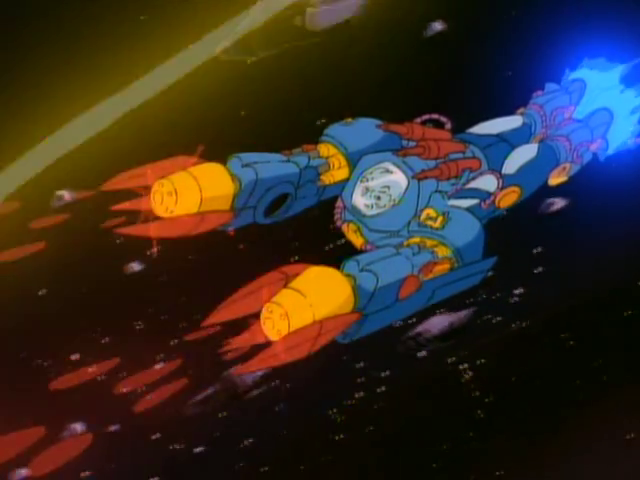 We see the Phaeton command-style e-frame used for the first time by someone other than him. That won't happen too often, though it will occasionally occur. I rather enjoy that, as having a unique frame doesn't really seem cost-effective and the Neos are eminently logical.

By the by, this is the first episode without any J.T. Marsh in it. No other character has been in every episode to date besides him, so now it's official that no-one will be in every episode. I rather like that.

Bio: Appropriately enough, Colleen O'Reilly. Since we barely know her, it's somewhat effective, though I can't help but think that the time would have been better used in the episode itself. Four cards in, I'm starting to think that I'm just not a fan of the idea in general. Interestingly enough, there will be ANOTHER version of this bio that features new animation depicting the graduation scene described here, which is kind of a nice value add.

Overall: Basically a solid episode. It needs to accomplish quite a few things and manages to do it all well.
Posted by Jimtron at 2:09 AM