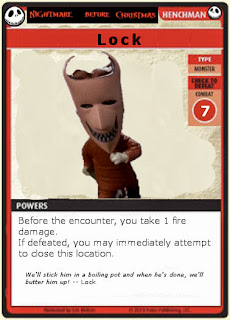 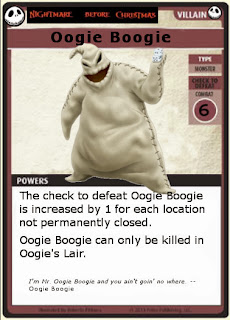 Love this movie, saw it in theaters which is still an experience that can't be duplicated. The thing I could personally latch onto in the movie was how misunderstood Jack was. In fact all the characters were that way & even with each other. Something I'm sure Burton could relate too. Although, I'd say he was stretching credibility when Jack abducted Santa (I mean, WTF).

I even had an ex (ages ago now, another life) that liked watching this movie, she'd sing Sally's parts allot.

Nicely done with the cards, Rob in Hood. I tend to make things like this a project, looking for fonts, high resolution images, making vectors until inevitably it kills the fun of it. I Don't play Pathfinder, but I'd be interested in seeing the other character too.

I'd love it if you could send me a copy of your homemade expansion files :)
If you had not done it, I'll put your name at the bottom of the cards before printing incase anyone asks where they were from. I started to do my own expansions this week but I'm also trying to find as many as i can to add in too :)
beavercountyboardgamers@yahoo.com