TFCON! (Plus, you know, Farscape Geekwatch)

Hola, amigos! It's official... I'll be one of the many guests at TFCON in a couple of weeks (July 27-29 in Ontario, Canada.)  If you're planning to attend, drop by and say hi.  If you're on the fence and in the area, I urge you to attend.  I've been to the one in 2006 (I think) and had a blast.  I look forward to showing off some cool Legacy artwork and answering any questions you might have. 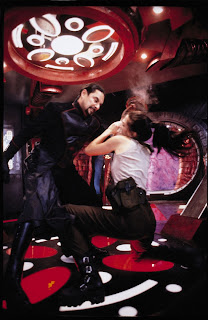 Also, my Farscape Geekfest continues!  First up, S02E01: Re:Union.  Note, this was NOT the first episode to air in S2, they moved up Mind the Baby since it's more of a conventional premier. I love that the writers took the b-team and lead off with them, though I can see why the network balked at this approach.  Since Crichton only exists in Zhaan's mind in this episode, not much in the way of Crichtonisms.  He says that the past few days haven't been a trip to Disneyland, and that's about it.  Nothing too geeky there.  Nothing much in S02E02 either, though it's an excellent story which sets up the S2 status quo. Crais seems to work MUCH better as a fugitive than as the main villain of the series.

S02E03: Vitas Mortis is a strong D'Argo character study. Crichtonism of the week is "so, if she wants to rip out your liver, snack on it with a chianti, she can do that?" a nice Hannibal Lecter reference.

S02E04: Taking the Stone is a weaker episode, a Chiana character study.  Nothing geeky, but plenty of Crichtonisms.  Not only does John do a Curly (from the Three Stooges), but he references Cool Hand Luke ("are we having a failure to communicate here"), wonders if his Excedrin headache was worth it, and calls one of the hippies Bob Marley. 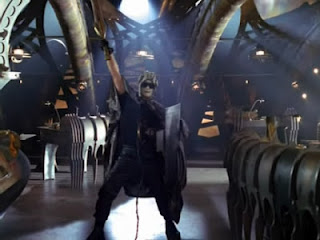 S02E05: Crackers Don't Matter is one of my favorite stand-alone episodes. Since the whole crew is going crazy, lots of rambling here.  One quite geek-worthy is when John says of T'raltixx, "give Brainiac a fluffy doll."  While it's true that the word brainiac has entered the lexicon, I still like to think of this as a Man of Steel reference.  The Shining gets a few nods, with a Scorpius hallucination (oh, they'll have fun with those) stating that "all work and no play makes John a dull boy" and John himself entering a room saying "Heeeeeeres Johnny!" John also hums Rite of the Valkyries, references Humpty Dumpty, Hawaii Five-O, Star Wars ("the Yoda factor"), Greek mythology (calling D'Argo Medusa) and Gilligan's Island.  Oh, and he inverts the Wheeties slogan when he asks if the gang is enjoying the "breakfast of loser."

I love how fearless this production company is.  Not many shows would intentionally make their male lead look THIS silly. (Check out the scene below)

is available for purchase on Amazon, and it's one of the best three tv space operas of all time.
Posted by Jimtron at 3:53 PM

One of these years I've got to make a point of going to at least one of any of these 'cons. It's on the list for sure.

On the strength and entertainment value of the Chrichton screengrab, I looked up the episode and that particular scene was the first hit on Youtube. Humor in sci-fi isn't new or anything, but done well is a rarity.

Awesome! Would you mind signing my copy of the ark?

Of course! Bring your books!