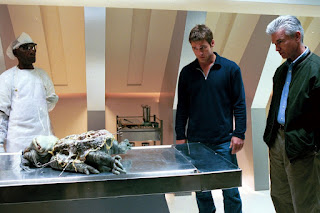 OK, the Farscape Geekwatch continues!  Still light, this season, but some good ones in there.

S01E16: A Human Reaction is a classic.  Crichton finds a wormhole back to Earth... or does he?  A solid episode, and it introduces (we found out a bit later) a very important element to the series.  Nothing solidly genre-related here, but John does a quick version of the classic Abbot & Costello Who's On First routine.

S01E17: Through the Looking Glass (the title itself a reference to Louis Carroll that pops up in the episode) is a fun tale of Moya getting split into four different dimensions. Of note, John informing Pilot and Zhaan that they can't see the missing crew members "Because you don't have X-ray vision...do you," a Superman nod. I also like his "Dis-a-Elvis-has-left-the-building-peared" line.

S01E18: A Bug's Life (the title itself a reference to the Pixar film) features no sci-fi nods, but I appreciated John calling the Peacekeeper scientist Hot Lips, after M.A.S.H. This episode sets up the next four to end the season.  Having John pretend to be a PK Captain is a great idea. 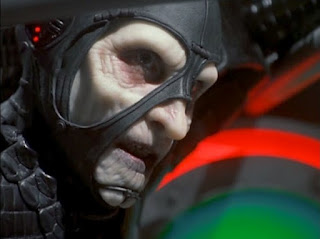 S01E19: Nerve features John's attempt to infiltrate a Peacekeeper Gammak base and introduces us to the amazing Scorpius and (the as yet unnamed) Stark.  It also reintroduces us to Gilina, from PK Tech Girl, and is an all-around great episode.

It's also chock-a-block with genre references.  There's a nice James Bond quote, when Scorpius introduces himself to John.  "I'm Scorpius." "But of course you are." John also calls Scorpy "Nosferatu."

BUT THAT'S NOT ALL!  There's this little line: "Danger, danger, Will Robinson," the classic phrase from Lost in Space.

And, finally, when he's sent off to the Aurora Chair to have his mind stripped, John quotes good old Monty Python's Spanish Inquisition sketch, "Fetch the comfy chair."

All right, this is where it's at!  Farscape: The Complete Series

is for sale on Amazon.com, and by now it's starting to look up. We'll see how the rest of the season goes.