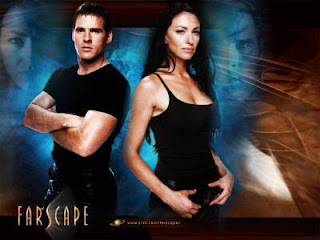 So, the wife and I have recently finished blazing through Battlestar Galactica, a fantastic series.  We decided to make Farscape our next sci-fi outing.

If you haven't watched Farscape yet, give it a go.  It starts awfully slow, I'll admit, but by the end of S1 it really hits its stride and becomes one of the quirkiest, enjoyable, character-driven space operas out there.

One fun aspect is that John Crichton‎ is a certified geek, throwing out references to other science fiction literature and media.  I figured that I'd pay extra attention to these and bring you the Farscape Geekwatch.

SO! For the first episode, Premiere, the Geekwatch begins with Close Encounters!  Specifically, Crichton's line, "boy, was Spielberg ever wrong. Close Encounters, my ass."

is  for sale on Amazon.com.  Spoiler alert: it's one of my favorite sci-fi series of all time.  I'd heartily recommend it.
Posted by Jimtron at 4:37 AM