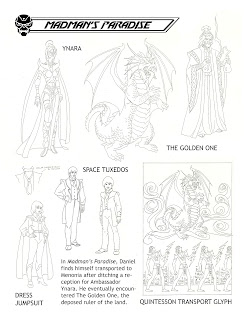 Welcome back! Though it's a bit out of order, here is part one of my exploration of Madman's Paradise. This showcases The Golden One, in both his guises, as well as the participants in the reception for Ambassadar Ynara.

Eagle-eyed readers will no doubt notice that I reused Spike in a tuxedo, which had featured in  Transformers: The Complete Ark

(order it today!) I think I've said this before, but the model sheet is labeled 'space tuxedo.' I just loved that, and really wanted to work it into the book, but there just wasn't room on the page.  Well, history nearly repeated itself.  I laid out this page and was just about to put it to bed when I realized I hadn't labeled it. Once again, space was tight, but I rejiggered things and fit it in with just a bit of cheating.  (Daniel's loose collar should be next to him, not next to Spike.  Thus is the price of 'space tuxedo.' Still, it's totally worth it.  Space tuxedo.  Say it out loud.  It is awesome.

Another observation is that the Quintesson transport glyph reused the dragon character model of The Golden One, unaltered. That's a bit lazy, especially since it's a 3/4th view and not a profile. Bill and I did the reverse for a page of the G.I. Joe Field Manual. In the Real American Hero episode The Gods Below, the team encounters several Egyptian gods.  Bill noticed that the models were whimsically drawn up to look like Egyptian artwork, either in profile or directly forward. He decided to lay out the page like an Egyptian tableau. It's one of the more unusual pages in the book, but I think it's really neat.  You can see it this summer when the book goes on-sale.

That's it for now! More Madman's Paradise next week!
Posted by Jimtron at 5:49 AM

"Quintesson transport glyph reused the dragon character model of The Golden One, unaltered. That's a bit lazy, especially since it's a 3/4th view and not a profile."

Perhaps they didn't want to bother much as season 3 background artists tended to botch things? Like they kept botching Cybertron - it had like a million different looks.