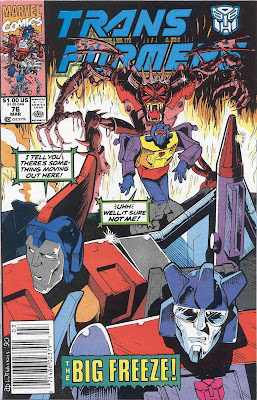 The seventy-sixth issue of the US G1 Marvel Comics run of Transformers is titled Still Life, to me conjuring images of those born dead.  It is brought to us by the team that had been producing such powerhouse work from #70-#74, with a nice Geoff Senior break for #75.  That is to say, it was written by Simon Furman, drawn by Andrew Wildman, inked by Stephen Baskerville, lettered by Rick Parker, and colored by Nel Yomtov.  Editor Rob Tokar and Tom DeFalco are credited as 'Need a Life.'    The cover is also a Wildman/Baskerville collaboration.

I don't care for the cover.  Dinobots chat in the foreground, while a few steps behind Grimlock stands frozen.  Behind him, a robotic demon rises from an inferno.  The whole thing seems awkward.  Wildman attempts to convey Grimlock's motionless status, but I don't think it quite comes across.  That's probably why the dialog is there.  The demon looks pretty cool, and probably should have been the real focus of the cover rather than Grimlock's predicament.  What IS fantastic about the cover is the Marvel box, which has replaced the usual Optimus Prime figure with a mangled version.  Macabre, guys, macabre! 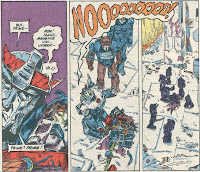 The book, though, is nothing but strength.  We open on a brutalized landscape, interrupted with panel after panel of the dead.  The battle was won, though at a very high cost.  Some beings stand clustered around a body, which when we zoom in on  we see is Optimus, delightfully mangled as on the cover.  (Actually, they borrowed this specific image rather than drawing a new one.  I suspect that the cover was done by Rob Tokar, whose involvement on the book continued to grow as things progressed.)  Despite his horrible injuries, Optimus is alive, sustained by the very matrix energy that set off the chain reaction that killed him.  Optimus calls for Prowl to come closer and whispers to him.  Prowl starts to protest, but Prime insists… and the passes.  Prowl's grief is beautifully realized by Wildman's art, though I wonder if it's Prime's passing he mourns or what Prime told him.  It's a touching scene.  Wheeljack's pain manifests itself in some overly specific details about the process, where Prowl just cuts loose.  Even Bludgeon hangs his head respectfully.  Wildman's tendency to humanize the robots, especially around their eyes, helps sell the pain here.

Cut to the Autobot/Decepticon headquarters.  Prowl informs Grimlock that he's been named the new (old, actually, but who's counting) Autobot leader.  The Dinobot (now Autobot) leader gruffly tells Prowl that he'll "get right on it," but has something important to do first.   Prowl explodes (verbally) at him, telling him that the peace process needs work here and now, but Grimlock is more concerned about tracking down the missing Ark and those injured Autobots still onboard.  Prowl makes Grimlock vow to uphold the Autobot Code before allowing his new leader to stomp off.  As Blaster brings some unspoken bad news to Prowl's attention, Bludgeon and Krok decide to examine… options.  It's an extremely dense three pages, centered around the confrontation between Prowl and Grimlock but introducing other new story elements seamlessly along the way.  Prowl is one of my all-time favorite Autobots, and I love the tension between him and Grimlock.  Their leadership styles are so different that they just couldn't possibly get along.  In some ways, I like to think of the Autobot leadership as Prime, Prowl, and Grimlock, sort of mirroring Megatron, Shockwave, and Starscream.  Come to think of it, I'm surprised no one has ever done a brilliant Shockwave vs Prowl book. Hmmm.....

There are two interludes interspersed through the main plot.  After Prime's death, Hi-Q flees from the Demon on the cover while musing about the nature of the pain he and Optimus had been experiencing.  They thought it was incompatibility, but Hi-Q now realizes that it's so much more!  The other sideplot focuses in on the schemers Shockwave and Starscream.  They're responsible for the missing Ark, and what's more is Shockwave suspects that there may be serious imminent danger to Cybertron itself from the recent quakes.   A dark and sinister figure watches them from the shadows... it looks like Galvatron survived Unicron's blow.  Really, how could he not?  I love this style of storytelling, with a bit of buildup for future plots to keep the main one fresh.  Oh, and Tokar's having some fun with the book, commenting on the 'elsewheres' with notes like 'Or, elsewhere once removed.'  Perhaps the knowledge of cancellation allowed him to be a bit more whimsical.  Anyway, it works. 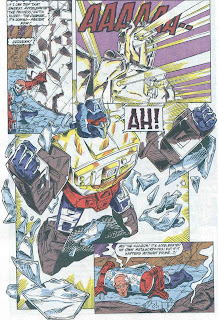 Into the field go the Dinobots, where Grimlock explains his philosophy to his troops.  We get a page and a half of him just pontificating about how the Autobot/Decepticon war is actually a racial one when he finally seizes up for good, building on the Nucleon plotline that has been popping up here and there.  This become a major tactical disadvantage when Hi-Q shows up with the demons close behind.  The Dinobots resolve to fend off the creatures, despite Grimlock's orders to retreat and leave him to his fate.  Hi-Q, though, manages to save the day when he sees that Grimlock's immobility is the first stage of a kind of chrysalis, and uses his own Powermaster abilities to accelerate the process.  This inadvertently causes his own metamorphosis to come to completion, but we'll get to that.  In a gorgeous blaze of light, Grimlock's new design is revealed.  Everyone does a great job here, especially Yomtov.  All of the robot forms have been getting progressively more and more dinged since issue #71 and the non-stop action that the 'bots have seen, so it's nice to see a beautiful, shiny new form.  I also like the flow from philosophy to battle, in true comic book form.

Yes, Grimlock's an Action Master now, though thankfully they never use this name.  He drives off the beasts, then prepares to execute one until Hi-Q gives an impassioned speech about the sanctity of life.  It's so much more powerful than Prowl's angry rhetoric, though the message is the same.  Grimlock lays down his sword and allows the creature to flee.  After all, they're 'still life.'  Back to base they head, no Ark to show for their efforts, when we learn that Grimlock can no longer Transform.  Thus we learn the price of Nucleon.  Slag notes that Hi-Q sounded a lot like Optimus Prime when he was pontificating.  "What do you mean 'like', Slag?" asks the Nebulon.  "I AM Optimus Prime." 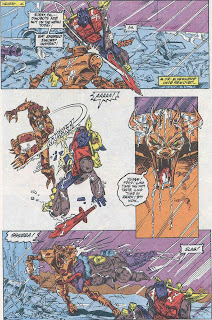 What a weird cliffhanger to end on.  By this point, the axe has fallen and Furman knew he had to start wrapping things up, so the seeds of Optimus' resurrection are planted early.  Amazingly, the clunker of a concept that is Action Masters manages to be pretty cool.  It's hard to believe how much pathos Furman managed to wring from that concept.

I'm glad to see the return of the Demons.  They haven't shown up before in the US, but there was a three issue UK storyline centered around them that was rather fun. They work very well with Wildman's style, though I kind of wish I'd gotten to see Delbo's take on them.  He always had a lot of fun with monsters.  This is a terrific battle, very dynamic.  I like how the battle breaks through the panels, keeping your eye moving rapidly.

Overall, a strong book.  It's natural that we'd slow down a bit after the thrill-ride that we've been experiencing since issue #69, while starting to build up some new ideas.  Cracks are showing in the Autobot/Decepticon alliance already, and seriously, what the hell is going on with Hi-Q?  He IS Optimus Prime?  How?  What does that mean?  It's interesting stuff. Still Life! is available in IDW's  Classic Transformers Vol. 6

at Amazon.com. Oh, and please forgive my week off, I was in NY visiting relatives for Thanksgiving and had no time to blog.
Posted by Jimtron at 1:00 PM

I always read the title as "still life", like the paintings; a take on Grimlock's brief stint as a statue. (And of course, it ties in to Hi-Q's speech at the end, as well.)

When I initially read this ish as a kid, I didn't think much of Hi-Q's line at the end of the book. I just assumed that he was Prime in the same respect that Spike Witwicky was Fort Max. The full import of the revelation didn't hit home until next (?) issue, with Rapture declaring, "This guy? He thinks he's Optimus Prime!"

Agreed with Salt-Man Z's first paragraph (although the commonality between the terms "still life" and "stillborn" is going to be tough to get out of my head now).

Always loved this issue. It led to me wanting (and I still do) an Action Master Grimlock figure. I just loved the new appearance, and only later after some scrutiny would I learn that AM Grimlock's details were actually more or less the same as the original Grimlock toy's.

Yeah, it looks like the designers wanted to emulate the cartoon appearances in the Actionmaster design. That actually made me like them as a kid. But then there was actionmaster Devastator, being slightly smaller than actionmaster Bumblebee... and that annoyed me :)

Another great issue, although I really don't like Wildman's portrayal of what's behind Optimus' faceplate. In my opinion it should always have been a regular mouth, not a speaker. It doesn't jive with the fact that Optimus' jaw moved when he spoke in the cartoon... :P