Review: War of the Worlds, the series ep 36 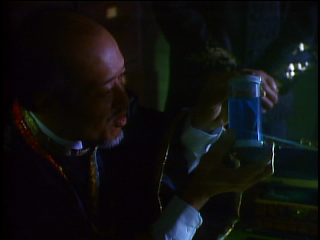 The Deadliest Disease is the thirty-sixth episode of War of the Worlds, the series.  When the aliens face infection by Earth's bacteria, they turn to a contact in the US military for solutions, seeking to trade hyperdrive technology for an advanced med-cell capable of repairing organic tissue.  Their plight is complicated when they find the device has been stolen.  Malzor and the military, represented by one Colonel West, each attempt to retrieve it.  Wouldn't you know it, but West turns to the old Blackwood team to get it.  Both track the device to The Exchange, a black market structure run by a Chinese man, Tao, an Iranian, Abraham, and a black man, Walla.  Holding this together is Brock Security.  Malzor and the Blackwood team each infiltrate Brock Security (via clone and subterfuge) in time to kick off a five way war for the invaluable device.  In the carnage, Tao and Brock each lose a son, Malzor gets the device and removes the infection, and the Blackwood team... well, they really don't do much besides wander through the carnage.  It's not really their story. 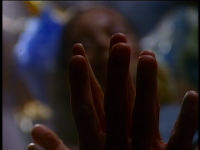 The Good: Let's start with character moments.  Malzor and Mana have never been closer than this episode.  When she gets infected, eh seems genuinely concerned, a nice deviation from their usual tension.  "I've failed you," she mourns, but he replies "No, we'll conquer this.  We've always been successful... together."  It's a nice I / we switch.  He seems almost tender.  He also puts himself in harms way to attempt to retrieve the med cell when it's apparent the clone is defective, something that he might have been more reluctant to do had Mana not been at risk.

This episode is a more-or-less total success for the aliens.  Now, they lose two soldiers, but they get the device and stave off the infection.  Malzor killing the Colonel at the end and calmly walking away was a nice moment.  Deal with the aliens at your peril, people! 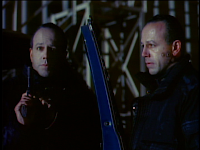 The defective clone of Brock decides to take his fate into his own hands and rescues his original.  It's a neat exploration of the cloning idea, one that would definitely not have worked with the S1 osmosis technique.

Many folks have aliases this episode.  Malzor goes by Mr. Malcom again when meeting with the Colonel.  Kincaid infiltrates Brock Security as a Mr. Wolf.  Blackwood talks to Tao as Mr. Milcroft.  Each name seems to suit their personality somehow. 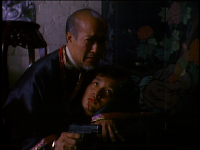 The idea of the machination of two fathers accidentally killing their own children is old but still powerful.  It was a touching moment, at the end, as they both mourned their loss and put down their weapons.

Finally, the irony of a device intended to heal kicking off all this violence is rather nice.

The Bad: Sadly, big picture-wise, this story doesn't really work.  It's a confused jumble of really interesting elements that can't quite decide what kind of story to be.  Is it about racism?  Generational conflict?  Greed?  There are some interesting sci-fi elements mixed in, but they feel tacked on, not organic to the story.  A clone and the original running around is neat, but thematically disconnected from an already muddled mix of elements.  I get the sense that "The Deadliest Disease" is meant to be whatever's driving this story... but what that is isn't exactly clear.

Also, the team is really not the focus of this story.  Kincaid manages to insert himself just a bit, but even then he's pretty far from the emotional center of the story.  It's also a big coincidence, the team working for West who's working with Malzor.  I like the irony of this, but it's not really explored in any meaningful way, meaning it's a flaw without a redeeming flip-side. 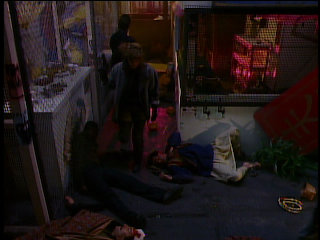 I'm not sure what's going on with race in this episode.  We've got a five way war, between Arabs, blacks, whites, Asians, and, um, Morthren.  Racial epithets like 'chink' are thrown about.  Again, I feel like the writers were trying to make some kind of social commentary... but it gets lost amid all the other elements.  Tao seems almost a caricature, so it hardly seems like they were going for a post-racial world.  I just don't quite get it.

Using bacteria as a motivator feels REALLY redundant.  The whole first season was about that, as was the movie.  This ground feels very well trod.

I don't like to pick on production values, but the fight between Kincaid and the Chinese soldier is awkward.  So is the disolve from the sick to the healthy mouse intended to demonstrate the efficacy of the med cell. 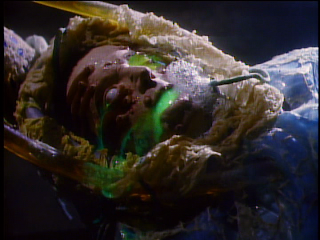 The Ugly: Plenty of ugly in this episode, but I'll go with the moment the alien dies of the disease. The various infections that were impacting all of the alien's organic technology was pretty cool too.

The Deadliest Disease.  An episode with potential that seems to have been killed somewhere in committee.  If it just decided if it was a story about race, or about generational conflicts, or about greed, it might have been quite good.  Oh, well, c'est la vie.  Hey, and for those keeping score, take a drink.  Yup, General Wilson was namechecked for the first time in over a dozen episodes.   War of the Worlds: The Final Season, is available  for purchase on DVD, if you'd like to check it out.
Posted by Jimtron at 11:12 AM

Great review, Jim. I agree with how this episode just really didn't work. When I saw it, I remember how the whole theme of race seemed to be an important element, however, the execution seemed to be pretty poor. All of the characters and different races that are involved in the war at the Exchange seem to be cardboard racial stereotypes. The use of racial epithets also seemed a tad too much as well. If there was a real purpose to it, I could understand it, but it never really made much sense. And the episode dragged while the Blackwood team sits idly by on the sidelines.

I think the sole interesting thing in the episode are the aliens- particularly the Mana and Malzor scenes. I thought Denis Forest and Catherine Disher both did a fine job showing some range with the characters. I also liked the fact that the clone was also a wild card. All of that was fun- but for the most part there are a potpourri of ideas that just really couldn't connect at all.

I liked the idea of Colonel West reaching out to the team but nothing really happened from there.

All in all, a weak episode- that is only interesting for the Mana/Malzor interactions.

there were a few elements that made this episode feel low budget to me:

1. the marketplace is very dead; void of required occupants. some of this is the timing of scenes (off hours), but still feels... like a fake.

2. action sequences are let down by guns which do not actually fire, but the sound effects artist inserts the very recognizable and overused gunshot sounds endemic to this season of WOTW and several other series by these same production people. it feels... fake. again.

it's hard for me to decide if these problems are the entire source of my problems with the episode alone or if the editing was also a problem... story-wise, aside from some heavy handedness... i liked the content. especially the bits you mentioned about the clone going rogue (but not to good-guy status) and Malzor being caring, almost out of character, in reference to Mana's ill-health (especially disjointed once you see his behavior near and at the end of the series).