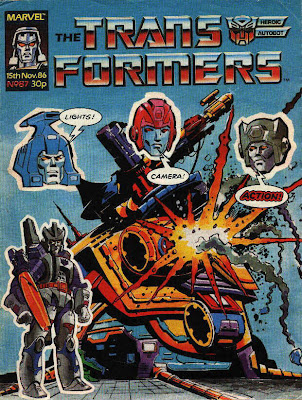 The cover is by Geoff Senior and is actually pretty bad by his standards. It shows Galvatron's anti-Unicron weapon exploding while the disembodied heads of Blurr, Kup and Hot Rod say "Lights", "Camera", "Action" - using the same movie metaphor that Furman is about to employ in the issue itself. The heads appear too disconnected from the main picture and the speech bubbles are too cute to be witty and come across as merely annoying. Added to this there is a picture of Galvatron badly inserted into the bottom left corner. At first glance this depiction would seem to be a simple cut and paste of the character model but actually it's a Senior original, just utilising the same pose. While drawing a new model is praiseworthy it still doesn't really make up for the fact that Galvatron is just stuck there. He clearly isn't part of the action of the picture, but he's not saying anything either. It's just as though he's there so the reader doesn't forget who the bad guy is.

The issue opens a little while after the end of Part 8. At Galvatron's base the future Autobots are doing something that involves spraying Skywarp red, planting some kind of device (presumably explosive) and knocking out Scourge and Cyclonus. They do this while Furman's captions somewhat unnecessarily evoke the preparation of a movie set: "Applied makeup", "Rigged special effects" and so on. Furman enjoys these linguistic diversions and normally I find them very entertaining, but this one irritates me, probably because we are driving to a conclusion of a very long story by this point and I'd rather he cut to the chase.

Galvatron is holding an incredibly battered Ultra Magnus up in triumph. His triumphant raving turns to shock however, when he finds the badly damaged and unconscious bodies of Scourge and Cyclonus. Of course, Galvatron does not know about the presence of the three future Autobots so he immediately leaps to the conclusion that this is the result of treachery by Starscream which turns out to be exactly their plan.

Just as Kup is about to hit the button on whatever device they are planning to use Magnus finds a reserve of strength and begins to haul himself back towards Galvatron, the image of Operation Volcano large in his mind. He recaps previous events as he tells us that he needs to get Galvatron to return to the future and he's running out of time. 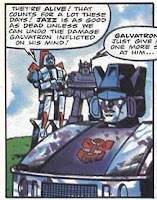 Elsewhere, the present-day Autobots are discussing their situation. Jazz stands eerily still, without Galvatron's control he is brain-damaged and basically dead. Jetfire wants to quit, as Galvatron is so powerful, but Smokescreen gives him an impassioned speech about how they have to stop Galvatron in the here and now or there's no telling what damage his time-travelling could do. Jetfire listens impassively.

Back at Galvatron's base Magnus manages to tackle the future Decepticon to the ground. Galvatron soon bests him though and begins to beat him savagely, asking in amazement whether Magnus' Autobot code "demands sacrifice?". "Must I destroy you to stop you!?" In my favourite image of the story Magnus raises his head as best he can, battered and shadowy, bleeding oil from a thousand cuts and simply says "yes". The artwork is perfect in this scene and Ultra Magnus is every inch the perfect noble Autobot warrior. Destined to fail, but determined to try. All our favourite heroes never back down in the face of unbeatable odds and Ultra Magnus is well and truly in that position by now.

Just as the future Autobots are about to trigger their plan the present-day Autobots show up and ruin it. This grants Ultra Magnus a reprieve but puts them in grave danger both from Galvatron and from the bomb that Kup is about to set off. Determining that they cannot wait any longer, Kup detonates the device.

The Autobots manage to flee before the worst happens but Galavatron is rooted to the spot in amazement as his cannon explodes in a tremendous fireball. He is crushed to the ground by falling debris but is only dormant for a few moments before his hand bursts from the wreckage in true horror movie style and he is back up and ready to kill. 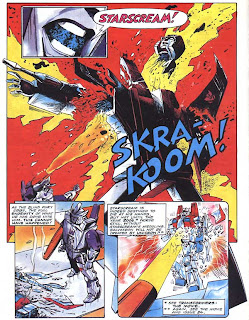 Looking for the culprit he finds Starscream standing impassively. We, the audience, can see that Starscream's voice actually comes from a speaker on his back but to Galvatron it appears that he has been betrayed and mocked. With one furious particle cannon blast the Seeker Jet is torn into pieces. This sets off alarm bells in Galvatron's mind because he knows that Starscream should not die until 2006 (and the events of "Transformers: The Movie").

Galvatron concludes from his continuing existence that his time travel must have caused him to slip into an alternate universe - one where his actions do not affect his own personal future. Emboldened by this news but presumably figuring that building his cannon would have made no difference to the future of this timeline, Galvatron gathers the recumbant Scourge and Cyclonus and returns to the future.

This leaves Blurr, Kup and Hot Rod in possession of the body of the real Starscream. It turns out that the decoy version that Galvatron destroys was merely Skywarp painted red. Why did they do this instead of using the unconscious Starscream for the exact same plan? You'll have to wait for the aftermath to find out.

The last proper part of Target: 2006 is mostly very good. The movie metaphor on the first page is extended to breaking point and was not very appropriate to begin with. Furman is definitely letting his own cleverness get the better of him here. 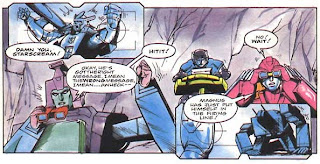 Similarly, Furman does not seem to know what to do with the 1986 Autobots. They get their moment to stand up and be counted, which is great, but Kup agonises about blowing them up, does it anyway, and they emerge unscathed. Surely we could have sacrificed someone like Bluestreak to give the decision more weight?

Thirdly, the art and the text seem contradictory when Galvatron decides he is in a parallel universe. On the one hand he believes that having killed Starscream and still existing means that he is not accountable for his actions within this timeline but on the other the art seems to show him rubbing the paint off of the dummy Starscream, which should make him doubt this assertion.

Niggles aside, this is an excellent and somewhat downbeat end to this saga. Ultra Magnus is the standout character, never giving up after getting the most terrible beatdown but in the end no-one really wins, which is a very atypical conclusion to this sort of good vs evil storytelling. Galvatron cannot be beaten in 1986, not by Ultra Magnus, not by Jetfire, not by an Autobot-Decepticon alliance led by Megatron himself. He is not even damaged when his gigantic cannon with all it's terrible reserves of energy explodes right beside him. It can be argued that he is forced to flee and abandon his plans but it is with a renewed sense of purpose rather than in defeat. Connecting the dots should lead the reader to realise that since Starscream's destruction was actually a ruse Galvatron is actually in for a world of pain from Unicron when he returns to 2006. However, at no point is this spelled out and Furman obviously decided to leave the final word on how time travel and dimension hopping really works in this universe for a future story. When Galvatron leaves, in the context of this story, it is very much on his terms. 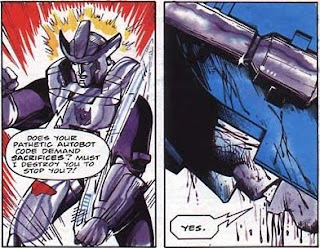 Jeff Anderson returns here and provides us with some very nice artwork. I do not like it quite as much as Senior's from the previous issue but it is still fantastic. I am a big fan of Anderson's depiction of Ultra Magnus. He really gets his strong, blocky, dependable look down and is fully capable of rendering all the anguished expressions that a beating from Galvatron would result in. Jeff Anderson makes us feel Ultra Magnus' pain and, despite being excellent on it's own, Furman's writing would not be sufficient to make us feel for this character if he were not backed up by the artist. Since the emotional core of this issue is the Autobot sense of self-sacrifice I have to hand it to Anderson for making me wince at every fresh punishment handed out by Galvatron.

The main part of this story ends in a murky finale that is more about the characters having to rebuild than a triumph of good over evil. Surely an epic of such magnitude will have repercussions for many issues in the future? We might get a glimpse of how much the Transformers universe has been shaken up in the next issue, the special Target: 2006 aftermath story. IDW's trade of  Transformers: Target: 2006

is available from Amazon.com.
Posted by Bishbot at 1:06 PM

Nice review, very well written. One possible correction however; I had thought that the faux-Starscream was a facsimile mock-up and not Skywarp. Wouldn't killing Skywarp also upset something in the space-time continuum if he's fated to die and reformatted by Unicron?

Possibly not. There's a number of discrepancies between what happens onscreen in the movie and what's reported in the UK comic stories, largely because Simon Furman had only read a treatment of the movie when he wrote Target 2006 (and later on some of the artists don't appear to have checked background deaths). The year 2006 itself and "Life Spark" are amongst the best known of these.

For what it's worth the Marvel adaptation doesn't feature Skywarp at all and instead appropriately has Dirge amongst the dead.