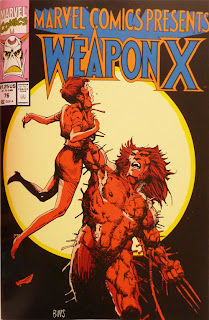 The cover image concerns the star of lead story, Weapon X (to be fair, poor Wolverine hardly gets any cover appearances), but Death’s Head does get to scowl from the corner box.

The story begins on the planet Yel-Jek in 8162 (so presumably this happened between issues 7 and 8 of his regular series, about the same time as the Munchkyn Contract – or else he used his TVA time-scooter to return there, whichever you please) and Death’s Head is in a jungle environment. Muddy and distressed, he is running from a stampede of massive ungulate-creatures.

A short burst of boot-jets puts Death’s Head out of danger, although the cheap fuel fails and dumps him back on the ground. He is then discovered by Thaddeus Soul, a big-game hunter dressed in paramilitary gear (right down to the Rambo-style headband) with an assortment of weapons. 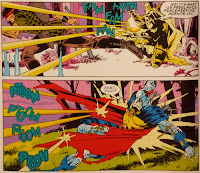 We learn that Soul is Death’s Head’s target, but has turned tables on the mechanoid and has been hunting him since he landed on the planet. Being a sporting chap, Soul has been toying with Death’s Head for the sheer thrill of the hunt. After talking, the shooting starts. Soul proves the superior marksman and soon Death’s Head is back on the run.

Trying to regroup, Death’s Head encounters a green-skinned alien, wounded and helpless. The alien tried to protect the jungle’s animals, but has been left for dead by Soul. Death’s Head is uninterested in non-paying customers, until the alien offers to pay with information: how to kill Soul.

Sometime later, Soul is following Death’s Head’s tracks. He is confused by the evidence that his prey seems to be carrying extra weight, but dismisses it as the irrational behaviour of a doomed animal. The tracks lead to a watering hole of the giant ungulates – named Stakks – and Death’s Head bursts out of the water to attack. 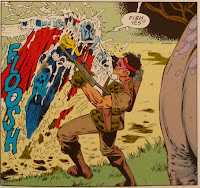 Soul again bests the mechanoid – electrocuting him and sending him back into the water, helpless and his mercy. Death’s Head springs his trap: the alien he saved emerges and blows a leaf-whistle. Apparently Stakks have acutely sensitive ear drums and, upon hearing the sound, one of them drops dead – right on top of Soul (clearly the alien’s desire to save the animals didn’t stop him from sacrificing one).

Death’s Head congratulates the now-dead alien – although he characteristically fails to understand the revenge motive. Then he faces the problem of retrieving Soul from beneath the elephantine Stakk, as his employer wanted a trophy. “Hrm… Hope the Governor’s got a big wall, yes?”

This is a decent short: Death’s Head on a hunt, trying to figure out a way to get the better of his quarry. It skips along at a good pace and ends on a nice punchline. Not having to worry about fitting in room for character development, this kind of short story suits the mechanoid (although sadly, this was where the momentum from his original series finally petered out ).

The off-planet setting adds an extra element. I think Furman could have gone much further in this direction with the series as a whole, giving the bounty hunter new scenery and challenges, rather than trying to world-build on Earth 8162.

Thaddeus Soul is acceptable as an antagonist: nothing too spectacular, the sort of military-survivalist that seems credibly formidable without needing too much explanation. It comes across as plausible that he could give Death’s Head the run-around. His use of game-hunting metaphors seems right for the character, although it’s a little odd that he would view the mechanoid as a ‘dumb creature’ (an unfeeling machine, yes, but animal instinct isn’t often attributed to robots).

It is unfortunate that, in real-time chronology, we’ve recently seen Death’s Head as object of another hunt. Soul can’t compare with Lupex, nor does Death’s Head’s predicament ever seem so dire. Not that an 8-page story should compete with the graphic novel, but the parallels are hard to avoid.

Death’s Head acquits himself well in this adventure: resourceful, excelling in ambush tactics and casually pitiless to the pleas of the dying alien. As always, his personality is dry as a bone: reacting to the loss of power mid-flight with nothing more than a brief, “Hrm.”

It was reading this issue that I realised: in all his stories, Death’s Head doesn’t actually display any tracking skills. Once or twice, he’s used enhanced optics, but never any evidence of truly superior senses. He usually gets results with good investigative work and patience – making him a detective, not a hunter.

The art team reunites Hitch and Farmer, something I’ve wanted to see since Issue 1. The action scenes – mostly Death’s Head leaping in or out of trouble – are solidly enjoyable. But the good work is undermined by the colours, which look over-simplified or poorly-chosen. This may be the consequence of the US printing, but it would have been good to see what a colourist from earlier work, like Nick Abadzis, could have done.

There are two more stories left in the collected works, but neither of them make sense without the context of Death’s Head II. So next week I’ll be starting on the mini-series that saw Death’s Head take on Minion: The Wild Hunt #1 - Mergers and Acquisitions!